Deep in the heart of the labyrinth, something waits. One by one, the men and women of the elven militia have gone in, and all of them have failed to return. You are all that's left of their once-proud army. But you have a mighty sword and indominable will to survive... Oh, and mastery over arcane magics. That helps too. Elventales: The Arcanery, from Elven Games, puts you in the greaves of this lone adventurer as you plumb the depths of the savage dungeon that has already taken so many lives. Which will probably include yours. Several times. This action RPG has a hefty amount of roguelike in its ancestry, which means the challenge level gets fairly high. But if you have no patience for the stat-building and micromanaging of most roguelikes, don't worry... Elventales is a simplified and streamlined experience that removes turn-based battles and cuts you free from the grid for a more open and active experience. You can walk anywhere you like with [WASD] or the [arrow] keys, interact with anything nearby with [E], and attack anything in front of you with [R] or a left mouse click! You can spend the currency monsters drop on unlocking new spells, which you can then bind to the number keys. It's more accessible to be sure, but it's still got plenty of teeth! 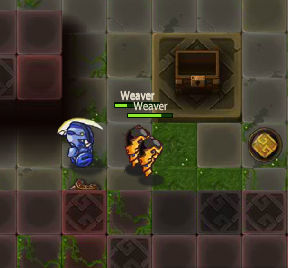 Unlike most RPGs, which base their progression on experience points and level grinding, Elventales revolves entirely around loot and achievements. Killing a certain number of monsters or finding a certain number of items will give you small stat gains, but most of your character-building will be done by collecting new equipment or spending money on new spells. Every equipment piece and spell has its own distinct advantages and weaknesses, and the higher-tier ones aren't necessarily "stronger". This makes the system surprisingly deep despite being minimalized, and allows for an excellent degree of character customization, especially since you can craft new items out of the old.

The game's real-time combat has an almost puzzle-like aspect to it, as most monsters have weaknesses to specific spells that you'll need to exploit before finishing them off with melee attacks. But rather than being based on some elemental circle you'll need to memorize, these weaknesses arise naturally from the monsters' other attributes; for example, monsters that dodge frequently are weak to spells that lower their evasion. This makes learning about new monsters far more intuitive. However, for all its user-friendly features, it's still a roguelike, and that means it can still be brutally difficult. You can only save at certain, infrequent points. Random traps and powerful monsters mean your death can be very swift and very unexpected, and dying sends you all the way back to your last save. There is an element of luck in what kind of monsters you'll face and where you'll find traps, which can be frustrating if you get unlucky. However, you can always develop a strategy, no matter what you face, and the game provides ample places to heal. If you're looking for a challenge, Elventales: The Arcanery is a game that proves "simple" doesn't have to mean "shallow."

I beat this on AG.com, and I found it buggy. You can die randomly on floors 4&5 w/o any warning. You never learn the identity of "The Poet", though (s)he tells you many things about the game. The achievements and the forge are cool. 3/5 stars.

Ok, I'm all for traps dealing damage randomly, that tends to keep you on your toes. But the lightning trap has always killed me so far, even from full health with almost maxed out gear. To me that seems... cheap. So-called fake difficulty (Unless there is some sort of trap indication that I'm missing). It'd be a good game for its genre, but that one issue does more harm than good, in my opinion.

This game rings of a "well-done first effort." There's a lot that's done well here, but nothing too original, and then the parts where it isn't done well seems like the dev's inability to properly balance the gameplay. Game is too easy? Random traps.

I'm also not a fan of how the melee works. Very unpolished.

It looks great, the graphics make me want to keep trying. But the random hurt is bogus. I got stuck on the same save point over and over because things randomly explode or throw rocks under me, and the save point is surrounded by mobs. I can't get off that one spot! Balance is indeed the issue.

Same as others have said. I keep getting killed by treasure chests of all things -- I'm on level three with all items in supposedly the best armour tier, and chests keep killing me.

The cool-down time on even mid-level spells means I also spend a lot of time tabbed out, since a couple of the monsters are literally unbeatable without a specific spell class. Maybe that's intentional, but it has the feeling of a hobble.

If it were only chests... the traps seem to trigger when randomly walking, with no chest in sight.

Could have been a great little game. I got through the first 3 floors without dying, and just nearly got to the end of floor 3 when I died. I had to start over from the last save which was back at the begin of floor 3, no problem...

I loaded up my save, and now, enemies and situations that were giving me no problems at all in my first run through, were killing me instantly time and time again.

This turned what I thought was an amazing little game, very well built and tuned, into something maddeningly frustrating and actually unplayable.

I would have preferred the original pacing it was on, before my first death to continue, rather than employing "fake/cheap difficulty" in order to lengthen the experience. Hell, if it weren't for this bad taste/design, I would have gladly purchased a sequel or well made level pack to lengthen an otherwise great experience.

Frustrated and I'm done with this.

I'd say it scales pretty well and is of exactly the desired length... except for the random instakills. That's just ridiculous. Get rid of the insta-kill traps and it'll be really nice.

Basically, same as the rest of the comments. Not much more to be said.

> Kyh— All of your nightmares pales in comparison to space leviathans who eat whole planets! But, of course, this is what you're forced to face in 8Bit Skull's action adventure title, Zos. It's been thousands of years, and the great monster, X'o'chthu,is back for another round of celestial chomping. It is up to you to gather the lost essences of heroes-past and use their powers to fight it off once again.  ...

> Dora— You awake sore and amnesiac in a hospital... but the place is deserted. Notes from a stranger lead you on a bizarre journey through a town that has more than its share of secrets in this creative and ambitious action RPG adventure that blends existential horror with a science-fiction thriller.  ...

> Dora— Plunked into a 2D, side-scrolling world randomly generated and populated with dangerous dungeons, and you'll need to smash, stab, dig, and otherwise destroy your environment to gather the supplies you'll need to craft and survive day-to-day. Turns out in a great battle, the kingdom was destroyed and all its people carted off to dungeons, and only you can save them.  ...

> Dora— Connor Ullmann fires up the Wayback Machine for those gorgeous little retro action adventure inspired by classic 2D games like Zelda. As a little boy who was apparently born from a breath of wind, your quest for self-discovery and the wishes of your maker will take you across a huge world teeming with enemies, secrets, treasure, puzzles, and more. A beautiful little gem with classic gameplay and a satisfying adventure that is well worth checking out even if you weren't born when games like this were in their heyday.  ...