Edna has no idea why she's locked in this cell, a room covered with oh-so-soft padding and guarded by a mini-golf loving daddy's boy. Sure, she has a talking stuffed rabbit named Harvey, but hey, doesn't everyone? Being in such a situation, the main course of action is to break out, which produces the title Edna & Harvey: The Breakout for this darkly humorous puzzling adventure from German studio Daedalic Entertainment. The real underlying problem here, though, centers on a question: what really happened to land Edna in this strange place and why is her memory so slushy? 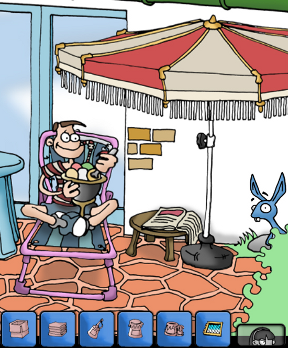 It's a good thing that Edna has Harvey, who is able to morph temporally to select instances in the past in a chatty plush bunny version of Quantum Leap—minus the setting other people's lives right part, that is. Between the two of them, your job is to talk to everyone who will listen, piece together hours worth of dialogue, and experiment with every object you can get your hands upon to help Edna escape her captors while uncovering the mystery of why she's there.

All these actions are completed via the touch screen options on your device; tap all over the screen looking for iffy spots to explore further. When you find an interactive spot, a circular menu gives you the choice of "talk," "examine," "use" or "take." Tapping the [?] icon will briefly indicate hot spots in case you're having trouble finding them on your own and, trust me, there are a lot of places to explore. Items you pick up as Edna are accessed from the knapsack while Harvey's thought inventory is kept below the screen. In your search for answers, you'll encounter multiple characters to banter with, seeking to utter the magic phrase which will open doors and elicit helpful information.

Originally released as a Windows download, Edna & Harvey: The Breakout's interface will remind you much of the old school LucasArts style of adventure games replete with plenty of scenario, exploration, and corny one-liners, all seeming to work against your narrowing down the one right thing to say or constructing the correct course of action to successfully reach the end of this strange adventure. 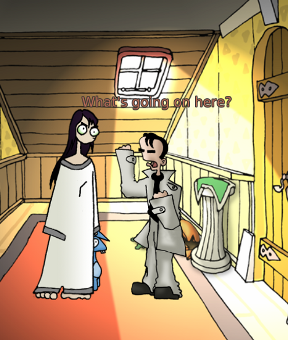 Analysis: Somewhere along the line in casual gaming evolution and within the plethora of lovely-yet-simple browser-based point-and-click games, today's adventure games have become more focused on standalone puzzles and less focused on the try-everything-on-anything method of adventuring. Like the old PC games of the past century, Edna & Harvey: The Breakout is not an easy jaunt of gathering a few overt clues and firing up the logic center of your grey matter.

The near endless possibilities for exploration yet only one, often abstruse, solution means players can easily lose large chunks of time trying to move past one room. Heck, past one obstacle in one room. If you're not the patient sort and if you're not enamored with the awkward hit-and-miss writing, you might soon give up on Edna & Harvey even before finding the elusive Chew Toenail Trick. On the other hand, fans of story adventure series such as Sam and Max are sure to gravitate toward this exploration-heavy narrative game. 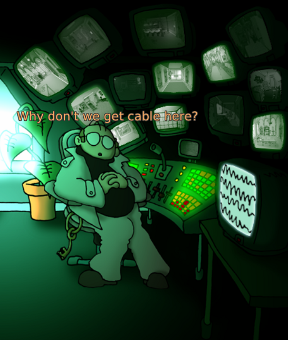 Another bit of trouble comes from touch screen mechanics that feel clunky at times along with instances when the hotspot is just a little off. In addition, solutions rarely happen in simple linear ways. These aren't significant issues when you're enjoying Edna's irreverent comments and witticisms at your every tap; but if you're hearing the same line repeated as you continually try to get it right and are not sure why it's not working as you expect, these issues can add to your frustration. With detailed, interesting artwork and a well-developed cast of characters, though, the story remains compelling enough to drive you past any frustrating spot. In fact, the sense of accomplishment and reward of a new chapter in the plot can be extra satisfying for the extra work in reaching it.

You may have to shrug off some of the mundane conversational points to appreciate the more brilliant spots of humor, but Edna and Harvey's entertaining personalities make a winning formula. Allusions to a Jimmy Stewart film are not lost in the toy rabbit's name or time control ability, either. The deeper theme of individual sanity rises to the surface to round out this story into a meaningful experience. Like her silver screen archetype, Edna's likable character will have you siding with her instantly, compelled to help her in her mission, as you also empathize with her confusion. Here you are, a player stuck in this peculiar place, unsure exactly how you reached this spot or how to get beyond it. When you think about it, that's how a lot of us feel at any moment we reflect on our lives. If only we all had a friend like Harvey to talk us through it.