Dropsy, the greasepaint-wearing clown star of A Jolly Corpse and Tendershoot's surreal surreal indie point-and-click adventure, isn't a bad guy. Sure he's big and kind of... creepy... but really, he just wants one thing, and that's to make the world better, one big hug at a time. Problem is, the world doesn't want much to do with Dropsy since the fire that destroyed his circus five years ago, killing his mother and leaving him struggling to get by in a battered, slapdash shack on the edge of town. Still, Dropsy's a simple guy, and it doesn't take much to make him happy, but he'll need every ounce of that childlike cheerfulness to bring happiness to the residents of town. And maybe, just maybe, Dropsy will uncover the truth of what happened that horrible day five years ago and clear his name, too. Though it struggles with some unintuitive puzzles, Dropsy's eye-catching, toe-tapping style and underlying message of love and acceptance make it a charmer in a big way in an era of cynicism. 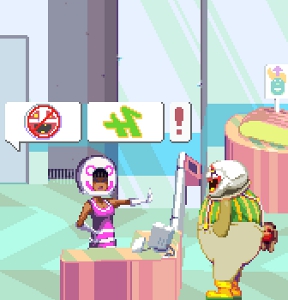 Mousing over the top of the screen will drop down Dropsy's menu, which allows you to open his inventory (his pants, naturally), hug anyone receptive to it, and access the options or save your game. You can also swap to play as Dropsy's pup, who can dig things up, and later other friends, who can fit into small places, for instance. Because Dropsy is "open world", you're not really given any specific instructions most of the time, though you'll usually have an objective for the main story. As day turns to night and vice versa, with the time changing by increments whenever you go through an area transition, the inhabitants of the town and surrounding area go different places, which can open up new actions for Dropsy. While it isn't necessary to make everyone happy to finish the game, which will take most players five hours or more, well, making people happy makes Dropsy happy. And you want to make Dropsy happy, right? You're not some kinda monster, are you?! 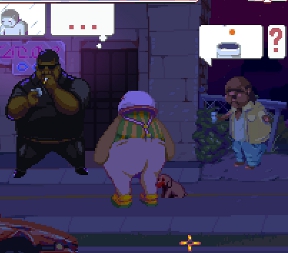 Dropsy's picture-based chit chat works until it doesn't. While some dialogue is fairly obvious, mostly for "go here" or "don't do that", some of the more involved responses can be a puzzle to figure out, and I don't know how much of that is intentional. A lot of the world seems to be presented to us as through Dropsy's eyes, so it makes sense that he can't read the signs, or doesn't always understand what people say to him, but the game's open map and cycling times can make getting stuck frustrating when you're wandering through so many locations trying to figure out what to do next. Moving around the big map can often be slow, and it feels like simply the option to wait for a specific time of day (though you can sleep to pass the time in some places), would have made the game a lot smoother to play. Despite this, there's something very satisfying about playing in and progressing through Dropsy, and a lot of it has to do with the fact that you're not simply solving a bunch of puzzles to get from point A to point B, you're also leaving people a lot happier than when you found them. How many games have making a positive impact an objective? The map is simply massive, and offers a tremendous amount of places to explore, secrets to find, and puzzles to solve. It doesn't hurt that the catchy soundtrack and beautiful pixel artwork make the journey easy on the eyes and the ears, too.

I don't know what it says about me that I spent the majority of the game waiting for the other shoe to drop. Part of it is an anti-clown bias on my part (blame Tim Curry), but I wholly expected something horrible and disgusting and perverse out of Dropsy, which may sort of be the point. We judge people based on appearances all the time, but while Dropsy may look scary and act weird, he is in fact just a sweet, desperately lonely guy who has trouble understanding things but still wants to make everyone around him happy. Though his dreams indicate a troubled mind, someone burdened by what he's been through and an inability to express it, there is no harm whatsoever in Dropsy, just a deep desire to love and be loved, which is a a welcome perspective given how games and other media typically handle anyone with a mental disability. Dropsy is a creative, positive, surprising gem of a game that will appeal both to fans of classic point-and-click adventures, and anyone looking for a hero you can genuinely root for. It's beautifully put together, endearing and earnest, and optimistic in all the right ways without being overbearing. Give it a look... and think twice before you judge someone next time.

I picked this up during the weekend and am enjoying it greatly.

One thing that really stands out is the size of Dropsy's home island. There's a lot of different places to see and explore, and you'll wonder what lies behind the various gates and fences that obstruct you early in the game (but will later be able to pass). The world map helps too, as it's very easy to miss side roads if you're not actively searching for them because the map says they exist. You're given a rather large area to roam from the get-go, which gives you a sense of freedom even though the game has a relatively strict progression.

@Corona: It's soft tissue swelling from fluid accumulation, though "dropsy" is kind of an old-fashioned term, I think (instead of "edema"). The name fits the character design and the unsettling/sticky-sweet vibe I'm getting from the game, imo! Kind of like those bright orange circus peanut marshmallow-ish candies.

Thanks for the review, I was hoping to find more about this after seeing the trailers on Steam. Apparently it's all based off a Something Awful forum thread, where the creator made a short comic based off of asking members what should happen next to this character. Searching for dropsy comic should pop up the final result of that (warning: 2 or 3 pages have flashing gifs and embedded music).

Wow. I remember seeing that comic, but I didn't remember about it until just now.

Having gotten further, the game has a couple of unfortunate bugs. At least one sidequest simply can't be completed as of now because the items won't appear in your inventory. I've also found a few visual glitches that stem from the game not keeping close track of which companions are or aren't with you, though they don't stop you from playing the game.