From the very first time 58Works placed us in front of a door and said, "Go ahead, go on through... if you can figure out how," we were charmed. Straightening our shoulders, grinning widely, we sauntered over to it and it opened. The next one wasn't as simple as that: a key was to be found before any door was to be got past. After that, the machinations involved in door opening continued to evolve. "Alright," we thought, "so we're playing games here, are we?" But from that moment on, the fixation was irrevocably set. Which is why we're so happy to see DOOORS 4, a surprisingly inventive endless escape escape game available to play on your iOS or Android mobile device. As usual in these matters, your goal in DOOORS 4 boils down to finding what needs doing to unlock and exit the door. This can mean a lot of things, though—tapping to move obstacles or using helpful tools, swiping to push things out of the way or operating a dial, tilting and shaking your device for... well, various reasons in puzzle purposes. 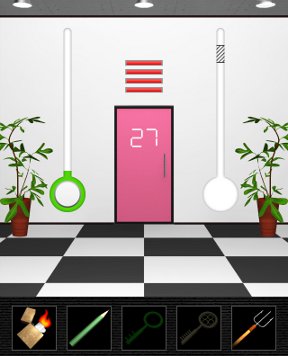 Variety is the key descriptor here. You'll never know what you'll get from one level to the next in DOOORS 4, even if you have some idea after playing the others in the series. It begins with 40 levels, with more anticipated in a later update, and each is so different from the next, what is simple may be challenging just because you're not sure which of the many methods for solving is needed next. Also to be expected from 58Works, the design is clean and engaging, with a very responsive and intuitive user interface. Yet even more so than its predecessors, DOOORS 4 is apt to bring frustration. The wide assortment of puzzle types means you can be sailing right along, tapping your toes and humming to yourself, "Easy peasy!" when suddenly you hit a wall. Interspersed between levels replete with straight-forward logic are some that are coyly abstruse.

Finding the answer almost always involves experimentation, but there are a few times you'll go past educated inference into baffled guesswork. Yet those moments actually keep this game exciting and fresh, something that's sure to catch the attention of those around you—either because they're baffled at why you keep shaking your device this way and that or because you've grabbed them by the arm and pleaded, "What would you do here to solve this?" Since the release of DOOORS, there have been many games of this type to come on the scene, such as 40x Escape and 100 Doors 2013. But in this sub-genre 58Works remains above and beyond the rest, providing a tactile, dynamic experience rather than a static, solely mental one. It may not be what you're used to doing when playing a puzzle game yet, by taking full advantage of your mobile device's unique features, DOOORS 4 will immerse you in a game beyond the typical, always keeping you on your toes with new ways to have fun.

From left to right, the arrows should point...
EAST, WEST, NORTH, NORTHEAST

From the starting point, the yellow square in the center, swipe...

From the starting position (a heart), tap each button...

The solution to this puzzle changes each time you play it.

From left to right, the arrows should point...
EAST, SOUTHWEST, WEST, NORTH

Having trouble with level 35.... Anyone out there have the solution?

Look under the cushions on the left side of the scene and check out the 3x3 grid of swirly patterns. Notice the two that are different?

On the wall behind the couch is a 3x3 grid of buttons.... Check off the two that correspond to the different swirls.

Well that seems way simpler than what I was making it out to be. Now stuck again on 37 lol

Level 21 has me stumped. Hint, anyone?

It's the one with the blue door bearing the d-shaped design and the "2" surrounded by arrows pointing outwards. Nothing I try has any effect!

I thought I'd tried swiping with two fingers. Go figure.

Tilt up to get rid of the wooden barrier. And ignore the 7:00 clock; the others are what you need.

From left to right, the arrows should point...
EAST, WEST, NORTH, NORTHEAST

From the starting point, the yellow square in the center, swipe...

From the starting position (a heart), tap each button...

The solution to this puzzle changes each time you play it.

From left to right, the arrows should point...
EAST, SOUTHWEST, WEST, NORTH

Another good one and hope for more levels.