If you like your point-and-click adventure games with a lot of campy horror and an old-school vibe, Arif Games' Dark Fear, available on iOS and Android, just coyly dropped its handkerchief at your feet and is pretending not to notice. You wake up, confused and alone, in a strange locked shed with an unsettling portrait on the wall. Venturing outside, you find yourself lost in a dark and dangerous valley filled with monstrous creatures and black magic. Solve puzzles, help the locals, and fight a shrieking horror or two to find out who you are and what happened in this clever and engaging adventure that will appeal to fans of classic horror. 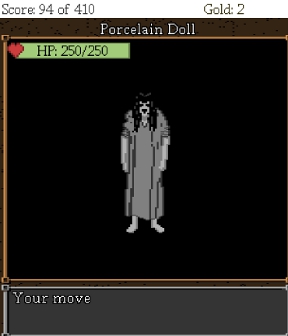 To play the game, all you have to do is tap on things to interact with them. Items can be used directly from your inventory, or combined with one another, to help get past obstacles, though you may want to keep a pen and paper on hand to jot down any potential puzzle or code clues since the game won't do it for you. While most of your game is played in traditional point-and-click-y fashion, give or take the occasional break for the tormented soul of a child to shriek in your face, Dark Fear also features turn-based combat. Choose whether to attack, flee, or defend foes (don't worry, there are no random battles), and keep an eye on your health, or save often, at the very least. Attacking is simply done by tapping the screen when the moving slider is within the green area on the bar for maximum damage, and when an enemy is slain, you'll get some sweet, sweet coins. Instead of leveling up, you get stronger by purchasing equipment in the nearby village, which restocks with more powerful stuff periodically. While weapons and health potions can be bought outright, you'll need to hunt down pelts in the forest to help the armorer make you need protective duds. Most of your time is going to be spent exploring, solving problems for the locals in exchange for information to help you figure out what's going on. 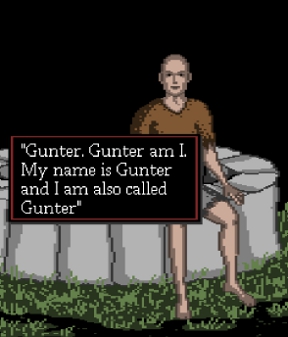 Most of the time, Dark Fear's gameplay is very straightforward. Since areas are small and well designed, it's fairly obvious what's interactive, and puzzle solutions are blessedly logical, so getting stuck is a rarity. The combat mechanics are sort of a mixed bag... there's no grinding, and battles are evenly spaced out, but they're also too simplistic and unvaried. Taking a more puzzle-centric approach to these encounters might have made the game feel stronger and more cohesive. As to whether it's scary, well.... mnnnneeeeyyyyeeeah?... that was a noncomittal whine with a hand waggle, if you couldn't tell. Dark Fear is campy in a very old school way that puts one in mind of a lot of horror movies released in the eighties, which isn't necessarily a bad thing... it just means that this sort of feels what you'd get if you got Wes Craven and Richard Garriott to collaborate, so it's at once very dramatic and creepy, but also a little goofy. More Army of Darkness than Evil Dead, if you take my meaning. There are some very well executed jump scares, and Dark Fear blends macabre classic fantasy vibes with great spooky elements like shadows skittering across the walls to great effect. Despite the subject matter, I found myself playing with a weird little grin on my face the whole time, because Dark Fear is so unabashedly reveling in its ghoulish material that it's infectious. For most players, this is likely going to be the work of several hours or a single evening. The difficulty is light enough thanks to the small areas that the pace is overall fairly brisk, but the end result is a game that doesn't waste any of time. Dark Fear is weird and fun in equal measure, and takes a refreshing and clear sense of joy in its macabre tone and setting.

This is such an ingenious concept that I'm surprised someone else hadn't thought of it first.

Worth it. Love the retro-style and horror RPG elements.

It reminds me of playing the Clock Tower on SNES as a kid and having nightmares. Dark Fear is not as scary but it packs a punch for what it is. If you're interested but prefer your games free, watch a few minutes of a lets play on youtube and see if that doesn't convince you to give it a try :)