The skilled investigator and his peculiar helper, after they breaked the curse in a small town and helped its inhabitants (Cursed Travels. Flame of the Banshee), arrived on their journey to an omnious mausoleum. The cursed mausoleum, of course. Some prince was buried here but apparently, he does not rest in peace (and neither in piece). It's time for another adventure by Ferociter (Casper Van Dommelen) in a dark labyrinth! 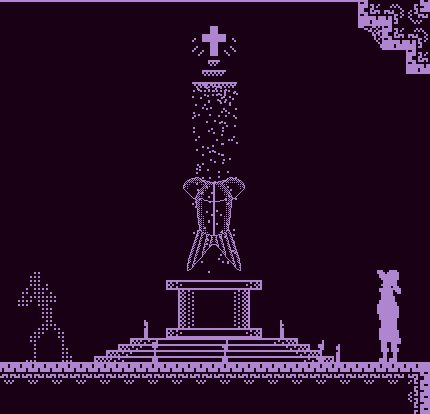 After a short intro, the strong curse starts to take effect and both protagonists fall down to the heart of the labyrinth. Luckily, there is a gate in front of the investigator and he can enter it and explore the chamber behind it. It's important to talk to any ghost/skeleton or other creature he meets; they are eager to tell him important infromation and explain how to move around the place. By the door is a grid map - the same map you find in each room, always exactly in the same state in which you left it in the previous room - and with panels you obtain one by one you can create the path from one room to another. On the map are marked important chambers where you need to solve a puzzle or two, and also find hints to the puzzles. There is more to be discovered in the labyrinth as few rooms are secret - notice, that you can finish the game without finding them.

The Ferociter's game isn't easy but has the right amount of difficulty followed by the deep satisfaction if you solve a puzzle on your own. The game is more puzzler than platformer - it has only one jumping part (not difficult) and a few time puzzles with not too tough timing. Notice, that there is a way how to move up in the labyrinth and you get the information at the right time. Controlled by AD/Cursor keys, Z/K/Up/W to jump, X/L to aim or interact, Down/S to crouch, P pause, M mute.

At the beginning you may feel a bit confused but after you understand the game's style and the rules of moving around the labyrinth, you are rewarded with very clever and intriguing game with a replay value.

The prequel is here: Cursed Travels. Flame of the Banshee

Another Ferociter's labyrinth (outside the series) you find here: Lost in Firefly Forest

2,101 Views
3 Comments
chrpa— Jayisgames needs your help to continue providing quality content. Click for details Hi! Weekday Escape and Weekday Puzzle are here! As every second week, we've got a new tomoLaSiDo with rather tough puzzles followed by a short point'n'click game...  ...

1,213 Views
0 Comments
chrpa— Jayisgames needs your help to continue providing quality content. Click for details Welcome to Mobile Monday! We start with Nicolet's game and again you end up in a small house and can't leave until you help its inhabitants. Then...  ...