"Greeeeeeetings, boils and ghouls! It's your old pal, Creepo here, everyone's favorite master of scare-i-monies! Today we're creature-featuring a new point-and-click adventure from Carmel Games. Or should we call it a pain-and-crypt deadventure? Well, when patrons start disappearing from a local food court, just as a killer new burger stand gets hideously popular, a competitor's employee decides that he's hungry for answers. But what he unearths may put him off red meat for good! It's Creepo's Tales: Chopping Mall, and trust me, kiddies... it's a meal to die for!" 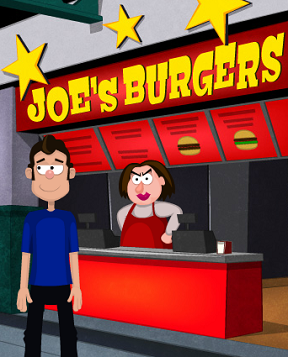 Thank you, Creepo. Gameplay is standard for the genre: click around to interact and pick up items, clicking on something once it's in your inventory to use it or to combine it with another item. The map in the lower right will guide you to various locations around town. Carmel Games has steadily improved with each of their adventure game releases, and Creepo's Tales: Chopping Mall continues the positive trend. The story may be horror, but the cartoon art and quality voice-acting keeps things comedic. The puzzles have generally sensible solutions, and even the few that don't should pose no problem to anyone versed in adventure game logic... though just once, it'd be nice to, when faced with an antagonistic hungry person blocking your path, get them to move through reasoned conversation, rather than tricking them into eating something gross. Creepo's Tales: Chopping Mall could stand to be a little longer, and the twists of the story are fairly predictable, but classic adventure game fans should find it an entertaining way to fill a lunch break... because man, they probably won't feel like eating afterwards.

Creepo's Tales: Chopping Mall Walkthrough
(Note: I recommend that you click on things you're not told to, just for the flavor text. It can often be humorous.)

Creepo's Tales: Chopping Mall Walkthrough
(Note: I recommend that you click on things you're not told to, just for the flavor text. It can often be humorous.)

Doublemeat Palace anyone??? With a side of Soylent Green...

Humourous little game. Always been a fan of the lighter side of point-and-click.

Might add that the "Comments or Questions about Creepo's Tales: Chopping Mall?" link just links back to the game itself.

Tales from the Crypt anyone?

11,887 Views
5 Comments
chrpa— Jayisgames needs your help to continue providing quality content. Click for details Masa's games have a simple and clean graphics, and perfectly logic puzzles. The hints are absolutely clear and the only thing which you need is your brain and...  ...