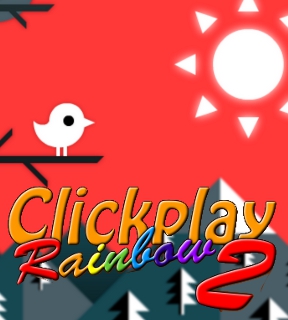 I know that face. That's the face of someone who hasn't had their frown turned upside down in a while by another NinjaDoodle smorgasbord of puzzles and mini-games. Well, prepare for your day to get a little more colourful with ClickPLAY Rainbow 2, the sequel to the first game, and another fine showcase of hairballs, monsters, robots, and monkeys! As before, the goal is to figure out how to uncover the black and white play button hidden on each screen, and then click it. Easy, right?

There are twenty-four levels to solve this time around, and if you're expecting logical brainiac puzzles, well... don't. ClickPLAY Rainbow 2 showcases the same whimsical design and delightfully off-kilter problems to contend with. While you can generally figure out what you need to do by just experimenting, and the difficulty level is fairly low, a few of the puzzles feel like they're more finicky than they need to be because of the way they're implemented. This one is, uh, maybe a little grosser than its predecessor, however, with barfing cats, snot, and eye stitches all making an appearance, in addition to some cartoon violence, which is why this installment earned a yellow rating. (The more you know!) If you can handle a bit of squick and don't mind busting a few chops, however, ClickPLAY Rainbow 2 is another wild and weird way to inject a little silliness into your day.

My main problem with these games is that clicks are a very poor metric for how well you did. Some levels take a ton of clicks to do at all, and messing up on them can have a huge click costs. Others won't take clicks no matter how poorly you do, When one level may require 1 click and another costs 100, they are so heavily weighted in terms of your final score it is ridiculous.

I highly recommended for level Searchlight to

play with a mouse rather than a touchpad

Also the Click play Rainbow's walk through (not JIG's) is incorrect for level paper pusher.

As fun as these games are, they're incredibly unfriendly to us laptop users. :s

The searchlight level is nearly impossible to play with a trackpad.

I had a heck of a time with that Searchlight level using an actual mouse. I nearly quit at that point, in fact. I can only imagine trying it with a trackpad. It'd probably be like trying to play Operation in an offroading Jeep during a fierce storm.

For some reasons, the searchlight level did not frustrate me as much as the sushi one (I'm also using a trackpad)

I've played so many games on trackpads over the years that I found it fine. I got Indigo first time round with well over 400 clicks, then got down to 285 on my second go which got me Red.

I liked the Factory Balls reference, but it was otherwise a mediocre timewaster.

Enjoying the game, as ever with these, but reached to level 19, and just got a black screen. Nothing to click, no response.

Not sure if paper pusher is bugged or I am just stupid.

The third sheet was just black for me and It didn't seem to move around.

Same as motty, level 19 is just a black screen :( And I also tried twice, same.

The same thing that happened at level 19 for motty and joulsauron happened to me as well. In fact, Flash stopped working all together. I'm using Chrome on Mac OS X 10.6.8.