Cadenza: The Kiss of Death

Your life seems like it's about as perfect as it can get. You're engaged to a handsome jazz pianist in New Orleans, just putting the final touches on your wedding plans. But when your sweetie's former band mates start turning up dead, and mysterious smoking men are slinking about, it's time to take action before it's too late. You play as Ella in Mad Head Games hidden-object adventure Cadenza: The Kiss of Death. With nothing but a black lipstick stain as your lead, you're going to have to use all your skills, and maybe even learn some new ones (unless picking locks and diffusing bombs are already part of your skill set. Who are you, MacGyver?), as you do everything you can do to save your future husband's life. 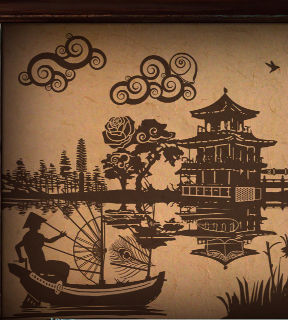 Before you point-and-click yourself around beautiful Louisiana, you can choose a pre-set difficulty level, or customize your own. Everything about this game feels extremely polished. The majority of the voice acting is excellent, and the jazzy soundtrack is outstanding. There's always something so alluring yet at the same time a little bit terrifying about the jazz scene in New Orleans--as depicted in stories, at least--and the game does a wonderful job of projecting that feeling onto you as you play. It's all delicious drinks and snazzy clubs until you end up with a gun in your face. The story here moves quickly, and the puzzles and hidden-object scenes flow nearly seamlessly with the narrative. The artwork is lovely and atmospheric, with clear aesthetic differences between different parts of the city, and I appreciated details such as silhouettes showing behind lit windows.

The Kiss of Death definitely keeps to the high standard the previous game set. The puzzles, while not always difficult, are often innovative and clever, and the hidden object scenes have enough variety to not seem repetitive. There's also golden tickets hidden away in most scenes. These can be quite tricky to spot and I was often too caught up in the story to remember to look for them. There is an icon in the bottom right letting you know if you've found a ticket for a particular scene or not. There's also morphing objects which only appear in hidden object scenes. Packed with action and a pleasure to look at and listen too, Cadenza: Kiss of Death is one of the most engaging hidden-object adventures I've played recently.