There is a house in New Orleans, they call it... The Jazz Pepper Club! Home to one of the best jazz bands to come out of The Big Easy, owned by your dad. It's Mardi Gras time and you're coming down for a visit. Only, the club is eerily quiet on what is supposed to be a busy night. As you make your way inside, you realise that everybody there is petrified in a sort of trance, their white eyes turned towards the stage. All signs quickly point to Frankie, a local sax-playing legend, who also happens to be dead. He used to play with the Jazz Peppers until he died and was replaced by your dad. Is he a zombie coming back for revenge? Find out in Cadenza: Music, Betrayal and Death, quite probably the finest hidden-object adventure by Mad Head Games to date. 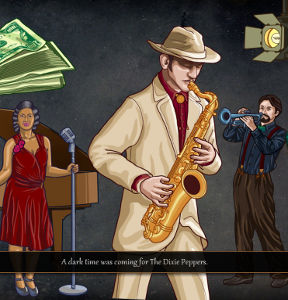 If there ever was a casual game you can characterise as groundbreaking without overstating you case, it's this one. Every single aspect, from the story to the gameplay and the soundtrack, has been designed with utmost care and the desire to move the genre forwards into wonderful new territory. There is never a dull moment in this action-packed adventure: even the most mundane tasks have been transformed into puzzles, providing a deeper sense of immersion. Everything you do serves an immediate purpose, each hidden-object scene is seamlessly incorporated into the gameplay and strives to minimise the busywork. If the storyline was more complicated, finding mini-games at every turn could have been a tiring experience, but the history of the Jazz Peppers is the perfect backdrop to the gameplay. Simple but poignant, it's revealed through the nostalgia-filled memories of the band's former glory, and excellent voice acting certainly does it justice. New Orleans proves a lovely setting, depicted in colourful scenes, with its ever-present hints of creole magic and Mardi Gras merriment. The combination of its vintage charm and the smooth, elegant jazz makes for a stylish, cozy, inviting environment.

In its gentle but wonderfully memorable way, Cadenza: Music, Betrayal and Death has set a new standard for hidden-object adventures. It is an instant classic and a beautiful product of passion and imagination. Possibly the only thing standing between this game and casual gaming perfection is its length. A simple story means fewer scenes, so you'll be able to finish it in less than four hours. But it's obvious from the first few minutes of the demo that Cadenza is well worth playing, and then playing again, each time humming the enchanting opening theme.

Cadenza: Music, Betrayal and Death is currently only available in a Collector's Edition, which includes a bonus level, concept art, wallpapers and more. Remember that Big Fish Game Club Members pay only $13.99 for Collector's Editions (or 2 club credits), and collector's editions count 3 card punches of 6 total needed for a free game.

There is a Mac version available for download at the same site as the PC version, but several Mac users, including me, are unable to open the demo. It crashes immediately. 2 lucky users running OS 10.6.8 were able to play. One did the demo, one played into the game but ran into another issue. You may be another lucky one, but please report if you were not. That will help get it fixed. Thanks!

This game is fantastic!! I downloaded the Mac version a few days ago and haven't been disappointed. The has not crashed and it moves very well. Perhaps there was a Mac update?

There is a work around for the Mac crashing issue. If you install your BFG demos / Games in a sub folder in Applications, try installing the Cadenza demo at the root level of Applications. You have to change the install location in the GM to Applications by going to Options / Downloads. Be aware -- if you hit play and it looks like the game still crashed, look in your dock. I found the game icon was running there and the game would play by clicking it.

The work around is for the CE version. The crashing issue has been fixed in the SE version.

I totally agree with everything you say.. wow. I remember i came across the review for this game on another website http://www.doublegames.com/cadenza-music-betrayal-and-death.html And loved it too, but man, yours is even better. I even consider playing this adventure haha. If people talk good about it, so why not?

Thank you! If you haven't played a lot of hiden-object adventures, or even if you aren't a fan of the genre in general, this one is definitely a great choice.