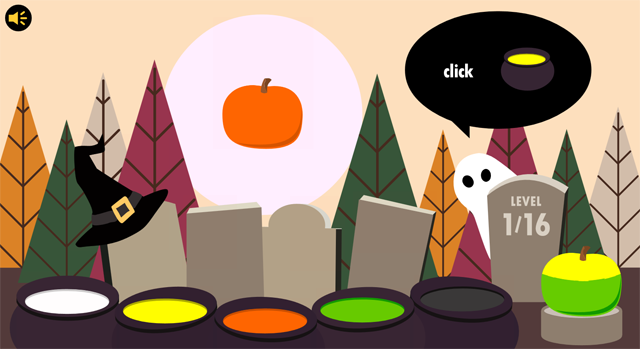 Boo! A bit late, huh? Well, Bart Bonte isn't late, it's me. Brand new BB's game was released a week before Halloween but sometimes things are not going as planned...oh well. You can put a memo somewhere and leave the game to the next Halloween, but it would be a pity as this is awesome game, based on unique and original Factory Balls series.

You have to paint sixteen pumpkins (instead of balls), each to match the model pumpkin lying on little pedestal on the right. Five bowls of paint, eyepatches, witch's hat and bat shaped mask are your tools. The first level is a tutorial, friendly ghost explains how to paint your pumpkins step by step. Notice, that order is important and you have to plan few steps ahead to paint the pumpkins right, but they can bear as many layers as you want, so not a problem to start again if you make a mistake.

It's a fantastic and amusing game, happy playing!

This seemed quite a bit easier than some of Bonte's other Factory games, but it was still lots of fun.