Ah, the joys of minimalism. Who needs flashy graphics and sounds, anyway? When a game's as unembellished as Blue Box by Hamster On Coke Games, it becomes downright zen, and the soothing puzzle challenge becomes as meditative as it is fun. This game (which is still in an early build and will likely soon expand, by the way) has you playing as a little blue square, bouncing rhythmically and energetically across a white expanse adorned with blocks you have to eliminate. Use the [arrow] or [A] and [D] keys to move left and right. One bounce on a block shrinks it and the second bounce makes it grow, so you have to plot out your course carefully so you don't wind up stranded out on a limb, having bounced away your only path back to safety. Later levels involve launch-pads that shoot you up to higher levels, teleporters, and other modifiers that keep everything fresh for all twenty-three levels of smooth puzzling fun. 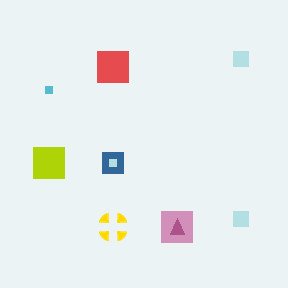 Blue Box is good for what it is, and we mean that in the best possible way. It doesn't stretch its boundaries or push puzzle gaming into bold new territory, it's just really good at what it does. The music is a glorious piece of ambient easy listening, and the game is pleasingly hands-off. It doesn't bury you in extensive tutorials or explain every new block type, allowing you to discover, plot and plan at your own pace. A big part of the fun is finding some new block type and trying to wrap your brain around the new possibilities it grants you. The promise of future sequels or updates makes us forgive the game's brevity. Blue Box may be a demo for things to come, but if the demo's this fun then later products should be downright addictive. Could a mobile version be on the way? Maybe? Please? Well, until we get more, we'll be sure to keep bouncing our little Blue Box through each level of puzzling fun, and a bigger, more fleshed out version is something the developer is toying with, so make sure you let them know what you think!

Either I don't understand the rules or it is faulty. I keep falling though the blocks, the end and the portals.

It's very similar to the Gameboy game Pop Up (Cool Ball), which Ketchapp also cloned.

And this one seems to have less gameplay elements than the two mentioned above.

This is a great game - very simple concept. I like the elements added that make it a little more challenging, but I think there's a lot more could be done there. Would also be interesting to design the puzzles so that you could use a switch to rotate the screen 90 degrees either way, and design more complex puzzles around that.

Awesome web toy. Would be better if we could drag and drop the award picture to our desktops. 5/5 stars, none the less. :).

You can jump on a block twice to return it to original size, this make this game much much easier as you can just pretend that you have not step on it.

Wonder how level #21 can be beaten - because it seems pretty much impossible, unless there's something I don't know about...

So far it's been a good one.

Level 13 took forever but I still don't fully understand the mechanic of the dark blue box.

Easy: with it you can jump on a box twice and make it smaller 2 times instead of returning it to previous condition. Example: (number is the box size)

I am still working on Level 13???? I would like a hint if someone has one on how to get it. THANKS

You can go back to the start point

I haven't played Pop Up, but I found this a cool, deceptively simple game. The levels are so short, they weren't annoying to replay while figuring out mechanisms like the dark blue square. I wouldn't even know how to begin to write a walkthrough, though!

Yeah, but the box just falls through when it goes to 0 instead of bouncing up.

Is anybody else having a bug where the game just freezes as soon as it loads? For me it keeps freezing on either a small blue square in the middle of the screen or what I think is the level select screen.

Yeah Level 13 would be quite easy if the little blue lined box would bounce back up after destroying the last level of the box but on my version it always loses the blue lining then falls straight down. I have no idea how to get to the end. I had the beginning part where you go back to the start figured out.

systematically trying the few possible starting moves one after the other. There are only a couple of options at each step, so I just kept ruling out the ones that cornered me.