20 Days left. One could look at it as having "only" 20 days left, or, perhaps "still" 20 days left. Right now, 14-year-old Bridget, lying in her bunk at summer camp, is leaning towards the latter. She's been told that this is a summer for which she will have nostalgia for the rest of her life. But she's not feeling it. But there's a world of dreams she goes to whenever she falls asleep. It's a world filled with bird people. Sometimes those bird-people need a deputy. Or a pirate ship captain. Or a hockey player. Those bird people need a lot of things. Mostly occupations that Bridget's feeling much more qualified for than camp life, but maybe both will let her learn on the job. BIRDLAND is a twine interactive-fiction adventure game written by Brendan Patrick Hennessy and illustrated by Izzy Marbella, where the life and dreams of a teenage girl fly round in circles together. 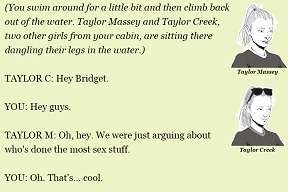 Those who have played twine games before will find the mechanics familiar: You will be given descriptions of scenarios, and make choices by clicking on the bolded text. The choices you make, especially in your dreams, will affect personal stats, and, in turn, affect your waking mood. If certain stats are not high enough, options will not be available to you and, instead, will be crossed out (this should be familiar to players of Depression Quest in particular, though, of course, this is a much lighter sort of work), giving the game a bit of replay value when you make different choices. I've always had a certain fondness for the "fully realized fantasy world as reflection for main characters personal struggles" trope that so often shows up in young-adult media, and BIRDLAND hits all the right notes. The metaphor may not be as integrated as it is in Buffy, but its blatancy doesn't matter when the prose is so well-written. The oddities of BIRDLAND are palpable, but even with 50% of the time spend in dream-bird-land, it's a game that hits some nice notes of realism. The dialogue of the human characters really get the familiar ambiguities of teenage life down: neither monsters nor innocents, neither too clever nor too foolish, and while certainly a bit uncomfortable in their own skin, worthy of both sympathy and empathy. Of course, it also helps to have a land of surreal bird-people scenarios to play back up (as Hatoful Boyfriend demonstrated so well). In short, BIRDLAND is undeniably weird. But it's the engaging, kind of weird that should and will be eagerly sought out.

Oh my god, that was amazing. The writing really is incredible, hitting the perfect emotional and humorous notes. I'm a little behind on my interactive fiction, but that was easily one of the best I've ever played.

Thanks for this review!

I would like to add that Birdland is one of 53 free, short, independently created games entered into the 21st Annual Interactive Fiction Competition, whose website currently hosts this work. Voting's open to the public through November 15! More information at http://ifcomp.org

"Do not mosey any more paces forward, sheriff!"

I'm quite enjoying this.

Not yet finished but have to agree that this interactive fiction is incredible. Nice clear interface and throughly engaging. Definite 5 stars from me.

-Learned about wilderness survival.
-Played sports and made crafts.
-Made a best friend/maybe more.

-Saved the human race from conquest by alien bird people and their demonic possession.

Are Twine games that explore LGTBQ themes through fantasy/horror stories about summer camps a thing now?

They're all Bird Person!

The location of the next invasion will be in Barbados if I looked the coordinates up right.

Seconding the other comments about this being fantastic.

Does this author have any other work/projects? I really liked the style. It made me want to go back to summer camp again and be a kid :)

He has made a few other text games, one of them being a "prequel" to BIRDLAND (Bell Park, Youth Detective). They are stored in IFDB (The Interactive Fiction Database), under the name "Brendan Patrick Hennessy".