As the Wikipedias tell us, major depressive disorder is a mental disorder characterized by a pervasive and persistent low mood that is accompanied by low self-esteem and by a loss of interest or pleasure in normally enjoyable activities. It is believed to currently affect approximately 298 million people as of 2010, which is 4.3% of the global population. As you probably know, a famous entertainer who just about everybody wished well has recently committed suicide. Many who've never experienced the disorder are trying to understand why, and just as many who live with it try to explain but find it difficult to elucidate beyond a list of symptoms and desperate urging for those who suffer, to get help, even though they know from experience that it's not that simple, and the stories they share may only trigger more pain. Into this maelstrom comes the wide release of Depression Quest on Steam, or play it online in your browser. It's a twine interactive fiction game where you play as someone living with depression, developed by Zoe Quinn, Patrick Lindsey and Isaac Schankler, and its hard to tell if its come at exactly the right or exactly the wrong time. Either way, though, it's well worth your time.

Players should be warned that the narrative deals frankly with depictions of people in painful mental states. Those with conditions that might be triggered should take caution. Anyone with thoughts of suicide or self-harm or feel that they may be at risk should seek help immediately: You Are Not Alone. 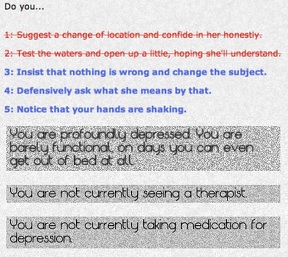 Depression Quest is played like most Twine games: you are presented with a scenario that your character, a mid-20s human being with a significant other, a job, a family, a project you wish you could spend more time on, and depression. You must choose what to do based on the options given, and all you have to do is click on the bolded text that represents your choice. In this particular game, options will open and close depending on previous decisions, though the unavailable options are displayed (crossed-out) to show the effects of your condition. Another interesting wrinkle are the occasional visual and sound-effects used to simulate some of the physical symptoms, though writing is definitely the focus. Depending on your choices, five different epilogues can be unlocked.

Analysis: Depression Quest has had a tumultuous journey to Steam since its initial release in early 2013. A full accounting of the reports of harassment its creator received related to it is beyond the scope of this review, but suffice to say, it seems to have inspired a lot of internet-anger simply by its very existence. So, like every other game ever for which this has been the case (See also: Gone Home, Proteus et al.) and, more importantly, like every other pay-what-you-want game for which this has been the case, it just made me want to check it out more.

And I'm glad I did! Depression Quest takes a topic that many feel confusion, pain, or shame about, and arranges it to form a personal narrative that feels natural and cohesive. The fact that it is tackling a subject not often explored in media in general, let alone games, would make it intriguing, but that it's prose avoids the sensationalism, sentimentality and self-important preachiness pushes it beyond the level of A Very Special Choose-Your-Own-Adventure, and into a piece with real emotional heft. Certainly it has a bit of an opinion about some choices being better than others, which runs a little contrary to the idea that depression isn't something one can "choose" to get better from, but certainly one can understand the desire to avoid pushing someone in the wrong direction. Maybe it's just the Forer Effect (and it probably is!), but I think a lot of people will be able to empathize with the situations presented and feel a connection. But if you don't... well, that's the conundrum, isn't it? 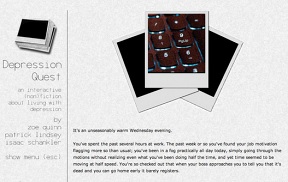 Depression Quest's attempts at accessibility through vagueness do sometimes feel incomplete, and thus awkward. This is a quest, not a simulation, but how personal the story is, varies. You are not an Ageless-Faceless-Gender-Neutral-Culturally-Ambiguous-Adventure-Person, as Dalboz of Gurth would say; just half of one. You have a defined age, but no gender. You have a socioeconomic status, but no race. You have named family, friends and a lover, but there no history there, meaning NPCs often come off as paper-dolls with a few attributes attached. With the lover being female, that limits your sexuality, and so forth. Depression is a personal condition that's difficult to extract from the contexts of the person afflicted, making this concern especially vital, whether in getting other people to understand how it affects someone personally or seeing a need for help within a person's own life. To their credit, the authors recognize this, as the intro text admits that even while trying to depict as wide a range of experiences as possible, that there are especially those whose poverty would remove even some of the few options the PC has available to them. Of course, in a perfect world, we would have already had an Alter Ego version of this written by a team of health professionals, where you could input your details at the start, and the authors could explore the condition from their own personal perspectives without being constrained by the ambitions of the attempt to speak to all people at once. Then again, it's not like there was a horde of developers racing out to tackle the subject, and if there are a few stumbles, it is all balanced by the new ground being trod.

For all these quibbles about what is and isn't "problematic" about Depression Quest, I'm glad that it's here, and that it's free, and that it is offering such a positive experience to so many. It may not be perfect, but I can see it being valuable. And considering how much happiness and insight games have brought all of us over the years, we would be remiss in not giving the benefit of the doubt that Depression Quest might help people on this whirling orb we call Earth understand each other a bit more, maaan.

Note: Depression Quest is available for free, but donations are accepted on the game's website. A portion of from the game will be donated to the National Suicide Prevention Lifeline and the International Foundation for Research and Education on Depression.

It's an alright game, but (1) depression is such a personal experience and I think the game you posted a while ago (need to find it again, it was really great) was the one that spoke to me the most about the sensation of depressive episodes (2) I know the game is trying to encourage people with depression to get help, but it seemed almost too easy going to a therapist and taking meds. Handling schedules and appointments can be so hard in a depressive fog, even when you're trying to make it easier on yourself on the long run. They could've put in some things like handling quirks of meds (bad side effects, not taking it with enough food and upsetting your stomach, drinking less or not at all)or the terrible things people can say to you about depression.

Woah!!! I think we got the most philosophical game on internet. Seriously, Depression is something that destruct one's inside. They should put a "Philosophic" tag.

I hope nobody at JIG was involved in the Zoe Quinn conspiracy... ;)

That being said, the game is meh. And once again, like all "games" of this genre, falls prey to the eternal question of if it is even a "game", by definition.

I had my doubts about the writing initially, but it was good enough that it made me recall and project how I felt when I was severely depressed.

I feel like there was a little too much anxiety thrown in the mix, which compounded issues, but that's more likely due to individual differences (I experienced both separately)

I think that the game might have been better if not all choices were available in the first playthrough, therefore allowing people to better experience what it's like when you 'choose' to not go to work or call the therapist, etc.

All that said, I'm glad that people are starting to address mental health issues (properly) in games.

Could it have been Elude? That one is pretty good.

When I played it, not all the choices were available. I think it depended on the choices I had made and the mood they had put my character into.

Sorry, you're right... I meant that they could have made even fewer choices available.

I think that people who have little or no experience with depression would choose a help-seeking route in the first playthrough because it seems so obvious but I think that it would have made a greater impact and been a better simulator if at the end of it, the player feels upset about not being able to get help for the character even though they wanted to.

For example, in the depression stages of Elude, some controls are taken away from you and you are forced to sink further. Later though, you do have a choice.

I know it's not necessarily fair to compare the two games and people might not agree, but it's just a thought.