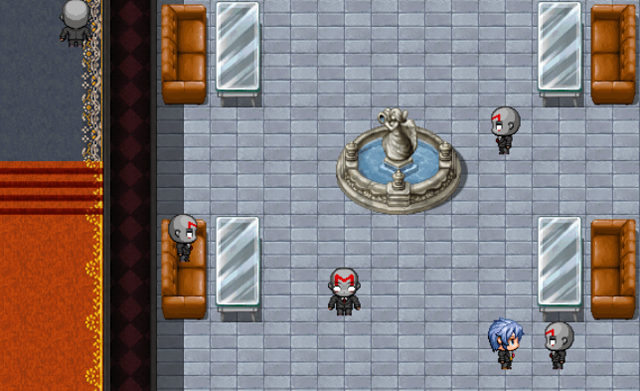 You are exactly what Chaos City needs but does not deserve - not a hero, but a villain! A few months ago, we released a review for a prototype of a new series that author Vasantj was developing, Anti-Villain. After being dumped by his girlfriend upon acceptance into the prestigious Hero Institute, the main (anti-) hero Rory sets off on his very own quest to become a Supervillain. Rory soon learns, though, that underhanded tricks abound in their ranks. In Anti-Villian 1, you are assigned missions you must complete in exchange for glorious fame...or at least, a bit of pocket money. This episode takes on more of an RPG feel with a lobby base where all you and your fellow baddies can hang out. In addition to the mission board where you can choose to accept assignments, there is a ring where you can bet your in-game money on one of two fighters, a hospital where you can pay for healing (what? You didn't expect it to be free, did you?), and a store offering upgrades to Rory's skills and abilities - if you can afford them, that is. You'll need to throw everything you got at times, fighting through hoards of - you guessed it - baddies who think they can cut you loose and make off with all the loot and credit themselves!

I enjoyed how this first (true) episode brought more of a full-rounded feeling of the RPG genre to the game, as well as a healthy dose of slightly dark and pessimistic humor. I do think it would be interesting, however, if our villainous friends encountered heroes more often, rather than mostly just squabbling with other villains. One thing to be forewarned of is that the saving is a bit weird and there is (as of yet) no way to escape a mission. Right before beginning a mission, the game will ask you to save, but then upon loading that file you will have no choice but to carry it through. This potentially creates the unpleasant dilemma of becoming trapped in there, trying to complete a mission without the possibility to purchase upgrades or consumable items, or having to restart the entire game over. It is thus beneficial to move over to a new save file every time you are doing a new mission, allowing you to resolve this issue. In terms of controls, it is much the same as the previous game. You have your choice of keyboard or mouse controls to navigate through a sometimes clunky interface choosing things like using consumable items during or between battles. Different party members will have different choices of attacks, consuming special energy when used. You'll find out more as you explore, so go ahead and give it your worst shot!