Acclaimed bitwrangler zillix (exposure, denudation, endeavor) emerges from the pixel mines once again for Ludum Dare's Ancient Technology game jam, and are we ever glad he did! Someone needs to get the lights on around here, and in his new anachroma that means doing it one color at a time. In the classic style of metroidvania games you'll be toodling around an increasingly sophisticated map, but your accessible range will be limited at first and increase as you discover new abilities and game mechanisms that bring on new game mechanics and freedom. Right from the start, a new mechanic helps you survive long falls — and encourages exploration — with what we like to think of as Retroactive Fall Avoidance: fall beyond a certain distance and you'll crash hard, but the game will then courteously rewind you to the last ledge you were on minus anything you may have acquired during the fall. This neatly enables you to repeat the process several more times a la Groundhog Day until you find a better approach, but we like the encouragement to explore that anachroma provides along with that charitable approach. 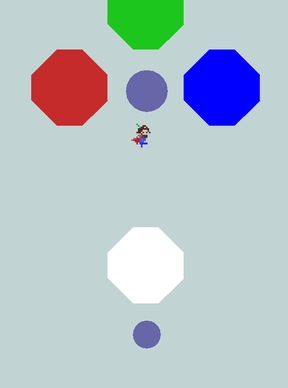 As the captain of your vessel you'll blip around saving the day with the [arrow] keys, or [WASD]. This is fairly straightforward at first, at least until you begin to acquire your various new abilities! We'll strive to avoid spoiling the discoveries for you, but let's just say you'll have a newfound appreciation for octagons! Swash those buckles as you bound around an area on your ship that's fairly limited until you gain those snazzy new abilities enabling you to master ever more of the map. New abilities appear as stars, while you'll occasionally encounter triangles that allow you to restore your missing chromatics and get things fully operational again. Anachroma comes up to zillix' usual top-notch standard and demonstrates quite a lot of innovation, especially for an entry in a gaming competition that some developers would consider so brief that it's not worth putting a lot of ingenuity into — and that emphasis on quality and high standards is exactly what separates the developers of renown from the rest of the pack. Even the level design took some doing, taking into account the special abilities you'll encounter later on. We'd love to see anachroma expanded at some point from a brief proof-of-concept into something more substantial because it's the kind of enjoyable play environment indie games should be, and we think you'll agree.

I'm stuck at the observatory. The arrow there (for me) is to the right. How do I get out?

If i'm not wrong, there should have been a star in that room.

This star gives you an additional ability:

To rotate the world back to the "original" direction by pressing the "down" key on your keyboard.

Oh yes, what you said.

There are so many glitches that can happen if you hit a corner just right.

I glitched my way to the outside of the solar station, but couldn't find a way to land on the sun alive. Then I got myself stranded on the balcony with no way to escape by rotation.

And then I refreshed the page and got myself stuck in the wall in the first 10 seconds. I haven't been able to do that again though.

An interesting idea but let down by the implementation. Jumping seems far too glitchy and random, as does the design. And it was over far too quickly. In the end there were only two objectives, the two stars I collected, before it finished. It would have been over much sooner if I had not spent so much time trying things that did not work, retrying jumps and paths.

Very good!!! A very pleasant casual game with an awful lot of depth. Short enough to explore and complete in a single session but deep enough and rewarding enough to give you a satisfying buzz at the end.

Strange, when I try to play the game, I get a dialog box popping up asking whether to open or save a file called index.html

Any suggestions on how to fix this?

I'm getting the same thing. No idea why, though...

I can confirm that Dropbox is serving the game page with a "Content-Disposition: attachment; filename=index.html" header, causing the page to be downloaded rather than displayed. One workaround for Firefox is to use the Open in Browser add-on, which ignores the header and displays the page properly.

Can you explain how to do this? thank you

This is what I used to make it work:

1. Install Open in Browser in Firefox and restart Firefox.
2. Use the "Play anachroma" button from this article. When the frame loads, it should trigger a download prompt. On this prompt you should now have a radio button option to "Open in browser as", and select "Web Page" from the dropdown.
3. Press OK, and index.html should open in the same tab and load the Unity code correctly.

Thanks, that totally worked!

hey i really loved your work. thank you for such a piece of work