Amanda Rose:
The Game of Time

The concept of travelling through time has ignited the imaginations of many, and the resulting tales present with a myriad of possibilities. But more often than not, there's a time machine involved. Amanda Rose: The Game of Time, developed by Renergy, takes the idea of hurtling through a time-space continuum one step further by way of a small stone in an unfolding cube found by our heroine, Amanda, at the site of a plane crash. It's not an easy ride though and after several days of unconsciousness, she awakes to an adventure that will take her through the wild west of America to the amazing lost city of Atlantis. Of course there are multiple hidden objects to be found to help her on her way. 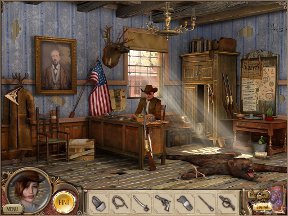 Amanda Rose: The Game of Time takes the hidden object adventure hybrid standard up a notch with gorgeously-detailed scenes, high quality artwork and a high level of puzzle solving to locate items. There are also puzzles to solve aside from the searching, and while intricately detailed to look at, they're not overly challenging. The main goal of the game is to help Amanda Rose locate her missing father, and to do this she undertakes a variety of tasks to help the characters she meets during her journey.

Each scene requires a double level of hidden object seeking. The first level of objects are fairly straightforward to locate, hidden somewhere in each detailed scene. The second level requires a bit more puzzle-solving on your part as these items are hidden within locked chests and safes, or can only be acquired after completing certain tasks. Some items need to be combined in order to progress, which is easily achieved in the inventory and signified by a "plus" symbol next to objects.

Facets of the game that are there to help include a journal that records notes and codes as well as serving to remind you which tasks need to be completed, and a hint meter which is slow to recharge, but helpful in pointing the way. What's nice about the hint meter is that it often doesn't point directly to difficult to locate objects, but really does serve as a hint system. 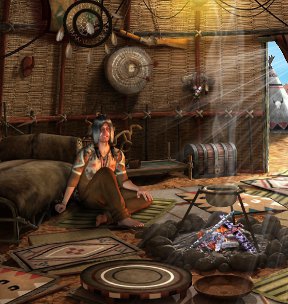 Analysis: Some games really make you feel valued as a consumer, and this would have to be one of them. The work and care invested in Amanda Rose is immediately evident with gorgeously detailed scenes to explore as an almost seamless adventure unfolds. The gameplay is interspersed with comic-style graphics and dialogue, which fills out the overall game quite a bit, and can be skipped entirely, but the artwork is so beautifully executed that it's a pleasure to watch the story unfold. There's additional dialogue from Amanda Rose's character, which at times feels unnecessary as it points out the obvious.

With the quality artwork and amazingly detailed scenes with expressive characters that look almost three dimensional, the game starts with all cylinders firing. Unfortunately, the momentum slows in the last three or four chapters, which are shorter in duration and gameplay, as the artwork looks less detailed and the games, both hidden object and puzzles, start to feel less challenging to the point of being underwhelming. But the design, sound effects and intricacy of detail makes this point forgivable.

Gameplay is very linear; objects need to be found and puzzles solved before you can progress to ensuing scenes. Much of the challenging gameplay lies in the hidden object games, as the puzzles are more or less based on sliding tile puzzles, and as such are not a strong element of the game despite being beautiful to behold. When all the items are found in a room, the game lets you know which saves a whole lot of fruitless pointing and clicking. The game itself plays for approximately three or more hours, but that is entirely dependent on how much dialogue you wish to skip.

Amanda Rose: The Game of Time is a magnificent example of developers investing so much work and care into their games, and Renergy has created a beautifully detailed game. From beginning to end, this is a game that will captivate you with its imagery, sound and imaginative tale, and one you'll remember for quite a while after you've finished playing.

Chapter 5: The Mystery of the Horseshoe

Chapter 12: The Abandoned Mine

Chapter 14: The Mystery of the Ancient Key

Chapter 5: The Mystery of the Horseshoe

Chapter 12: The Abandoned Mine

Chapter 14: The Mystery of the Ancient Key