You may remember Spryfox as the fiendish masterminds behind the unputdownable Triple Town, among other hits, and with their release of Alphabear, free for iOS and Android, they're gunning for the free time of word game fantatics in a big, adorable way. The goal is simple... spell words by tapping available letters to select them in order, and get points based on the word and any multipliers you may have. The catch is that each round an available letter on board isn't used, it counts down by one, and if it reaches zero, it turns into a stone, blocking part of the board and hindering your ability to make sweet high scores... by growing your bears bigger. That's right, folks, as you make words on the board, tiny, well-dressed bears appear, and they grow bigger the more room you clear for them, allowing you to get a higher score, with each game ending when the board is clear of letters. Performing well means you'll actually unlock bears your can take into a game with you (though some have cooldown timers), to get bonuses like extra points for certain letters, or a final score multiplier. As Alphabear is free-to-play, you need honey, which is generated slowly over time, to play new games, though you can opt to buy more with in-app purchases, convert bear coins you earn into honey, or just buy infinite honey for $4.99USD so you can play as much as you want, whenever you want. With different puzzle boards unlocked each day, different modes, "boss" levels and more, Alphabear is an addictive, charming game that no word puzzle fan should be without. 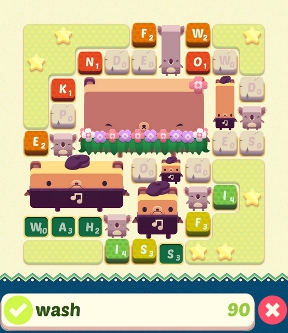 Alphabear manages to hit that sweet spot of being perfectly designed for quick bursts of play whenever you have a few minutes, but also being so fun it's hard to tear yourself away from it. It goes without saying that it looks fantastic, with Spryfox's tiny critters bouncing and waving from the soft colour palette, and each unlockable bear is cute and helpful. While the bear you receive for meeting your stage's goal is random, even if you get a bear you've already received before it still isn't a waste, since that just makes the bonuses that bear offers that much more powerful. It makes it feel like Alphabear respects your time, though honey generates slowly enough compared to how much you need to spend to play that you'll probably want to fork over the cash for the infinite option even with the ability to exchange coins. Which, you know, isn't bad, because Alphabear does feel like it's worth the cost of admission if you find its "just one more game" style of thinky wordplay wrapped up in cuddly visuals a hit, which the free mode will allow you to try on for size. The time attack and other modes don't actually make that big of a difference to the basic mechanics, though the bears you "equip" can make a big difference. Since some of them mean particular letters appear more frequently, or last longer, you actually have to think about which ones you take, and they all feel useful. Alphabear is both casual and smart enough to make it the sort of game you'll keep coming back to, especially with the different bears to unlock. If you like puzzle games that don't demand a lot of your time but still engage your brain, Alphabear is a definite recommendation, with casual gameplay and a presentation that will charm just about anyone.