In SpryFox's gorgeous indie roguelike strategic puzzle adventure Road Not Taken, you're lost alone in the snow-swept woods and beset by evil spirits until you discover a strange staff with a blue flame that allows you to levitate objects around you at the cost of your own energy. You're rescued by a fisherman who takes you to a tiny, remote village where, it turns out, that staff just so happens to be the symbol of a Ranger's office. Your duties? Well, for the most part, you're tasked with finding and rescuing the children who get lost in the forest each year while picking the berries that the town exports. But the woods are deep, dark, cold, and ever-changing, and it's not just the malicious entities, freezing temperatures, and wildlife you'll need to watch out for. Combining randomized puzzles and a subtle yet engrossing narrative with a clever crafting mechanic that allows you to create an amazing amount of new things by combining objects and animals around you, Road Not Taken is a smart and oh-so-gorgeous game that will keep you coming back for more. 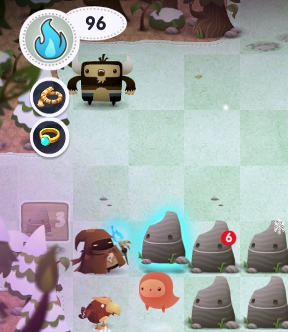 Road Not Taken is basically the picture-perfect definition of "easy to pick up, hard to master". In each turn-based level, you have to find and rescue at least half of the missing children by returning them to an adult. Not only are the levels completely randomized, but proceeding depends on moving and combining all the creatures and objects you find. The forest is broken up into sections, and moving from one to the next generally requires you to place a certain number of a certain type of critter or object so that they're touching. You can pick up and throw anything touching you on four sides by using your staff, but carrying anything slowly depletes your energy when you move unless there's a fire nearby to warm the area, so play quickly becomes about figuring out how to conserve as much energy as possible by tossing things around the screen. Since you can't move if the item you're carrying has its path blocked in that direction, you'll have to carefully shuffle your way through areas by moving everything around you bit by bit.

This gets harder as you play and discover more objects, since nearly all of them have unique properties and react with each other in different ways. Wolves will attack you if they can't move away when you come near, for example, bear totems can't be moved if they're touching anything, and if you throw a mole at another object, the mole will switch places with it rather than simply coming to a stop. Further complicating things are the recipes you can discover... combine three beehives to create delicious honey to restore energy, or a light spirit with an ancient mortar to create a potion that allows you to pick up typically immovable objects. Not all recipes are beneficial, however, and with 200 to discover, you'll have to play a long time before you're the master of your environment. 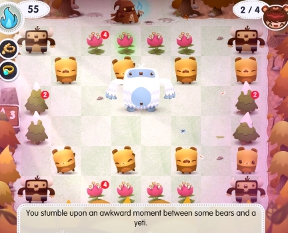 Between chilly forest excursions, you can spend time getting to know the townsfolk. By giving them gifts of the things you'll find like berries, coins, and rice, you can increase their affection for you, which can lead to a variety of useful, equippable items that confer bonuses, or simply more recipes. Get to know someone well enough over the years, and love could bloom. Of course, the thing to understand about Road Not Taken is you're going to fail. A lot. Each "year" is a level, and as the years pass, the game ramps up the difficulty in a big way. It gets more and more difficult to save all the kids in each stage, and sometimes you may have no choice but to return to the mayor and accept your losses if you can't figure out a way to reach them all without losing your energy. If your energy runs out and you die, however, you'll simply restart the game as a new Ranger with randomized new townsfolk, though you'll keep your Book of Secrets and all the critters and objects you've already encountered will be in the forest right away. Getting to the end of a career by completing all the years is challenging enough, but doing so and rescuing every single child? That's far, far harder.

Analysis: Despite appearances, there are some surprisingly grim undertones happening beneath Road Not Taken's storybook visuals. The fact that the townspeople have to use their own children as labour in dangerous conditions is sad enough, but things take a more morbid turn if you talk to the mayor on the occasions you find yourself unable to rescue all the kids. "Every winter we lose a few," he says flippantly, "we'll make more." There are a lot of unexpectedly dark themes running underneath the game's cuddly exterior, and Road Not Taken masterfully weaves a narrative around you with just a few lines of text at a time. The townsfolk actually aren't that randomized... no matter what their colours, they all behave the same way and say the same lines over every playthrough. Still, through your limited interactions with them, they manage to display a surprising amount of depth of character, and it's worth it to try to play through a relationship with all of them at least once. (Readers may want to note that one character's conversations have an implication of physical abuse, so caveat emptor.) This is a game that plays with your emotions, from the way colours change with subtle warmth or chill depending on what you're doing or seeing, to the way the histories of the town and its people, as well as the underlying messages about normality and doing what's expected of you, and even the way it deals with a person's physical sex, are implied rather than fed to you by the bowlful, and you'll be hooked every step of the way. 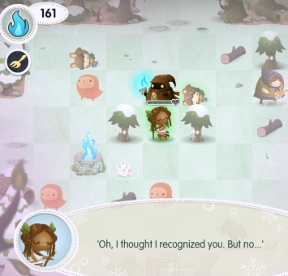 Road Not Taken is one of those games that manages to be both more rewarding and more challenging every time you play it. The more content you unlock, the more new combinations and rules you have to learn, and even early levels become complex with each replay. It's not uncommon to have to move objects between areas to meet the requirements for unlocking a path forward, and chances are there are going to be more than a few items you'll grind your teeth at when you see them. Deer? Stupid jerks. But the more you learn, the more you discover tricks to get yourself out of seemingly impossible situations. At the same time, because of the emotional hook, failure is even harder to take... there's no undo, no takesies-backsies, and when you find yourself unable to rescue all the children, you take it as a personal failing, not because the game is unfair (which it isn't) or challenging (which it definitely is).

If you're looking for a puzzle game with well thought out roguelike mechanics and elements that compliment one another as much as they challenge you, Road Not Taken will meet that need. But if you're looking for a beautiful and unsettling subtle narrative that'll make you think about people and yourself, Road Not Taken will do that too. It's just about as strange and complex, happy and weird, funny, sad, and scary as real life is, and the stunning, expressive visual design and use of sound makes it gorgeous from every angle to boot. It's an unusual cocktail of a game that deserves to be played, and with the impressive amount of replay value to it, you'll be playing for a long, long time.

Are these guys going to get complained at by that one guy that thought someone copied his graphics style? These look like those. Remember that guy? I can't. He posted some big infographic thing somewhere describing the similarities between his game and some other game that came out later.

I sort of know what you're talking about, but I'm curious as to why you think it would be a factor here?

I don't really think it's any sort of factor. Just for some reason I thought the graphics looked like what I think I remember from that whole deal and I wondered if I was right.

@shipoopie
I did the art for this game. Do you have a link or something to the story you're talking about? Curious.

The art reminds me a bit of Glitch.

Looks like Monsters Ate My Birthday Cake is the game that got complain-o-fied and the one who complained is someone called Sounas.

True. It was pointed out here a while ago on Mobile Monday. Some images in Monsters are rather same-y, to say the least. But I don't see any similarity in Road Not Taken.

Thanks for the info! I looked the story up and I'm not quite sure what to think. I think when you work in a simple, chibi, dot-eyed style, you're inevitably going to get some similar looking elements. When you work really hard on a project, your creations become your baby, and it's hard to fault Sounas for trying his best to protect his work.

So glad you're back, Kukubee. I've really missed Glitch! We were so sad when it folded, and there's been nothing like it since.

As someone who has been watching meowza's art develop over the past decade (and played Road Not Taken), I must say he's pretty safe from any such claims. :)