My great-grandfather, or at least the man I pretend was my great-grandfather when it's convenient or hilarious, was the great General George S. Patton, Jr. He was a man who knew his strategy, especially when that strategy involved advancing, attacking or conquering anything remotely resembling Axis territory. The Seventh and Third United States Armies wouldn't have been the same without him. Today I try to live up to his legacy by being the best video game strategist I can be. In Highgrounds, a turn-based defense/strategy game from Spry Fox and Heart Shaped Games, I embody Patton at his greatest by sending hordes of angry wolfmen and golems to do battle with ghosts, skeletons, bandits and other creatures that probably dislike America. Sure, I probably won't go down in history for my endeavors, but I get the feeling it's also a little bit safer than World War II. 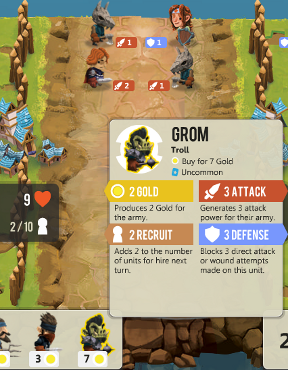 Highgrounds is essentially a collectible card game rendered as a strategy game. You've got armies consisting of up to 28 units which you pit against other armies in an attempt to take down your opponent's city before they do the same to you. There are two things to keep your eye on... your gold, which is generated each round and used to buy more units, and your population, which determines how many units you can actually have. At the start of the round, you will be given a selection of various soldiers, and mousing over them will give you a rundown of their power and any special abilities. Just drag the one you want to the field to select it and click the crossed swords icon to start the round. The side with the most attack power, as tallied by the numbers next to the little swords above each unit's head, "wins" the round and deals damage to their opponent's base, and the first one to knock out all of the other's hit points wins.

Note that to save progress and actually challenge other players in matches, you need to register for a free account. Doing so will also allow you to edit your army, buy new units, and even change which city you use, which can impact your gold per round and other factors. If you feel like spending real money, that's the only way to get the Gems needed to buy "Booster Packs" of new units. You may find, however, that the units you earned through simply playing were able to hold their own against the computer opponents without much issue. Naturally, when it comes to other players you're dealing with both the units they have available to build armies and the strategies they employ, so your results may vary. In general, though, when you buy units you're paying for variety moreso than power. Building new armies that focus on different abilities is engrossing and the main reason to buy Gems is the chance to play around with more esoteric units, such as units that "generate" resources by taking them from the opponent or units that get stronger when combined with others. There's quite a few scenario battles where you fight against a computer opponent, but many players will find that the real game lies in battling other humans online. Options are available to create matches against random or specific players at your discretion. 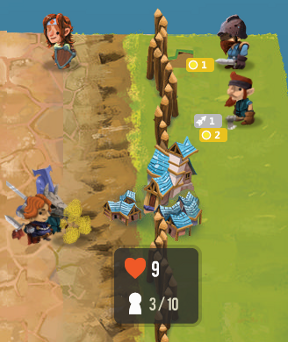 Analysis: The difficulty curve in the single-player game stays fairly constant. I didn't encounter any situations where I ran into a brick wall, though there were certainly matches I lost through poor strategy, bad luck or both. Again, when you're playing against humans it's difficult to say what the game's difficulty will be like. One high point of PvP matches is that Highgrounds takes full advantage of its turn-based nature and allows for asynchronous play like you might see in Words with Friends or similar games. You can make moves at your leisure and check back when you get the time to see if your opponent has done the same.

Highgrounds has a unique visual style that looks a bit like the claymation films of yesteryear. Most, though not all, units have unique appearances that make them easy to identify at a glance. Sound effects and animation are fairly simple, which makes it easy to keep track of what's going on during a match. Strategists and fans of collectible card games alike are bound to enjoy Highgrounds. Unlike many games that employ a similar model, microtransactions don't spoil the fun. Instead, players who try the game and like what they see have the option of paying for more without being forced to break out their wallets in order to enjoy themselves. It makes for a fantastic lunch break sort of game where you can play when you get time.

I really like this game. So far the only complaint I have is with my first multiplayer game. It matched me with a player that was very slow, it kept saying they were offline, sometimes for several minutes, but there was never any indication that there was a time limit for that player to finish his move. In fact, besides the name, I could not find see any indication of their level either. The other player had much better cards than me, but I am not sure if this was because they were a higher level, or if it was because they bought the cards. This could be a really great game if multiplayer was a little more balanced and fleshed out.

The multiplayer is not live. You put down your move, then when that players comes online, he puts down his move and the turn can go on. Think of it as online Scrabble or Words with friends. Just go do something else and come back once in a while to keep the match going.

I liked the game, but even on fast, it plays a bit too slow for all the grinding you need to do to get cards without using real money.

Fun game until I was expected to register for an account to continue and after reading what others say about the online experience, decided to pass.

I agree - the grinding is awful. When I beat the fourth level, I was awarded 500 points. The fifth level seems nearly impossible because the opponent has several really powerful characters, but I'm stuck with the same wimpy team I started with. When do I get a new character? At slightly over 13,000 points!!! Considering that each level takes at least 15 minutes to play and awards about 500 points, this means it will take about 6.5 hours of playing the same level over and over to get a single new character, which might be as exciting as the last one I got, which merely takes up space and generates crystals (which I don't seem to need). I like the game, but I think I've reached the end of its fun.

Hippasus, the key to defeating your opponent is not necessarily having the best cards, but setting up your deck correctly. Using guys with wound and arrow can knock out your opponents resource generators so they can't get their powerful characters out in time. Make sure you are switching your front lines up in order to correspond with their attackers, the AI is pretty weak in this area, and with a little luck in your draws you should be able to lock them down with little problem. In the beginning you should not be using any of the crystal characters at all, just take them out of your deck.

Are you supposed to get points for repeating battles against computer opponents? Cause I've been trying that, and my point total isn't changing (and I've run out of new computer opponents). And if that's the way it's supposed to work, then it looks like I won't be able to get any units beyond the 33 I have now.

I see from the official FAQ that you start with 16 units and get 15 free from the single player campaign, and up to 6 per week from rising in rank. That's... not very many cards.

I cruised through all the computer opponents; the strategy is not very hard.

Once I hit human opponents, though, the game changed dramatically. They were pulling out much more powerful units than I had, and I got slaughtered three games in a row. I finally won on the fourth game, due to several incredible strokes of luck: Basically, all my wounds managed to land on vulnerable high-value targets.

The cards are ridiculously unbalanced.