A Fall From Grace

Studio Maarten's Samsara Room may have given you the idea that this developer is weird in the most wonderful way. The point-and-click adventure game A Fall From Grace cements that by being about a space-faring couple who crashes their magical flying carrot and must reunite on a bizarre world by using the powers of good and evil to make rotten apple bridges, sail paper boats, and other completely logical things. Obviously. Click around to move and interact, and click the icon second from the left in the top bar to swap control from human, to angel, to devil and back. The human can walk between scenes and interact with most characters, while the angel and devil both influence creatures and the environment in different ways. Don't worry about making moral choices so much as proceeding, and click the far left icon in the upper bar to cycle between available items. Wait... what is that? Is that a... oh, it's your arm. I thought it was a... uh... pool noodle. 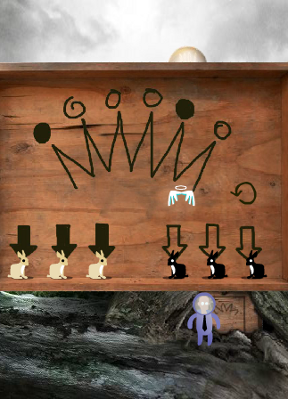 There's weird and then there's A Fall From Grace, and with its strange imagery and gorgeous design, it snags your attention right away. Too bad the game suffers from being almost too weird in a way that makes it difficult to intuit what should come next, or even tell any sort of coherent story whatsoever. The best surreal games are those that work from their own rules but also have their own logic that the player can figure out and learn to work with and anticipate. A Fall From Grace, unfortunately, is all over the place to the point of simply feeling random most of the time, and throw in some clunky navigation on top and you have a game with enormous potential that stumbles maybe a bit too much for all but the most patient gamer. I was also sort of hoping for more choice in progression, given the good-and-evil concept, but nope, it's dead bunnies for everyone, so sensitive folk might want to steer clear. It's a bit of a bummer, to put it mildly, since the game's formidable length, striking visual style, and clever concept have all the makings of a real winner, and a bit of streamlining and retooling would have put it head and shoulders above the rest. Some great ideas and fun, unique puzzles make this one still worth checking out... especially if you tend to think outside the box yourself.

Play A Fall From Grace

A Fall from Grace Walkthrough

Getting a Ride Across the River

Getting into the Lightbulb Structure

Escaping with Your Friend

Haha, thanks for the noodley note.

A Fall from Grace Walkthrough

Getting a Ride Across the River

Getting into the Lightbulb Structure

Escaping with Your Friend

Beat by the slide puzzle. Even knowing what it's supposed to look like, I can hardly ever get em.

The pictures aren't showing up...

I hit an error. The man just disappeared after I had him pick up the dead rabbit and go into the distance to talk to the hammer guy.

Hate the slide puzzle. But the worst part of the game is the terrible pathing. If you enter the screen from the right you should be able to click the exit on the left and the character should walk to it on his own (or else it should just automatically go to the next screen) rather than having to manually finagle with clicking on just the right spots to get him to cross some narrow path.