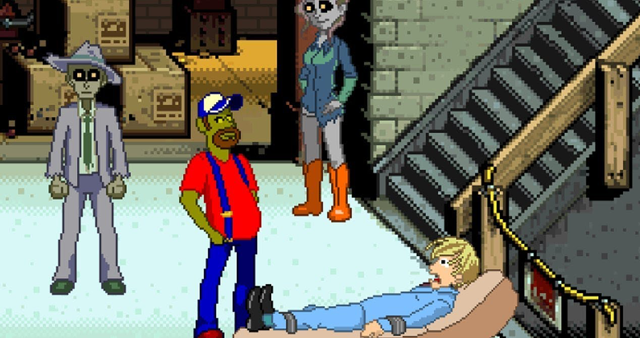 Although this time of year we are hanging Christmas rather than Halloween decorations, zombie society goes on (un)-living all year around! And if you're in that kind of mood, a belated adventure awaits you in the tale of Zombie Society Dead Detective: Brain Drain. It seems that a certain brain has been stolen from a brain farm. It's not just any ordinary brain though, but an inedible brain! Who would want to steal a brain they couldn't possibly eat? Naturally, the zombies called the zombie police, but after a sluggish response, decided that the zombies in blue would be no help, as it's technically not even a crime to steal an inedible brain. That's when they considered a second option and you come in - Detective Margh to the rescue. You've built up quite a reputation by now, after all, for solving a number of famous cases.

Along you go then, to find out where the missing brain has gone. You'll discover a long-standing rivalry between two brain farms, who compete in a test of brains and brawn (although mainly brains, of course) in entering a competition for producing the best brain of them all. [name]'s farm usually wins the contest, but this year his main competitor, [name2] is determined to give [pronoun] a run for their money. Could there be some foul play involved between the two parties, with one attempting to gain an undeadrhanded advantage? Never fear, it's your job to sort that out along with your trusty tools.

As usual, the mouse will suffice to interact with all of the elements featured in the game. Hovering near the top of the screen brings up several options, including the briefcase where evidence is gathered and can be presented to cross-examine key witnesses, your notebook where you can formulate and analyze your deaductions, a map to quickly travel around points of interest in the case, and more. Enjoy, even if it is a bit late!