They're coming for you, Baaaaaaaaaarbara! Good thing you've got some serious man-and-woman-power on your side in Goody Gameworks' zombie-riddled tower-defense game Zombie Riot, where you're trying to get from one end of a newly post-apocalyptic city to the other in order to escape. Standing, or, um, shambling in your way? A whole lot of brain-eaters. In each level, zombies will come at you along set pathways, and it's your job to place defenses (in this case, characters with different abilities) in their way to kill them before they can reach the other side of the screen. Characters will only attack a zombie headed straight for them, so covering all the rows onscreen is essential. Placing characters costs Command Points, which are generated slowly over time from the golden poles onscreen, but if you place a character near one of these mysterious shiny objects, points will be generated much faster. As the game progresses, you'll find different characters with different abilities, and also be able to upgrade the ones you've got. You even have special skills you can deploy, but since each one has a cooldown before it can be activated again, you might not want to be so quick on the trigger to use them. 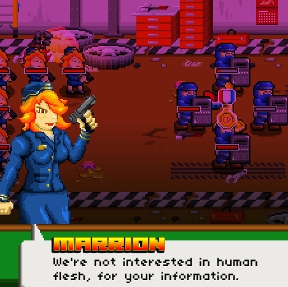 Alright, so Zombie Riot is basically a less cutesy, simplified Plants vs Zombies, which isn't necessarily a bad thing. Its goofy vibe actually works in its favour, especially with Goody Gameworks' great pixel artwork, but more importantly, as a defense game it plays very solidly too. Each of the different characters serves a purpose that feels like it compliments the others, from Marrion's long-range attacks to the way Gordon can instantly smash through any zombie's armor even standing behind Jim's riot shield. (Like the old saying goes, sticks and stones won't break their bones, but pipes will cave their heads in.) You can actually capture a command point if you place a character adjacent to it even if it's in a different row, which becomes important to strategies later in the game when you're dealing with bigger waves of undead right off the bat. At the same time, however, Zombie Riot feels like a very slow game, and not just because you can't fast-forward during levels. There's very little variety between many stages, which makes it seem like fewer levels with more creative, challenging design might have hooked a player's interest harder and earlier on to boot. Zombie Riot doesn't really do anything new, but it's a fine little defense game with all the flying limbs, big hair, and 80s horror movie tropes you could wish for.

Got to Big Joe's Meatery, where the game becomes completely impossible. I've spent half an hour on this level and maybe I shouldn't have spent my points the way I did, but it's too late now.

For every line, one shield far to the right, one empty space behind him so basketball zombies can't hit behind him, and as many guns behind him as you can fit. If there are any rails, put two electricity beside the rail. If you have a TON of money, you can try rocket launchers, but don't bother with any other character types.

Max out electricity damage and shield health as soon as possible. Max the strength of the wall and mega boomerang abilities, too--both are great for keeping zombies off your back. I used the sniper shot for the last ability, but ice or damage-all might work as well. (Electricity turrets don't seem to do much damage.)

It's really disappointing how useless pipes become when the basketball zombies show up. They do 100 damage in 6 seconds, compared to 50 for rocket launchers and 30 for guns, but there's just no way to keep them alive while keeping them in the action.

Overall, it's both incredibly difficult and seriously imbalanced--you pretty much have to cheese the later levels to have any chance at all. Still, it's a good time-waster.