Wyv and Keep: The Temple of the Lost Idol is finally here! After almost three years in the oven, A Jolly Corpse has released its fully-baked and delicious puzzle platform game to the masses. It's got excitement. It's got adventure. It's got treasure. It's got multiplayer co-op. And it's got enough challenge to keep you scratching your head for a very long time. 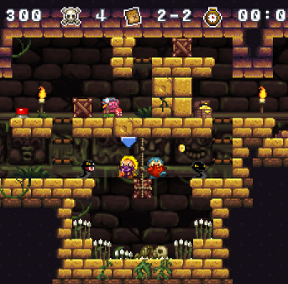 You control both Wyv and his buddy Keep as they work together to solve puzzles in a series of single-screen levels. The goal is always the same: get a crate on top of the button to open the exit door, then get someone to the exit. Actually accomplishing that is going to take some serious puzzle solving. Wyv and Keep can jump, pick up some items, push crates, and perform the occasional context-sensitive action like cutting a rope. Switch between characters as you position them in the correct places, using their noggins as temporary platforms to get everything where it needs to go. It's a lot like a simplified version of The Lost Vikings mixed with a touch of treasure hunting.

In addition to the main game, Wyv and Keep packs a level editor called Wyv's Cartographer that's surprisingly powerful. Not only can you create your own puzzles, but you can add custom artwork to make it look just the way you want. Map sharing forum thread, here we come! 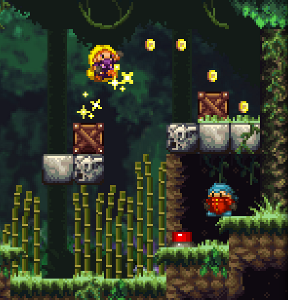 Analysis: Wyv and Keep is a seriously challenging game. If you think you're going to blaze through all 60 levels without breaking a sweat, you're in for a surprise. Puzzles take on a strong order-specific nature to them, forcing you to work out what needs to go where and when it needs to go there. And just when you think you've got it all figured out, you realize one of your characters is left stranded in the corner by that crate you just blew up. Time to start over! It's the kind of difficulty that inspires you to press onward, though, so don't get discouraged!

The storyline in Wyv and Keep is ancillary, but because the pair is such a quirky comedy duo it falls in place quite nicely. As new environmental obstacles are introduced you get to read about them in journal pages left by a previous adventurer. It's great watching the characters react to things as simple as sticky mud or statue heads that shoot fire spears. Also, the animations are a lot of fun to watch, especially when Keep or Wyv starts crying when the other one kicks the bucket.

The only real drawback to Wyv and Keep is its insistence upon keeping score. A running total of the time you take staring at the screen is kept, and each time you die you incur a small penalty. That also includes restarting the level because you got stuck. This feels a bit like punishment for not being able to see into the future, but for many it's just further incentive to go back and get a better score.

Wyv and Keep has been a long time coming, but it was worth the wait. It's a polished and well-made puzzle game, and the addition of co-op easily pushes it over the line into exemplary status. A great game no matter how you look at it, just be prepared to do some actual puzzle solving!