Shiver ye whatevers, you've got some questing to do! In Written Legends: Nightmare at Sea, the new hidden-object adventure from Vast Studios, you find yourself stranded under the sea with nary a pineapple to call your own. Curiously, you're still alive... or at least, you think you are, but right now you've got more pressing matters to worry about. You soon discover that none other than Davy "Stink Eye" Jones himself is behind your predicament, and he's a class A jerk who has no intention of letting you go unless you adhere to his demands... and if you fail, it isn't just your soul on the line. Your dear old pappy's been dad-napped and the others Davy Jones has sunk seem to have given up. Will you be able to rescue everyone and break free, or are you destined to become some more deep-sea flotsam, floating around underwater for all eternity? 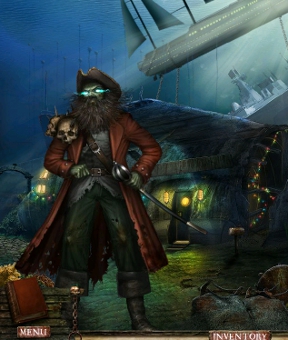 Like most games in the genre, you'll find your time split between good ol' fashioned adventurin', and good ol' fashioned hidden-object huntin'. But while there's plenty of the latter to be done, much of the focus is on the former, liberally sprinkled with puzzles to taste. Sparkles and glimmers draw your attention towards objects of interest, and your cursor will change to a hand or magnifying glass when you move it over interactive areas. The locations you'll be exploring are surprisingly large and varied, so you should keep track of what you're supposed to be up to by referring to your tasks in your journal if you ever get lost. On the opposite side of the screen, the lantern offers up a random item during hidden-object scenes, but also lights the way towards hints and clues if you have business you can handle in the area you're currently in. So, yes, it's just like I've been telling people for years now... button mashing is the solution to everything. 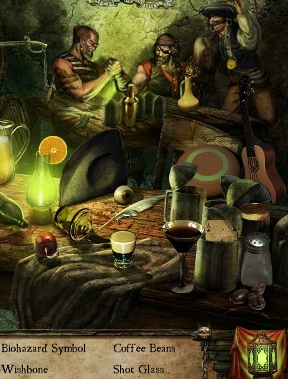 Analysis: The underwater locales are beautiful, dark, imaginative, and strange... exactly the sort of place you can picture The downside, unfortunately, is that because the visuals are going for the whole "shabby-chic abandoned at the bottom of the briny deep for an eternity" vibe, that grim griminess sometimes interferes with hidden-object scenes. On the plus side, it is the sort of thing your eyes naturally adapt to as you play, and if you've been waiting for an epic, cheesy adventure this is definitely it. The story is somewhat bizarre, but enjoyably so; trapped and tortured souls, an underwater doom fortress, blood scrolls, and even a dancing skeleton parrot all make an appearance. There's actually a heavy emphasis placed on narrative, which is a welcome change in a hidden-object title, and the game is packed full of eccentric characters to talk to and twists aplenty. It helps keep the plot first and foremost and make you feel like you're actually engaged in an adventure rather than just trudging around a series of tenuously connected puzzles and mounds of items to sift through.

As far as the actual gameplay goes, Nightmare at Sea is pleasingly varied, if not particularly challenging. Item usage can occasionally be finicky, demanding you to click on the precise spot, and hidden-object scenes can be likewise fussy. Where the game shines, however, is in how well its theme and setting is integrated into everything from its hidden-object scenes to the puzzles themselves; while most are variations on types you've seen before in other games, the puzzles herein are beautifully designed to fit their eerie underwater setting. Written Legends: Nightmare at Sea is just plain outlandish, swashbuckling fun. It's chock-a-block with oddballs, legendary figures, and dark, creative environments. Clocking in at somewhere between three to four hours in length for most players, it manages to overcome its flaws to deliver an imaginative and engaging undersea adventure, so genre fans will want to check out the demo for sure. It does make one wonder, however, why Davy Jones got the starring role when everyone knows that the Flying Dutchman is clearly the more terrifying choice. Regardless, dive on in with this fun undersea excursion... just remember to keep one hand on your Krabby Patties at all times.