The heroes of Mezzanine Stairs' turn-based strategy RPG World's End Chapter 1 are surly, drunken, rude, violent, and more than a little bit potty-mouthed... but then, so is everyone else in this crumbling society. When the opportunity presents itself to make a bit of cash off of a crate of stolen cigarettes, laconic Ivan, hot-headed Ysabel, and deceptively scatter-brained Tevoran decide to seize the chance... and batter, slice, shoot, and stab anyone in their way. Including the criminal cartel who wants their loot back. Fortunately, our heroes(?!) can handle a bit of a scuffle... but can they handle the rest of the trouble and mystery headed their way? 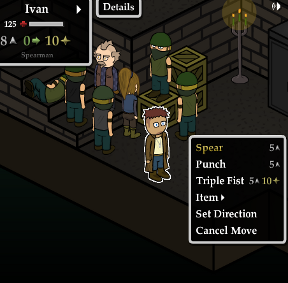 The game is broken up into combat, party management, and cutscenes in a very Final Fantasy Tactics sort of way, with control typically handed over to you when things get violent or you need to equip or otherwise set up your group. During battle, you move your characters around the map on a grid, positioning them to attack enemies, use their special abilities to their most effectiveness, and take advantage of the terrain to defend themselves. Many attacks or abilities are best used from a distance, or when enemies are arranged in a certain way, making strategic thinking a must. Back at the hideout, you'll be given the opportunity to stock up on supplies and buy new skills or increase your "heroes'" abilities... though you'll want to weigh your options since they all share a limited pool of skill points. Cash is, perhaps fittingly given the dystopian setting, very hard to come by, and items are expensive, so make sure you think carefully about what you need. 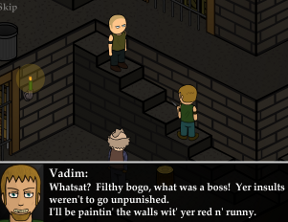 Though it does suffer a bit from some slow pacing and world building, World's End Chapter 1 largely succeeds as a bleak, comedic strategy RPG in a unique setting. Some people may find the constant barrage of slang and unfamiliar lingo a bit hard to swallow (even Ysabel complains about it at one point), but if you've ever visited the Planes or Seattle, you'll take to it like a foul-mouthed duck to water. The overall tone and setting aren't what you'd call pleasant, so you'll need an appreciation for dark humour and party members that are about as anti-hero as you can get. A lot of the subject matter herein is both fairly grim or mature, and treated somewhat flippantly, so player discretion is advised.

Though it does take a while to get the ball rolling, however, World's End Chapter 1 eventually reveals itself to be an extremely ambitious piece of storytelling and gaming in general. It's a challenging game, and the amount of work gone into crafting everything from the setting to the strategy is clear. It may sometimes feel like its dragging its feet, and I wish it would have made more of an effort to incorporate its world building into the main game instead of hoping you read the in-game Codex Mass Effect style, but it's a meaty chunk of RPG strategy gaming that has an enormous amount of potential to grow from. Just make sure you hold on to your save file for chapter two!

I liked the game at first, but quickly became annoyed with the oddities involved in manuevering and targeting bad guys.

The spear-guy has a heck of a time hitting anyone who doesnt line up perfectly and there are lots of stairs, platforms, etc that make lining up a shot difficult. Even the archer can't hit enemies half the time due to some bizarre cover rule. So you wind up experimenting trying to move her around so you can actually land a shot. Its extremely frustrating.

Then the killer. You hit SAVE: Doubleclick a slot. Ooops. You just RELOADED an existing game!

Dude, I love this game. The language, first of all -- the language is so deft and so daft. Someone who kissed the Blarney stone really worked on this. It may be cheesy... a lot.

I about snorted my tea over the pugilism vs. buggery line.

You'll only hate all that text if you lose a battle and then have to replay it, so just... don't lose battles.

One stumble is that the characters are rather clearly stereotypical, especially in contrast to the layered gunk of the world-building. But they are built up enough over that frame to be distinct, and thus far there aren't any cheap shots or Oh-Too-Soon dips in taste level i.e. if you can't get past the first scene then this one's not for you, etc.

Strategy buffs will like this. Using the environment is key to the game.

Strategy-wise, there's a lot to offer in terms of varying elevations. The world's not in perfect hex's but you're not boxed in either. If it looks like they can reach you, they probably can. And then you figure out how to TOSS BODIES and oh, it's on. Makes for great replay value, too.

Yes, certain things can be moved and used. (One bit I figured out too late was that there needs to be a separate lift operator.) It's just not a game that rewards haste; this grotty glory is made for rumination.

Inventory. I like judging games (and developers, I admit it) by their inventory. Passing grade. Loads of items will turn into a hassle later, but it's mainly built to upgrade your dysfunctional band, and in that it succeeds. I suggest some thin lines to separate the huge text blocks, 'cause it makes something simple look really confusing. Experience points are shared by the party, not hoarded by individuals.

I think this will fall into the valley of Wayward, in that there's no fault in the production -- just a conflict between its perfectly staged simulation and what gamers expect. A Watsonian game, to borrow a term; for instance your guys will have attack ranges highlighted but the enemies won't have that illustrated. Real life is so inconvenient. To the first commenter: the devs thought of that, so they allow you to take back moves right after you make them, in case your shot doesn't line up. They like us.

Great comment and feedback in general, Shudog. :) And I am pretty sure you can skip cutscenes if you don't want to see 'em, or if you've already seen 'em.

Unless I'm missing some kind of replay/grind option, it's pretty easy to shoot yourself in the foot (especially if you suck at these games like me). Some of the battles end upon killing a specific enemy, but if you go straight for him you miss out on lots of exp/cash. Then if you're struggling later with poor equipment and crappy fighters, your only option is to try it over until the AI gods smile upon you.

I find the game difficult sometimes (I finished most battles with many of my party dead), I did enjoy parts where I can to throw dead enemy bodies at other enemies (I made my party play ball during one boss battle). I guess tactical RPGs are harder than normal RPG genres.

BTW, can I transfer a save file from the armorgames.com version of the game (and therefore other site versions) to here? I've heard when doing this on another game that it's not so simple.

Nice game. There's a lot of strategy involved, especially when you're able to start inflicting status effects. I especially like the last level, where you can

pile up boxes at the beginning to cut off half of the melee fighters.