I think we can all agree that turning your future husband into a frog won't particularly endear you to him. On the other hand, when we're talking about a witch determined to marry an unwilling prince, this seems like a natural course of action. All she has to do is put a spell on him and be the one to kiss him, and he will fall in love with her. In Witch's Pranks: Frog's Fortune, a hidden-object adventure by Shaman Games, the wicked witch has not one, but two frog prince candidates lined up. The problem is that neither one wants to be kissed, so they are imprisoned until their change their little amphibian minds. This is where you come in: wandering through the forest, you see a strange house and witness the witch's most ignoble behaviour towards the royals. Since you have a soft spot for all things green and slimy, you decide to save them... and end up in a cage. 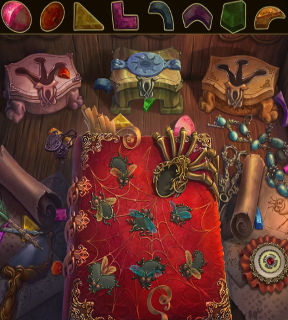 Your first task is to extricate yourself from your predicament and then to help the princes. Explore the room to find useful items and use them to set yourself free. Witch's Pranks: Frog's Fortune plays mostly like your usual garden-variety adventure game, with some notable differences. The inventory is on the top of the screen, which takes a moment to get used to. Some of the rooms can be scrolled through, so keep an eye out for green arrows, as they can be a little difficult to make out against busy backgrounds. Hidden-object scenes are few and mostly consist of finding fragmented items, and preference is given to mini-games and exploring. There is no map, but you don't really need one, because your path is straightforward and there is little backtracking. If you happen to get stuck, you can use the eye amulet, which points out interactive areas. 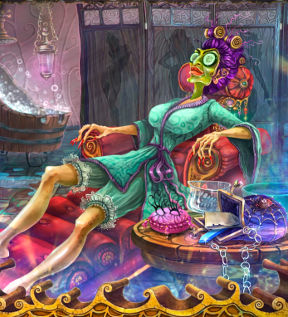 What really sets this game apart is its unique sense of humour which emanates out of its every pore. When the visuals are so quirkily adorable that they make you want to hug a fire-breathing salamander, you know the graphics department has done a good job. And yes, traipsing around head-spinningly colourful environments full of whimsical objects might seem a tad childish in the first five minutes, but Witch's Pranks has so much spirit that it draws you into its charmingly silly world and doesn't let go. It feels like stepping into a fairy-tale as told by a seven-year-old girl with pigtails, and that's one fun experience we all need from time to time. Too bad it's not a bit longer, though – it can be finished in less than three hours, and the time will fly by. Luckily, its unabashed joyfulness is contagious, so it will have you smiling long after you manage to save both froggy princes and their true loves.