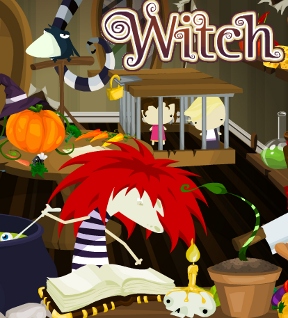 When flying one's kite, one should always been on the lookout for egrets, telephone wires, and witches. The aptly named point-and-click escape game Witch is a cautionary tale about the dangers of kite flying and is entirely true. You should definitely play it so you know what to do in case a witch ever locks you in a cage and ... what? "No such thing?" Friend, that's what the witches want you to think. (For further preparation in case of witch emergency, I refer you to Mr Dahl.) Shouldn't we already be suspicious of candy trails found in the forest anyway?

Your goal is to help the two adorable caged moppets escape whatever fate awaits them... hopefully. Click around on the screen to interact with items, and try to figure out what you need to escape. Witch is not what you might call logical, unless I missed something and my education was woefully inadequate in the many applications of pumpkin vomit. You'll need to experiment with every object you can click on to figure out how to reach one of two different endings. While this sort of gameplay does encourage a nice sense of discovery and experimentation that will appeal to some players, others may be put off by the trial-and-error approach. Fortunately, the Witch's hut is small, and little visual clues will steer you in the right direction.

Once you've figured out the correct order to click on which places, Witch is a pretty short and simple game. The game does not save your progress, and certain puzzle clues don't repeat, so make sure to keep a mental (or physical) note of any diagrams that might appear important if you want to save yourself some frustration on one puzzle. Despite its cute presentation, Witch earns her rating for some mildly ghoulish moments that might upset younger children. I can't imagine why not. I mean, I pop my own eyes out all the time when I cook. That's not weird. Just dedication. Speaking of, um. Did you happen to find anything... odd... in that soup I made for you yesterday? I'm... uh... missing something.

Thanks to Bogdan and Chiktionary for sending this one in!

A little rough on trying to figure out the right order of stuff, but good!

Well so far, I have gotten the fly to move the key, got the cheese, used the tentacles, used the hot peppers. But I can't move the cat and I cant get feathers from the bird... so any advice is welcome.

Well eventually figured it out, but it was a little frustrating guessing what was in the creaters mind. Particularly the order around the corn.

Walkthrough:
this only gives you one ending.

I'm at the same point as phdavoid, the fly moved the key, got the cheese, used the tentacles, used the hot peppers. But I can't move the cat and I can't get feathers. The crow says something, but I don't know what it means. I think I got to move the broom...

Thanks a lot for the review guys.Luv!

I did almost everything in the walkthrough, except the bug-fairy-frog thing. Instead I...

I let the kids out of the cage, then clicked the door. The witch then chases after the kids with the tentacle. While this is happening, click on the poison bottle on the shelf that leaks into the plant by the book. The crow then flies to uncap it, it tips over and empties into the plant, changing it into a maneating plant. It eats the witch and you are free to unlock the door.

the combination? i've been struggling for over 15 minutes

Does anyone know how to get the middle three achievements? #4 - 6 on the sign?

Rodent Bravery - After killing the cat/getting the key, click the left mouse hole again (prior to giving the key to the boy). The mouse celebrates its kill.

Wicked Eyes-Get all four wicked eyes.
1 - behind yellow bell pepper/purple radish on the witch's table
2 - click the three peppers on the round table
3 - get the Red Hot Chili Soup award. There's an eye in the chili plant pot
4 - after opening the cage, click the striped tentacle that comes down to get another eye

Something bizarre happened, I got a witch turned into a toad, and a witch that is still walking around, and I'm stuck
It was the third time I played it, and I didn't use any eyeballs.

Cute game! I personally don't see why it got the Y rating, but I'm a fan of "Better Safe Than Sorry," so no complaints. I did have one glitch - the game froze on me and I had to shut down IE and restart. Anybody else have that, or is my computer just being tempermental today?

I *am* a touch surprised no witches have complained about the stereotyping. I'm also surprised you didn't mention kite-eating trees in your article.

I don't understand why anyone is asking for walkthrough, there's a built-in walkthrough.

Anyone got the "alternate ending"?
I got two diferent finishing moves for the witch (frog or plant) but no diffrence in the ending...

i tried that. even when all rings glowed nothing happened. oh well.

Loved the game, great work! Tried it two times to get both endings (are there more than 2 endings?).

Love is free: When the children are still in the cage, but the boy has unlocked the cage door, click on the girl and she will give him a kiss.

Could anyone tell me how to get the flower person achievement ? I've already click the raven