[Note: Please be aware that this game contains reference to subject matter some players may find upsetting.]

If you live in the West, you might only know February 14th as the traditional consumerist expression of affection. But in some Asian countries like Japan and South Korea, White Day, a month later, is just as big a deal, and in a lot of cases, it's about boys giving gifts to the girls they like. Lee Hui-min just wants to sneak into the school after hours to leave some candy for the girl he's crushing on, So-yeong, but finds himself trapped inside instead. After witnessing something horrible, it quickly becomes apparent that he can't be found by the janitor patrolling the halls, and he'll have to find a way out himself... but the school isn't as empty as he thinks. Originally released in 2001, this horror adventure has now been remade and re-released by ROIGAMES for Android and iOS, featuring revamped visuals, more spooks, improved content and more. Though some issues still need to be patched out, it's a remarkably well done remake whose demo you'll want to check out... though maybe not in the dark. 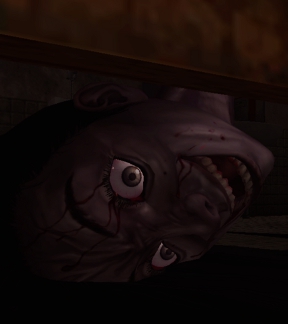 White Day controls like a mix between a classic point-and-click game, and an action-adventure, with several control schemes to choose from. The most basic is using the left side of the screen to walk and turn, while swiping around the right controls your field of view, with some buttons to toggle running or crouching for fleeing and sneaking, respectively. You can tap on items to pick up or interact with them, and your backpack, accessible by tapping its icon, carries everything from vital plot items, to consumable healing items, the messages you find, and more. The game is saved by using the various bulletin boards you can find around the school, and you shouldn't neglect doing so, since it's possible to die. The janitor roaming the halls will chase you down if he sees you, and the difficulty setting you choose when you start impacts how difficult evading or sneaking by him is... and he's not out to tousle your hair. Additionally, the school is practically heaving with all sorts of angry spirits, and you'll have to contend with them while you're finding your way around and solving puzzles. 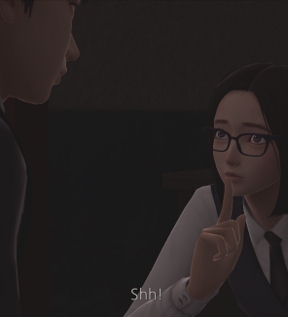 While there are a lot of jump scares, White Day's tendency to eschew most gore and violence (at least, by typical modern horror game standards) means it feels like more of a slow, oppressive boil than a cheap fright factory. I mean... it's weird, you guys. Frequently really weird in its imagery and some of its plot, but its dedication to creepiness with its shadowy corridors, unsettling specters, and immersive sound. While the original Korean version is still floating around out there if you care to dig it up and apply the somewhat rocky translation patch, ROIGAMES' remake looks and plays pretty darn smoothly for the most part. Orienting the camera when you're in a hurry feels just a little awkward, especially if you're trying to find a comfortable way to grip an iPad for the default controls, and an instant-access map icon would not have gone amiss. The character and environment models look gorgeous and smooth. People in particular actually look great, though more cartoonish than realistic, with expressive faces and solid voice acting across the board. As of this writing, a planned Playstation 4 port with VR compatibility is on the way, and White Day feels like it'd be a great fit during regular gameplay. As of this writing, there are still some aspects that could use polishing, like persistent bugs for some users as well as some untranslated text, though the developers have been hard at work with patches. 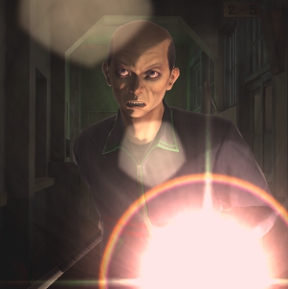 Reviewing this as a game rather than just comparing it as a remake, White Day still mostly holds up. While it often feels like your objectives boil down to "wander until you find this thing" or "wander until something happens", most of the obstacles in your way are at least fairly logical. The janitor is a constant threat, though there are times when the game feels like it would have been stronger without him. It can get tiresome having to drop what you're doing to hunker down in a toilet stall until the little searching eye icon vanishes from the screen. The rather hilarious overabundance of ghosts means the place if chock full of other dangers to contend with, and most of them are far more interesting. Tracking down all the little world-building documents and ghost stories is fun, even if a lot of them are more than a little over-the-top, though some of their backstories tend to fall back on disappointingly overused tropes some may find distasteful. Most of them won't do more than make you jump, though some will require trickery and cunning to overcome. To say the story gets a little convoluted is a bit of an understatement, but White Day's creepy setting, freaky characters, and fantastic presentation is still well worth it, especially with multiple endings to achieve. (And completely optional character costumes available via in-app purchase, if that's your thing.) Though not without its rough edges, White Day is a campy, creep-tastic game that's been given a wonderful update, making checking out the demo a must for any horror fan.

I have played it for a while,i like Korean game, coz the artwork is fine！horrible dark game is my taste!It worth to play!

This is so scary, although some defects are still present. White Day needs a constant Internet connection, also because of progress cloud synchronization, a feature that could spurt some nose.