Whispered Secrets: Into the Beyond

I'll tell you that planning a wedding is hard work enough without having to worry about some mad scientist stink-poisoning your future mother-in-law. I guess that's the price you pay when you decide to get hitched to some hotshot celebrity scientist with enemies, though, and in GrandMA Studios' hidden-object adventure game Whispered Secrets: Into the Beyond, as the bride-to-be Clarice you'll have to save more than your reputation with your future mother. It turns out the fate of more than one world hangs in the balance, and your beau had more than his share of secrets and jealous competitors. You'll have to venture beyond the ordinary into another realm that lives alongside our own and stop a madman with incredible powers at his disposal. No biggie, right? 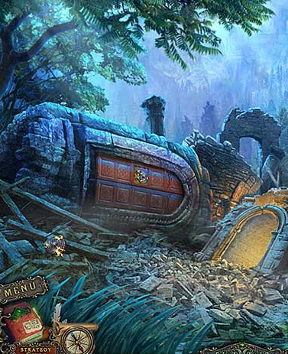 Whispered Secrets: Into the Beyond plays about as you'd expect for the genre, tracking down items and solving puzzles as you explore, though it does allow you to complete hidden-object scenes by playing match-3 games if you prefer. The game is packed with little extras, like achievements, and hunting down beady-eyed "Observers" in each area... which is surprisingly fun since they're often cleverly hidden and well animated. The biggest issue with the game might be that it suffers from a bit too much busywork, like forcing you to hunt down an item to be able to ring a bell before the police station will let you inside, which seems like a questionable business model when your business is being accessible to people who need help. Busywork is admittedly sort of a staple of the genre, but when its implemented in a way that futzes with basic logic to the point where it jars the player out of the experience, it's a lot more annoying. That said, the game definitely gives you a lot to do, and for some the endless parade of items to find and puzzles to solve (as well as creepy critters to spot) will be exactly what they're looking for.

Initially, the pace is very slow going, and if you prefer more action you might be put off by how long it takes anything to really happen. But though Whispered Secrets: Into the Beyond is slow going, if you prefer your games rich in imagination and science-fiction fantasy, you'll enjoy sinking into it. The developer's name (GrandMA Studios) might be pretty apt here, since the game's entire design is warm and inviting with gorgeous artwork and a streamlined UI. It's the perfect choice for casual players looking for something, well, casual, beautifully illustrated and engaging without being too demanding. The sort of game that basically demands to be enjoyed with a cup of hot coffee and a blanket wrapped around your shoulders. Whispered Secrets: Into the Beyond doesn't take risks with its gameplay or break new ground, but it's a solidly enjoyable game that provides a fun experience whose mysticism and adventure provides a welcome respite from the drama-heavy titles you usually encounter.

This came out in July.

Actually, this was released last week at Big Fish Games. :)