So, whales can't fly, right? Keep that in mind while playing Whale Trail, a colorful one button arcade "cave flying" game that has recently spread from iOS devices to include other mobile markets. Baron von Barry is chasing Willow the Whale, and in order to escape, she has to take to the skies, staying afloat by collecting bubbles scattered throughout the clouds. It's cute and colorful, 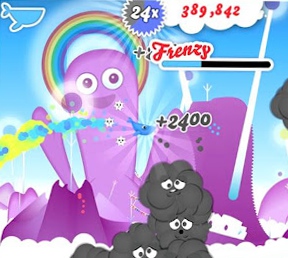 Tapping the screen in Whale Trail causes Willow to float up, not down, while releasing allows her to move towards the bottom of the screen. Colorful bubbles are drawn all over each section, and in order to get them, you'll need to follow some precise (but occasionally forgiving) patterns through dangerous terrain. The dark Thunder Bros. clouds are out to get you, and one touch from their electrifying fog will give you reason never to bump in to them again!

Whale Trail adds itself to a rather crowded genre, but it manages to stand on its own thanks to a delightful presentation and some cool extras like mid-air loops and the nigh-invincible Frenzy mode. A series of over 30 challenge levels have been added, with more promised in the future, that really make the game shine. Good length, great visuals, easy gameplay and a respectable level of challenge that increases appropriately as you continue playing. Whale Trail is a winner no matter how you look at it!

In somewhat of a reverse of the norm, tapping the screen in Whale Trail causes Willow to float up, not down, while releasing allows her to move towards the bottom of the screen.
...Am I missing something? Because I'm pretty sure that's EXACTLY the norm.

The controls are similar, but the physics are essentially swapped, because you're not trying to fall fast and launch off of hills. The line's confusing, so I'll change it.

I have this game on my ipod touch. It's great both for quick 'pick up and play' bursts of a few minutes, to hour long sessions. Beautifully executed, highly addictive. nice music and SFX too.

Guide to Whale Trail: General Tips for your Whale
Here are some excellent gameplay tips from onClan. I'm pleased to show you how to guide your whale to high score.

Whale Trail is a new endless game for the iPhone, where you play as the whale with the trail (not the fail whale!) and you go as far as you can, collecting blubbles (not a typo), racking up your score and earning krill (the currency of the game) as you go. You can buy upgrades and power ups which will help you increase your score, and even unlock new missions. Read on for some tips and tricks for Whale Trail!