Weirdos on a Train 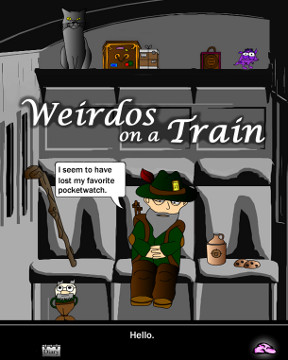 Wasabi, Sara's cat, ever appreciative of being rescued from cat-nabbing goblins, looks her deeply in the eyes and says, "Sara, we have a train to catch." She's quite miffed that her cat waited all this time to reveal his loquaciousness. Still, she gives in to his insistent demands and boards the midnight express, unanswered questions rolling through her thoughts, to travel through the countryside with a bunch of Weirdos on a Train.

You begin this point-and-click adventure from Tucker Bowen, author of the Something Amiss series, in your cabin in train car one. By following clues and using a bit of ingenuity, acquire the five tickets needed to reach—a mysterious someone in—car six. It feels a bit like an escape-the-room game meets Alice is Dead; the teasing discoveries, need to sleuth and narrative elements are here albeit the tone is much different, more unique to Tucker's talent as an artist and storyteller. Navigation seems a bit awkward, especially since one black and grey shaded cabin door looks much like the next. Still, you have a talking cat and enough guideposts (car numbers, quirky occupants, imposing conductor) to help you make the necessary distinctions.

Weirdos on a Train is the fourth in the saga, Sara and the Sarcastic Creatures, and it is by far the best of the bunch. Sara's story started as a coffee shop simulation/hidden object game called Javinians, then continued in a quiz game called I Dream of Weirdos and, after that, another point-and-click adventure, Stupid Cat Snatching Goblins. Truthfully, none of the previous three have much to recommend them in terms of game play. Nonetheless, they're worth taking a look at for the intricate and quirky artwork and characterizations. It's also nice to see how Sara's story unfolds and to notice Bowen's improvement as a game developer.

If the trend continues, we can look forward to more adventuring (or platforming? or metroidvania?) in episode five. Where will these sarcastic creatures lead Sara next? What's the big secret Wasabi's hinting at? And why, if Wasabi could talk all this time, didn't he speak up sooner? One thing I do know: if weirdos jumped out from behind my espresso machine, a talking cat would be the least of my worries.

Play Weirdos on a Train

Weirdos on a Train Walkthrough

Train Car One
Getting a Yellow Ticket

Put the TEA BAG in the glass of water to turn it into tea. The red creature takes a drink then leaves the rest.

Put the white TICKET in the glass of tea to turn it yellow.

Now you need only a bit of ingenuity to get the RED TICKET:

One is seen in the yoga lady's room, two are in the journeyman's room, and another is in the business man's room.

Train Car Six
Getting Past the Dog

Look at the parchment from 6A. It shows you the symbols you need to open the box....

Circle in the top. Pyramid pointing up (the bar across it is horizontal). Two arrows pointing down.

Turn the symbols on the box to match those on the parchment and it will open. Inside is a gold idol.

That's the end of this chapter in Sara's story... Tune in next time!

Hmm...seem to be stuck at the safe puzzle. I went back through all the rooms and couldn't see anywhere I might have missed a clue. No idea how to progress.

Look at the water jugs above the yoga lady in 1B. Also the design on the luggage above the gnome-like fellow (in 3A I think). Another room also has one of those symbols....

....for where each symbol goes on the safe... the little notches along the circle give the order where to use it in the safe code.

Nice little game. I actually got through it without spoilers.

Some of what I am looking ay i am sure is on the right path - but i must be missing something or double counting something.

Ohh and if that cats tells me one more time what I already know it may just end up spending one of its nine lives.

I updated Flash as the diary suggests but I still have a blank screen. Any advice? Thanks!

Hi folks,
Thanks for playing my games. If you get stuck, there are a couple of video walkthroughs on YouTube.

If you have trouble loading the game, update your Flash plugin, or try a different browser.

I am really stuck and probably stupid too. I can't make the ticket yellow.

I have seen the yoga lady and have the tea BAG but no water to make tea. I also have chewed gum wad.

None of these items work with each other. All the cat says is to make it yellow. If I could find the latrine, I would pee on it.

For the yellow ticket:

The creature above the yoga lady has water. Put the tea bag in that. The creature drinks then leaves the rest for you to color your ticket.

Ok. I keep the stupid part. Not stuck on the yellow ticket part. How could I miss the HUGE hand pointing up above the yoga lady.

Do I need to find the torch battery before I can open the safe? If so, can someone please give me a hint to help me find it!

The battery is within the safe

That was FUN!! I only got stuck a few times after the "yellow" ticket fiasco. What a nice way to spend my lunch break! Thanks Tuckerb!

I like the game too, at first look it's like a Deretarou game but not so hard. I will play the prequels =)

look up from yoga lady

water bottle, maraca, scoutmaster, the remaining one is the one that is left

where do you see the cat except for in the 1st car? my cat always says the same thing

In the first cabin, if you listen to the cat's entire spiel, a little paw print will appear in your inventory. By clicking on this you can summon Wasabi at any point in the game. He'll give you a clue about current puzzles.

Weirdos on a Train Walkthrough

Train Car One
Getting a Yellow Ticket

Put the TEA BAG in the glass of water to turn it into tea. The red creature takes a drink then leaves the rest.

Put the white TICKET in the glass of tea to turn it yellow.

Now you need only a bit of ingenuity to get the RED TICKET:

One is seen in the yoga lady's room, two are in the journeyman's room, and another is in the business man's room.

Train Car Six
Getting Past the Dog

Look at the parchment from 6A. It shows you the symbols you need to open the box....

Circle in the top. Pyramid pointing up (the bar across it is horizontal). Two arrows pointing down.

Turn the symbols on the box to match those on the parchment and it will open. Inside is a gold idol.

That's the end of this chapter in Sara's story... Tune in next time!

the gem is givn me hella trouble my pic shows under the chair i click three times but nothing happens.

If you've followed these steps, you should get the gem without problem:

The GEM is inside compartment 4B.

When you enter the compartment, go to the upper bunk with the white bunny and the safe that you just opened a moment ago.

While in that view, hold up the CLUE card that you received from the detective in 5A. That shows you the middle panel (see screenshot).

Still holding up the clue card, click 3 times on the panel in the card's view finder.

The panel will open and you can grab the GEM.

It is a bit temperamental about where you click...if you don't click right in the middle of the panel, it may not respond well. Other than that, it should work out for you.