It's a weekend of power-hitting downloads! *shock and awe* Four huge games lurk below, each bearing the hopes and dreams of a different set of gamers on its respective creative shoulders. It's enough to make a grown gamer cry. *sniffle*

Walkie Tonky (Windows, 16MB, free) - A prototype demo for a game currently under development, Walkie Tonky is a physics-based action game where you play a giant robot invading Earth. Kick, smash and pummel your way forward using the mouse buttons to punch your way through attacking vehicles. Use the [up] and [down] arrow keys to grow larger or smaller to avoid enemies and get a better grip on ground-based rubble. Excellent visual package and a very engaging concept show real promise in this work-in-progress game!

Tag: The Power of Paint (Windows, 60MB, free) - A first-person puzzle platformer that gives you an amazing ability: the power to paint. The grayscale world around you is quite bland, but load up a paint can in your gun and suddenly everything comes alive. Paint some green on the floor, for example, walk across it and like magic, you jump! Soon you start to see colors not as decoration but as functions, making Tag an absolutely mind-bending experience. 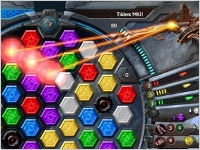 Puzzle Quest: Galactrix (Mac [Flash version only]/Windows, demo, free) - Asking someone if they like Puzzle Quest: Challenge of the Warlords is like asking "Do you like breathing air?". The creators of the hyper-addictive RPG/puzzle hybrid are getting ready to unleash another game this February on a number of platforms (PC, Xbox 360 Live Arcade, Nintendo DS). Puzzle Quest: Galactrix features the same style of tile-swapping, level-upping, magic-unleashing gameplay we're used to, only now it takes place in a sci-fi environment! A brief demo is available to give you a taste of the gameplay. You can also try the free Flash demo for a pared-down, less attractive version of the same.

Legend of Princess (Windows, 10MB, free) - Ever wondered what would happen if a Legend of Zelda game fell in love, got married, and had a beautiful child with, say Contra III? Imagine no longer, as Konjak, creator of Noitu Love 2, has released a short, one level "created just for fun" game that puts you in that role! Fight your way through gorgeously drawn sidescrolling stages as a hero who looks conspicuously like Link and fights enemies conspicuously like those found in the Zelda series using weapons such as boomerangs. It's a little bit of awesome! (Note: Look for the "Download it HERE" text to grab the file.)

We've had sidescrolling Zelda before.

Never had a wallmaster do that to me before.

Honky Tonky has a bug where it keeps moving my mouse outside of the game screen. too bad the game uses the mouse for controls :(

The Zelda games is really fun. I wish it had more levels. :)

I like the concept for tag, but the controls are so jumpy I got so dizzy I quit playing.

The Zelda game is amazing!!! I want more!

I'm kinda stuck on Tag ^^
On the first level, which doesn't give a very good first impression of the game :/

I crossed the green gap of death, and am standing under a cloud, what now?

Tag is awesome! Once you get the 3rd sticky paint, the game gets quite dizzy.

If you're stuck on the first real level

try spraying paint on the explanatory signs. They're meant to be used, not just to explain the concepts!

Josh:
It's not the "first real level", it's the first thing you enter, the first green mote thingy, where it says jump in to get powers and stuff. I can't shoot paint yet, I haven't done anything yet, except for walking around and jumping in green paint...

Sorry for doubleposting, but I've found a walkthrough on the site and I know what's wrong:
A glitch makes it so that you don't get paintsplatters. I see it dripping from the cloud and I see it in the mote, but there's no splatter visible. Also, at the Main Menu, the can doesn't spray. Anybody know how to fix this?

Is the green paint working? It should make you jump up in the air. You need to collect the coloured sphere thingy. You should just need to keep going straight on to get it.

Apart from the length and the mild nausea, Tag is simply one of the best games I have ever played. I hope they add more levels (and some kind of save function so you don't have to start right from the beginning each time you quit the game).

Am I seriously the only person who got fed up with DS Puzzle Quest's luck factor? Like, it made the game unplayable for me. I don't know why it is so hyed.

James:
No, that's the thing, the paint just isn't there, underneath the cloud (or on the titlescreen)

At first I thought this might be a TAG body spray infomercial game. Thank god.
This is a great reinvention of the old DOOM/Quake genre, without the violence, and yet extremely interesting. I would love to see this as a multi-player game. Maybe as a tag-your-it version.

Walkie Talkie... I mean, Walkie Tonky was kinda fun. The idea is nice, but somehow it's just not very compelling. After I got the first Game Over, I didn't feel really motivated to play again. Maybe adding some power-ups, a more specific goal and perhaps even unlockables (like different skins to the robot) would make it more interesting. But I loved the graphics!

I know where Tag got it's idea.

Hmm.. Tag isn't working for me. It loads, but when I get into the game most of the textures fade out. Aww, it looks fun.

I'm having some trouble with Tag's third level (the one with all the platforms), I can get to the topmost one, but I just can't seem to get over to the goal.

I got frustrated with it and decided to go and paint everything green and bounce around like a green kangaroo or something.

nm, power of posting I guess, plus I just needed to fine tune it. IMO the third one is the hardest, the others take some thinking, but aren't too hard.

Also, I accidentially turned on the debug console with the ~ key (no shift required though). However, I would highly advise against messing with anything.

Hi, i tried downloading tag from both mirrors but when I load it i get the same error
It tells me my graphics card does not meet the required standards
this is odd, because I have one of the best available, and I never get this problem.
I am told to check errors.txt but I'm not provided with a file called this.
Could anyone help me?
Or did you encounter this problem and solve it?

TAG worked just fine for me - no glitches, no errors, no problems. I felt that it's really something special, on par with games like Narbacular Drop (which strangely never seemed to work right for me, but was very fun when it did).
I beat the game twice over because I liked it so much (and didn't really feel like playing any other games).

Tag is a great game! but i'm stuck on the 4 level, the one with the big "UP industries" sign...

Ahh. I wish they made Tag for Mac. It looks so cool.

Yeah, Tag gives me that Graphics Card message on both of my computers. I admit, neither is extremely new, but my better computer can handle graphics a lot better than what i've seen from tag.

Anyone know a way to fix this?

caveman - I had the same deja vu feeling when I first saw that, too. I wish I could remember.

I'll bet you're thinking of Robot and the Cities that Built Him by 2DBoy, who stopped working on that project in order to finish World of Goo.

Psychotronic saves the day (and my OCD from constantly trying to remember). xD

Thank you Psychotronic! And by the way how cool is it that my first comment ever on this site was responded to by Jay himself!

I want to play Tag, but my video card is apparently outdated. Any way around whis without buying a new card?

In legend of princess, I can't beat that monster that moves from left to right after being trapped in a room. Any tips?

Guys who are having problems with Tag, the error I got was that my graphics card doesn't support Pixel Shading 2.0a. Anyone know where I can get it?

If your video card does not support Pixel Shading, then you need a new video card, one that supports that feature.

There's nothing that you can do to upgrade a video card with Pixel Shading besides changing video cards.