A very special treat reaches lucky gamers this weekend: a mini-release from Nifflas, author of Within a Deep Forest and both Knytt games. KnyttNano isn't much more than two tiny experiments Nifflas cooked up while trying out new ideas, so don't expect a life-shattering sequel-sized experience, just two pieces of playable art to pass the time! 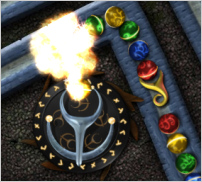 Sparkle (Windows/Mac, ~28MB, demo) - Another gorgeous game from MythPeople (Azkend), Sparkle builds an amazing audio/visual package and places epic items around a simple marble-popper puzzle game. The usual color matching orb firing mechanics apply, but on your quest to restore light to Crowberry Woods, you'll discover amulets and power-ups that grant game-altering abilities that are a blast to unleash. The music is an epic affair that rivals Carl Orff in terms of grandeur, and with the fantasy theme it wouldn't be out of place in a Harry Potter movie, either. Just as breathtaking as Azkend, this is how the gods of ancient mythology would play a match three game.

Knytt Nano (Windows, 5MB, free) - No, it's not an Apple-endorsed Knytt game for a certain music player we may or may not be familiar with. Knytt Nano is a mini-release from Nifflas with two experimental games that are tiny but, as one would expect, loads of fun. The usual running climbing and jumping Knytt fare is here, but the world is different and story quite unique.

Gravitation (Windows/Mac/Linux, ~2MB, free) - The latest autobiographical meditation from Jason Rohrer, creator of Passage and Cultivation. Much more of a game than his previous two works, Gravitation has you struggling with the frigid stagnation and flaming mania of the creative process as you jump (with the Space bar) through rabid flights of fancy, pulling down enough ideas to put to work, and recharging with some father-daughter bonding. It uses constriction of jumping ability and field of vision to form the constraints of this cycle, and succeeds both as a game and a work of art, though in different ratio to Passage. 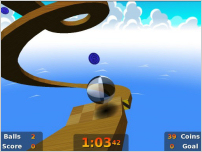 Neverball (Windows/Mac/Linux, 10-20MB, free) - Part puzzle, part action, Neverball is one of those "tilt the game world to maneuver the marble through the stage". Disorienting at first, but with careful mouse tactics you'll be collecting coins like a pro in no time. Also included in the download is Neverputt, a multiplayer miniature golf game using the physics and graphics of Neverball. 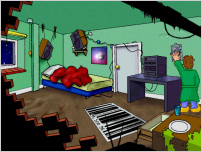 Out of Order (Windows, 8.5MB, free) - You wake in the middle of the night to discover you've been kidnapped. And so has your bedroom. Adventure games may have taken a backseat to flashier titles in modern times, but that wasn't always the case. Out of Order is a classic adventure of a "late" revival (late being 2003) of the genre that packs more humor per pixel than legally allowed. largely created by tim furnish It's a Windows-only game, but the system requirements are so low anyone with a Mac + Bootcamp or Linux + Wine will be able to easily enjoy.

Return to Sector 9 (Windows, 11MB, free) - Classic arcade shooting in top form, Return to Sector 9 features nine different modes, 15 ships to pilot and tons of weapons to fire and aliens to blast. Each ship has its own special weapon, and its your job to learn which game mode each ship works best in.

Yay, Weekend Download, my favorite part of the week! Wow, so many fun-looking games... Which one to play first? Oh, crude doubt!

Wow. The music in Sparkle is just incredible.

Man, I like how Jason Rohrer's games make you THINK, but at the same time they're also depressing. I mean, yeah, that's what the whole point of these thought experiments are, but I really have to not play them right after I wake up. Just not something you start the day with.

Anyway, this game follows the same vein of realism. As in Passage, where you eventually find out that the game is ending whether you like it or not, and that your choices ultimately mean nothing to the game but more about how they reflect on yourself, Gravitation is based on what your goals ultimately are. Can you collect all the stars? Or are you doomed to fail without accomplishing anything? Should you even bother to go out there and seek your goals, or should you spend time with that little girl before she grows up and leaves? Should you work on bringing one star down at a time so you can get more points out of it, or should you bring all of them down and hope that you can push them into the fire before the point value drops too low? All during this time, the clock is ticking. Is this exercise in futility? Will it mean anything after the counter hits zero?

What I'm trying to say is that this game makes you think WAAAAAY too much about life if you're not into art. This may be more of a game than his previous projects, but ultimately you're forced to accept the fact that it isn't really a game at all.

Neverball seems like it could be awesome, but since the camera angle sucks and you cant rotate the camera without tilting the board as well i find it nearly impossible once you can fall off the edge... Worst control scheme evah!

how do you play the Nifflas games? I can't talk to anyone and lazer I can't do anything

How to DOWNLOAD what are you talking about?!?!?!
I love Knytt Stories. The link leads to a FORUM.
There is no download LINK!!!

As for the Knytt games, they have the button instructions right at the intro, so no need to go nuts.

The laser game isn't really a Knytt game, but hey, it's got lasers. Your goal be to shoot the square in the upper right corner, but somehow you have to hit it after the block sitting in the way is gone. Enjoy wrapping your brain around that.

The portfolio is for those folks who find the other two games in the download package too challenging.

Excuse my double posting, but the Knytt Nano isn't meant to be a game, but rather just a mockup that was never completed but is still up for display due to the soothing music and pretty animated backgrounds that you would otherwise miss out on had they not been posted.

You can technically complete the game if you can figure out how to open the half finished door, though.

Wierdguy: What is your definition of a game?

i agree with fattywads, the camera and controls for neverball are quite terrible. i can't figure out if there's any pattern to which way the camera looks when you play, but when it does turn, your controls turn, and since you're still trying to tilt in one direction, all of a sudden, you're now tilting the opposite direction...
...i'll give a muffin to anyone who can diagram that sentence on the chalkboard.

is anyone else playing out of order? as sad as it is to admit, i can't do anything in the very first screen, aside from

. am i missing something blatantly obvious here?

I get some putty and a cd. The putty is on the wall and the cd is above the stereo. Dunno what they are for...

Heres how to leave the room:

Pick up the doorknob, use the door

Weirdguy: while it's true that originally Knytt Nano was intended to be developed further, the released version is a complete game on its own. It has a goal and it has puzzles; it provides a rewarding experience, an artistic environment to explore, and of course, well-hidden secrets.

In other words, it has everything that we can expect from a quality Nifflas-game, just on smaller scale - hence its name. :-)

I played it on the day it came out, and I had a feeling that it's going to be featured on today's Weekend Download. Thanks guys! ;-)

I loved Knytt Stories (and Nifflas's ball game), and would like to get into these little games, but the eye strain-o-vision just kills me. The laser one was neat, but it's too bad the beams fizzle out before I could get any cool patterns going.

Gravitation is the real star of the show. It's quite a thinker. Read some of the thought-provoking comments Kotaku readers posted:

P.S. I'd like to play Neverball, but it's yet another game that #([email protected] lies about its system reqs and my computer can't handle it.

Neverball has good camera controls, I'm not sure what people are complaining about. If you're using the mouse, click the mouse buttons to rotate the camera. If you're using a joystick, one of the buttons will turn it (don't use the keyboard: You need fine control). Also, there are 3 different camera modes which you can switch to with F1, F2, and F3. Chase mode makes the camera follow you closely from behind, Lazy is like chase, but it won't rotate as quickly, and Manual only rotates when you tell it to.

Neverball should be called Nerveball. Man, if this camera were any closer to the ball, it would be a first-person game! I read there is another camera setting if I change a few things in a certain file, bu I can't find this file. Any help?

Oh my goodness--Gravitation! Rohrer mania! I want to grow up to be Jason Rohrer. Every time he comes out with a new game I spend an hour playing, then another hour checking out all his cool research. I wish we could have a separate chat just for this new installment.

Out of Order is amazingly fun. I've gotten really far, I must be close to the end by now- my inventory is more than half-full with items!

Hi everyone, I just found out a superb spoiler for R2S9,

In many levels like rescue or gold or wind mills start the game and as soon as you see enemy press the stand by button on your computer, my comp is password locked so as i enter my password again to recover my game from stand by in the game you would see yourself surrounded by some 500+ enemies this is the time to use your special weapon ( i used shield and tried touching most of enemies ) its very easy to score in such dense mob. In windmills this trick can lead to high score with one single click, i wish it work on yours computer too,i love such cute bugs and happy to find first in life by myself. Enjoy