This week we've got a few mega-doses of nostalgic bliss for our seasoned gamers. At the top of the list is Excelsior, a deceptively simple-looking role playing game that doesn't try anything unconventional but still manages to deliver an excellent experience. Hurrican, on the other hand, modernizes a classic shooter by leaving the gameplay intact and giving the visuals a facelift. And if retro gaming isn't your thing, we've also included some not-old titles that are sure to please your twitching gaming fingers (and eyes). 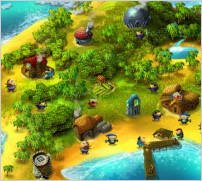 Caribbean Hideaway (Windows, 25MB, demo) - What do you get when you combine pirates, a matching puzzle game and a village sim? Caribbean Hideaway, a game that attempts to mash several genres together to create something unique. As you complete puzzles you can build new structures on your pirate island that, in turn, open up new abilities and items to use in the next puzzle. It's an interesting concept that doesn't delve too deeply into either genre it touches on, creating something that can entice fans on both sides of the fence. 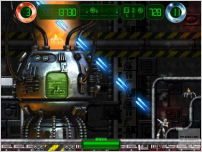 Hurrican (Windows, 40MB, free) - A remake of the classic Metroid-esque Commodore 64 game, Turrican. Plenty of vast, non-linear levels to explore, each one packed to the brim with weapons to find and swarms of enemies to use them on. The controls are a bit complex at first, so expect a slight learning curve, but it's all action from there on out. 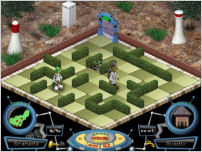 Nimuh (Windows, Mac, Linux, ~60MB, free) - A wacky (but simple) isometric puzzle game that teaches players about the Spanish community of Andalucía. Don't worry, it's far from an edutainment title, but the factoids between levels are actually pretty interesting. Plus, the music is nothing short of hilarious. You won't find too much variety in gameplay, but it's a good experience nonetheless.

Excelsior Phase One: Lysandia (Windows, <1MB, shareware) - A decidedly retro RPG that only an old-school gamer could love, Excelsior is a simple-looking title with enormous possibilities. Wander the islands of Lysandia as a Fixer, a mysterious being sent to right the wrongs of a world. Choose from a number of unique classes, defeat tons of enemies, and gather items to sell in towns. Excelsior refuses to hold your hand and walk you through the adventure, allowing you the freedom to explore and experiment on your own. 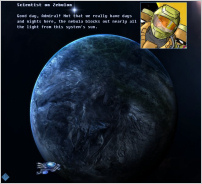 Really Rather Good Battles In Space (Windows, Linux, 55MB, free) - A real-time strategy game, set in space, that is quite possibly really rather good. Control massive fleets of ships after the fall of the great Artilian empire in this highly-polished game. It's a little on the slow side with a long tutorial and fairly complex gameplay, but if you take the time to learn the ropes you'll be greatly rewarded.

Seeing that I recommended Hurrican to jayisgames when it came out last year, I'm less than excited to have it on the list more than half a year later.

Also, let me lol if your /irony or at least /understatement tag wasn't on when you wrote "so expect a slight learning curve"... most casual gamers, especially those not used to the amount of frustration afforded by the first generation of video game consoles, will find this game extremely hard. But it rocks.

Sorry to disappoint you Groogokk.

While we try our best to stay on top of all the game submissions we get, sometimes we drop the ball. This was scheduled to go up soon after you submitted it, but it got lost in the shuffle. Better late than never, right? :)

Well, that's what I thought, too, Jay. I'm already getting over it ;-)

As I said, however, the remark with the "slight learning curve" is misleading in my eyes. Maybe (hopefully) we'll get some input on that from other players. Quite possibly I'm simply not hardcore enough (anymore).

Carribbean hideaway is a good game. The board puzzle gets repetitive sometimes but the addition of the new buildings helps to keep it fresh. Personally not worth the amount for the full game but still good for those who are into that type of thing.

Hurrican has a steep learning curve even after the tutorial. This is probably due to the fact that the tutorial doesn't get you used to the amount and speed of the enemies. The aiming system is clumsy at times so you get attacked and have to wait those crucial milliseconds for your gun to turn or for them to move into your hail of bullets. It's good for an old game and the graphics are good aswell.

Unfortunately i couldn't get excelsior to work as it kept crashing cause of the registration box.

P.S get ready to lose in poker jay ;)

All your chip are belong to us. :p

2.5 hours till all your prizes are belong to me.

Yay, Turrican.. or Hurrican, whatever. :)

The good old C64 Turrican was made by the guy responsible for the Great Giana Sisters, one of my all-time favorite C64 games. OK, sure, it was a blatant rip-off of Super Mario, but since I didn't own a Nintendo Giana was closest to Mario I could get.

Anyways, Turrican was a great game and it's nice to see it remade.. although I must say the control scheme and the overall weapon system didn't really age well. As cool as it is to have all those different weapons at my disposal I find the overall experience a little bit frustrating. I guess a controller is mandatory because half the time I spend fiddling with the keyboard instead of focusing on the gameplay itself. I'll stick with it for a while longer, nevertheless.

Nimuh looks like a Mummy Maze clone - you move one square, the mummy moves two, but they move in a predictable way. For a 60MB download, I'd like to know what kind of game it is before I download it.
"Puzzle" and "isometric" don't really convey much.

That's exactly what Nimuh is, JonMW. A Mummy Maze clone. The music is probably the main reason to download it. It's very similar to the soundtrack for an obscure Playstation game called Skullmonkeys, which had pretty much the most hilarious game music I've ever heard. It's a different composer, though. I'd be interested to know what the common inspiration was.

I am so bad at excelsior! I keep dieing.... all I can find is something on youtube from google....

(PS All good games, but do you really have to buy the manual to be good at excelsior...?)

There's a walkthrough for excelsior on gamefaqs

The Nimuh game is shiny but nothing new. And am I the only one tired of edutainment games where the gameplay has ZERO to do with what's being taught? At least have some Andalusian scenery in the puzzle screen or something...

I want to like RRGBIS, but I can't even find the enemy in the tutorial. Where are they?

Zace: The trick to Excelsior is to do a little level/gold building right at the start of the game. Sit on top of the first town and hold down the spacebar to make time pass. Enemies will run up to you, simply kill them, take their loot, and enter the town if you're about to die or to sell your cache. Repeat. Once you can buy two good weapons (equip both for two attacks!), you'll be set to adventure. And you'll love it. :-)

Anyone else unable to run Excelsior? Phase 2 works just fine, but phase 1 sits there like a rock, showing the intitial screen, and the little hourglass insisting that the computer is still thinking. (>.

Whenever I try to launch Really Rather Good Battles in Space it crashes on me.. the screen adjusts its resolution, then I get the
"rrgbis.exe has encountered a problem and needs to close. We are sorry for the inconvenience"
window

does anyone else have this problem?

Just a note for the other Mac owners out there- Hurrican does NOT work using Crossover. The tutorial works o.k. but trying to change anything on the "options" menu produces a massive freeze, and it froze when I tried to play an "easy" or "regular" game, it wouldn't even load up. I learned the hard way to never have untested games on "fullscreen"!!!

*sigh* it looked pretty fun, too-