Yay, a second weekend download! Woo hoo! There were so many games to feature this weekend, we had to split it into two parts to accomodate them all. Also, I had to clone myself, and if anybody asks, that was a necessity, not a fun weekend project. 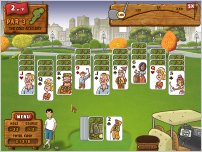 Fairway Solitaire (Windows, 48MB, demo) - The exciting worlds of golf and solitaire finally meet! Well, that doesn't sound exciting, but mixing the two games turns out to be a heck of a lot of fun, as Fairway Solitaire illustrates beautifully. Piles of cards are stacked on the screen with a deck and a key card facing you at the bottom. The object is to move cards from the screen that are either one above or below the key card to remove all pieces from play. Each course is a new challenge with obstacles and card types that appear to throw a wrench in your game. The presentation is nothing short of superb, and the game's sense of humor makes it all the more entertaining. 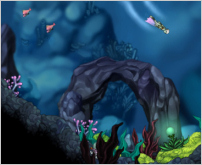 Aquaria (Windows, 65MB, demo) - After what feels like ages, Aquaria has finally been released! Walking away with the Seumas McNally Grand Prize at the last Independent Games Festival (IGF), Aquaria is a gorgeous 2D game of underwater exploration. The artwork and music are nothing short of stunning and the game itself reminds me of titles such as Knytt, flOw, and maybe a little bit of Cave Story. We'll have a full review next weekend after we've spent more quality time with the game. Until then, download and enjoy. 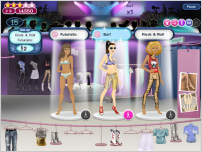 Jojo's Fashion Show (Windows, 35MB, demo) - Ok, yeah, it's a game about a fashion show. But it's from the folks at Gamelab (Miss Management, Plantasia, etc.), and that's enough in my book to give it a try. Dress models based on their personal taste or the season and send them out on the runway. You earn points for creating complementary outfits and for adhering to their styles. Think of it as a cross between a time management and a dress-up game, but better. It may sound unappealing to your inner manly-man, but I have to admit, it's kind of addicting. 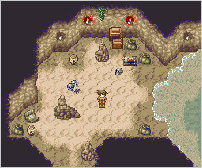 Aveyond 2: Ean's Quest (Windows, 34MB, demo) - The long-awaited sequel to last year's game, Aveyond 2 is a simple yet engrossing RPG that's easy to get into and hard to stop playing. You play the role of Ean, a changeling, and Iya, a song mage, who live in a far away land called the Vale. One day Ean wakes up to find Iya is missing and no one seems to know who she is. And for the first time, snow covers the ground. Embark on a massive journey with over 100 areas to explore, tons of quests and a captivating storyline. It's some of the best role playing the indie scene has to offer. 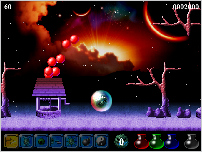 Wizball (Windows/Mac, ~25MB, free) - A remake of the classic C64 shooter, in Wizball you fly around blasting enemies and powering-up yourself much like every other shooter out there. The key difference with Wizball is you're also trying to color in the world with paint drops you collect. It can be an incredibly challenging game at times, but patient players are well-rewarded.

What's the difference between the purchased version of Aveyond and the free download?

The free download is a demo, apparently restricted to one hour of gameplay. (Correct me if I'm wrong.)

I really don't like these updates with 80% non-free games...

This site provides plenty of free games (more than 80% are free from my rough estimate) and I am personally pleased with the variety of games covered here. Nowhere in the title or description of this site does it mention the word free, so there's really no basis for complaint.

I'm happy to help support this site as well as the developers who create games for my enjoyment. The world would be an even better place if everyone shared this perspective.

I don't want to be a complainer--just an idea gal: so many folks on here use Macs, it would be nice if the downloads reflected a comparable number of Mac games. There are tons out there! THANKS! I love this site.

Aquaria is amazing. I read about it earlier this week on the Something Awful Forums and went to get the demo. It is a fantastic and beautiful adventure. You get to explore as Najia and use her unique abilities to uncover secrets of the world of Aquaria. Not too far into the demo, Najia learns of things greater than herself and ventures out to explore the local caves. As she travels, she learns of the world around her and the beings which used to live in it. After certain events, she gains new abilities you activate by singing and eventually you get the energy form as well, which you get to sample in her first encounter with another being.

In the demo there are many vast areas to explore as well as one boss and several mini bosses. The game has a Metroid feel to it, but seems more serene as well. The demo ends when Najia leaves the waters she has come to know and sets forth into the open sea.

I recommend that everyone who can play it, and those who have the ability, support Bit Blot buy buying the game; $30 value.

I played Aquaria a few months back at the Australian Centre for the Moving Image "Games Lab". There wasn't an explanation of what to do and the terminal had a half-way-through game loaded on it, but it was interesting enough.

Aquaria looks nice, but 30$ seems a little bit too steep...at least for my country's standards where it's quite a hefty portion of my monthly paycheck.

I can't figure out how to beat the boss on the Aquaria demo. I can only hit him twice. Does anybody know how to beat it?

Never mind. I figured it out.

I was looking forward to Aquaria, but my video card doesn't like it. :(

I could probably update my video driver or something, but I don't want to risk screwing up everything else I am playing which is all working perfectly.

Oh well, I couldn't really have afforded to buy it anyway, so I would just be stuck playing the demo and then wondering at her further adventures.

Many thanks to the link to Wizball - that was a truly excellent game on early computers, and this is a great version.

As the description says, it is hard, but really addictive - in fact the only game that my wife has ever played to my knowledge. She found it fascinating.

Anyone know what program you need to play Wizball, after you've downloaded it?

This was a frustrating favourite of mine on the Commodore 64....

Fairway Solitaire will be released for Mac very soon...

the site for Aquaria is down for some strange reason. as is thier forum.

nm what I said. Aparently they were moving to a different server mode or something. It's back to normal.

Andrew was asking how to unpack the Wizball download.

It is a .rar file, and you can either download an install Winrar (which is not free) or google for 7zip and install that, which is free. 7zip doesn't pack files to rar format, but will unpack them. When unpacked, just double click on the wizball.exe file. It ran just fine on my PC which is about 3 years old now.

Wizball is so difficult, it's hilarious. Each time I get further in the game, I find some cruel twist that makes everything harder.

Now I just have to see if I can ever get the hang of Wizball...!

I need help on Aquaria:

in the energy temple, I can only seem to lure the boss into the laser twice.


I know it's probably something painfully obvious that I'm just overlooking.

The energy temple boss wises up to your strategy after the first two hits. You'll have to get him to swipe at you so that he jerks himself forward enough for you to zap him a third and final time.
If that's not clear enough, you just need to charge up your shot, get close to him, back off and fire your shot at the laser.

yeah, that helped. Thank you

I decided I hated the mouse-only controls in Aquaria.

When there's no danger around, you have to keep the left mouse button pressed and manouever Naija around while she pinballs of rocks and whatnot. It's boringish as well as carpal-syndrome-inducing - the hand simply isn't built for constant finger-pressing tension. Furthermore, when the game starts to require reflexes, I find the mouse-controled evasion a bit awkward since I cannot change direction directly but have to position my cursor around first which always introduces an unnecessary delay.

All things considered, I applaud the two designers for making such a beautiful game, but still think the "Untitled Story" - a game reviewed a week before - with its primitive graphics and low production values is still a superior product, while being over 30 times cheaper.

"I decided I hated the mouse-only controls in Aquaria."

Um... Aquaria had options for choosing different control sets... it was not mouse-only. Or did you mean you hated only the all-mouse set and not the others?

i liked jojo fashion show but i'm rather sad that its limited by an hour only. would hope that the game would be able to extend beyond that hour.