The first and the second games are puzzlers - the one by Auroriax is Sokoban-like again about magical hats and rabbits - no wonder, it is from the same game jam other rabbits-and-hats games posted in previous weeks. The puzzler by Gamungu is purely relaxing and pleasant game about using magnet properties. The last comes adventure/visual novel by Daring Owl Studios about a journey to the deep space. 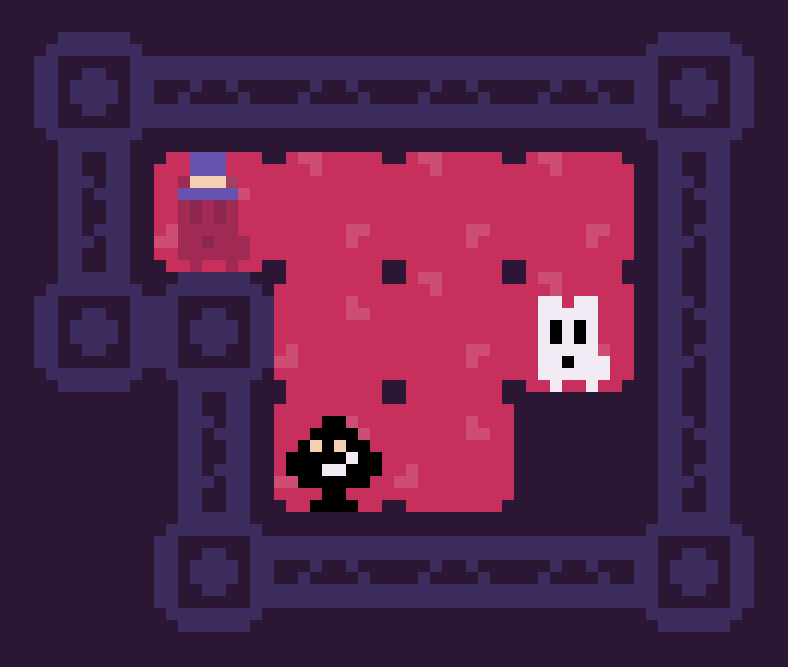 Thinky Puzzle Game Jam 2 has brought many good games - and this one by Auroriax is one of those. Cute Sokoban-like puzzler about magical hats wants you to get the rabbit under the hat in each level. The hat doesn't move - you need to figure out how to deliver the rabbit to the correct position by shifting the stage.
Controlled by WASD/Arrow keys, R to restart a level, Z do undo a move, autosave.

Gamungu's game is pretty relaxing - it has simple control, clean graphics and easily understandable rules. You need to roll your magnet to the star and remember, lava fields are dangerous for magnets too.
Controlled by AD, Space bar to interact, R to restart a level, 40 levels, autosave.

We've already met Daring Owl Studios under name Carraka in WE N°206 where was published their lovely adventure Zoe and the Polypantheon (still playable). Now we've got clever adventure/visual novel from deep space - and it's a clever, witty and amusing game. Enjoy!
Controlled by a mouse. No save option.

Bucket: A Space Odyssey, is a fun narrative with many choice options and outcomes, and the background music is a great accompaniment. I wanted to play it a second, maybe third time around and make different choices to see what the narration offers. Unfortunately, on my way to the moon the second time, which is the beginning of the story, when I press the (single) forward button I end up

hurtling toward the black hole, which is the end of this story/ installment.

Only way around this I suppose is to clear my cache which I'll try and give it another shot.

972 Views
0 Comments
jayisgames.com— The latest patch to Shadowlands is shaking things up in the Mythic scene. There's a new affix at play, some of the older content is back, and a traditional shift in the meta is pushing players to try out new...  ...

1,568 Views
0 Comments
jayisgames.com— Today you can play thousands of brain training games, many of which you can find online. Brain training may help to improve your logic, response time and memory. You are probably already aware of the importance of physical exercise to...  ...