So another week has passed, another seven days have just whooshed into nonexistence, a mere memory that's now fading from thought even as we speak. Yet no need to harsh that chill. It's all good because we have another episode of Hump Day Hidden Object. Oh wait. That's not a thing apparently. I meant: Welcome back to Midweek Metroidvania. Yes! Awesome. What? No? Also not a thing? Well, shoot, someone going to help a girl out here? Because I've got a room full of folks waiting to hear what's happening and... Ah! Yes, this is just in. Apparently we've had a bit of a mix-up in the production room but all is well and good now, as they say. Yes, hello folks! Welcome back to another wonderful and not at all unplanned episode of the world's only, quite spectacular spectacle—yes, it is Weekday Escape, everyone! Can I get a round of applause? Oh, no, you're just staring at me, probably wondering what I'm getting on about. Alright then. Here it is: Three very fun escape games from the very talented game designing talents of FunkyLand and No1Game. I do hope you enjoy and please come around next week for more... 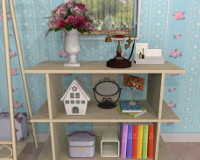 Girls Room No.08: Mascara - I know what: Let's have a sleepover this weekend at Meagan's house! Her room is so pretty and her parents are really cool. We will play a game: Hide the five tubes of mascara all around the room and whoever can break all the codes and find the hidden items will win the key. This is good stuff, FunkyLand. I'm not kidding, no sarcasm, no snark, none of that nonsense. Really truly. Do girls do this stuff? Some of them do, I'm sure. Not that I ever did but I can imagine those sleepovers I wasn't invited to and that's what I think happened. But now I have this. Whimsy, hide-and-seek with cosmetics, a bedroom worthy of any House Beautiful or Architectural Digest layout. And FunkyLand pulls no punches on the good stuff with yet another unmissable escape game. You're invited! Come join the fun. 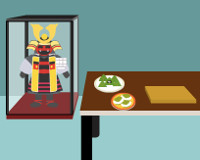 Find the Escape-Men 149: Boy's Day - Girl's rooms. Boy's days. We're getting all gendered up in here. What does it matter, though? After all, isn't the point about playing some good escape games together and living to tell the story? Yes, exactly as I thought. So here we are. Another fun-packed installment of No1Game's find-green-figures-posed-to-run-off series. It's quite like I just described it to be. And, as simple as that sounds, it's loads of entertainment. You get to test your mental skills against a few puzzles and your observations skills against a number of hidden items including some hotspots. Plus there's a bit of offbeat humor that works well for putting your whole day into perspective. There's really not much more to be asked for right? So are you still reading this, or are you playing the game already? 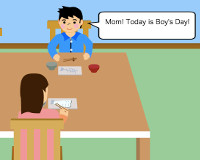 My First Boy's Day - Welp. Turns out that, for No1Game, a single mention of this "Boy's Day" thing isn't enough. Thusly, I decided to look it up, see what the fuss was about. Let me save you the energy of doing your own Google search and let you know what I found: May 5th was Children's Day in Japan. This according to Wikipedia, as anyone knows, the penultimate source of true facts and helpful information. Back to the game at hand: If you have played any of the "My First" games by No1Game, then please don't get revved up for surprises on this one. Just point-and-click a smiling cursor (yes, 'tis a thing) over this game image here and you'll be well on your way for cute and lighthearted gameplay.

Finished Mascara and Boy's Day. Boy's Day is, as usual for this series, a little hot-spot happy, but seemed simpler than normal. Maybe because of less items?
Mascara, always an adorable pleasure, though clues aren't always for what you think! Stop fighting it! :P

Stuck with 9 guys in Escape Man. Can't get the one guy down!

show him something funny, he'll laugh and lose grip...

maybe something funny you saw on "Your Tub"?

I'm one Escape Man short too, but my missing one is different than dailytherapyshop's. All my inventory slots are filled. The only active items are

1) the selfie stick, which I already used to get the floaty guy down. I can use it to take pictures of each of the three fishes' heads -- if I do, I get a "flash" for the top and bottom fish, but not the middle one.
2) the imitation sword, warrior armor and warrior helmet, which I assume are all part of the same costume. I can move the yellow dot on the helmet, revealing a small hole underneath, but can't seem to do anything with it.

I think I've solved all the puzzles, except the frog apparently wants coffee. I've gotten the heart key box, the house code on the bed, and the 2 plainsight mascaras. Now what?

Is there somewhere you can input the coffee code?

you should be able to get a flash for all three. I had to click closer to the pole than right on the fish head

Thanks, invisiblemonster! That solved my problem.

Oh! Thanks invis! I wasn't thinking laterally enough to realize that

I can input 2 different codes in one place.

was there any reason for being able to pop off the black escape man's head, or yellow ball at the top of the helmet. As far as I could tell, they had no effect on the game, unless I accidentally left them in the "good" state after one of my many click-fests.

Popping off the had of the black figure that you removed the samurai outfit from should have revealed a green head, that became an escape man when you clicked on it. And clicking on the golden ball of the helmet also revealed a little escape man. It might be that you were clicking too fast through it!

The guy hanging from the flag pole is a bit unusual and funny. Where do we go to find weird and funny videos...?

Instead of trying to take a photo of the EM, open the Your Tub player.

My First Boy's Day -- I'm sure I missed something, but

the black safe in the corner next to the hat safe won't open for me. I tried

the code from the fish wind socks in all six orders,

but that didn't work for me. I reloaded. I even tried brute-forcing it, though I can't guarantee I got all 125 combinations. I certainly tried all six permutations of what symbols I had.

What'd I goof up?

This one tricked me for a while but using a walkthrough in French I got it. Have you noticed

you can pick up a certain item again if you've already put it on the table? In particular, the

origami hat. It has a piece of paper that gives you the order to input the symbols into the safe.

Why the FORK would I look above the door? No clue, the door frame takes up almost the entire screen, no indication that I even COULD look overhead there... Forking pixel hunt BS.

There was a wood beam above the door, but not above any other view. But I only noticed that AFTER reading your comment and finding the code, so....