So. Another week has passed. A lot has happened this week, too. But that's not what we're here to talk about, are we? Although, if I'm going to be honest, I'm going to say I've missed you since our last get together. I sometimes wonder what you're doing, where you've been, if you're, for whatever reason, you know, having fun without me? Eh, not that I'm checking up on you or anything but I noticed that you've been a little quiet lately. Let's talk about these escape games then, ya? Before things get too awkward with silent pauses and all that. Luckily for us escape-the-room aficionados, production of escape games has been bustling this spring. It's more than possible you haven't even finished playing the past week's worth that were reviewed here on JIG. Be that as it may be, tell me what you think of these next three games, chosen from Hottategoya, MayMay and No1Game... 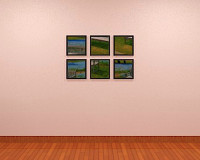 Escape from the Similar Rooms 19 - Starting off, this latest installment in Hottategoya's very like looking rooms escape series is about what you expect having played Hottategoya's games before: Stark, clean aesthetics; clues embedded in the environment; logical puzzles; somewhat disorientating layout. A puzzle or two expect you to go the extra step, not necessarily more cranially troublesome as much as it creates another layer to the clue deciphering you'll have to do. It's hard to fault the designer, though, for asking us to work for our freedom. And, it's nice to see continued thought and creativity going into the formula. 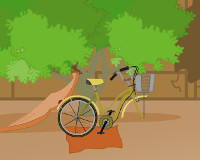 Ready for Adventure? - Oh MayMay. Yes, of course, dear MayMay, yes we are ready for some adventure. But why do you ask and yet then trap us in this abandoned yard with its high walls and broken rope ladders? Hurumph, okay then. Let's just look around and see what we can piece together for our upcoming adventure. Never mind a few little inconsistencies (glitches) in the design, the puzzles are clear enough to make sense of, even if the clues are not altogether too clearly presented or user-friendly. Following a particular protocol in how and where you use items is also requisite. Something about it—playful title, cartoonish design, or whatever it is—makes this more enjoyable than the puzzles alone would be. 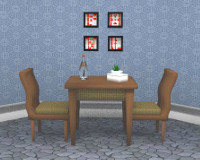 R-TO - A follow-up of sorts to R-LO, No1Game again eschews their characteristic cartoon graphics and escaping green men for a not-entirely-new new style awash in fuzzy graphics and retro furnishings. It's a quick one, although the clues can feel slightly abstruse or, rather, clumsily presented. Purely subjective reasoning on that, though. That said, the room is inviting enough and the puzzles entertaining enough to make this worth a Weekday Escape mention. So here it is.

I'm not having much luck with these escape games today.

I managed to figure out the coloured picture frames clue, to open the safe with a red gem in it. Aaaand that is as far as I got.
Spotted the clue on the Room 4 sign, but couldn't find a place to use it/

In Ready For Adventure?

I managed to re-build the rope ladder using the bit of rope I cut off with scissors, but then couldn't figure out how to use the rotten egg clue.
Should I maybe be counting spots or pointy edges to the broken eggs, instead of any combination/sum of the numbers in the nest?

Here's hoping I do better with R-TO

...The answer to that question is no.

Um, I'm going to come back to these later.

In similar rooms, the room 4 sign clue is used for...

The buttons on the floor in room 2. Simply press the buttons as shown in the clue. Then open the drawer in that room for another gem

Ready for adventure:
For the egg code...

Count the spots for each egg

In Ready for Adventure, I was really overthinking the four-letter puzzle. The clues appear

inside the middle cabinet

and you solve as follows:

I realized this after creating a rather elaborate Excel spreadsheet and checking boxes for each of the two colored clues. What a waste of time!

Similar Room 19 for the blue gem -

The button on the wall in room 1 controls something also in room 1.

Use what you find on the box in room 3.

Quick tip for eggs in Ready for Adventure:

That's not a 7, no matter how much it looks like one

I've found a lightbulb, which I've used on the lamp and a bottle which I can't open. I can see the pictures are clues, but they don't seem to relate to the puzzles I have. I tried the four non-illuminated numbers on the number box, and that didn't work.

Leaving it for a bit and coming back to a couple of hints seems to have done the trick!

Even with being pointed in the right direction re: what the changeable number controlled, it took me until about 5 before I finally realised what to do.

Made it out, after finding out

those were buttons and not just fancy floor lighting to light up the rearranged pictures. Which honestly, I should have been able to physically put at least one set into the correct order.

Thanks for the hints, everyone. It's been one of those days. Which is funny, because my brain was working pretty well for a moment there, when I aced the computer test that somehow proves I'm an awesome enough driver to earn a full, unrestricted car licence.

Well, that was an unexpected ending to Ready for Adventure!

Who knew a wall had to be clean BEFORE you could plough your way through it?!

Couple of things that make it easier if you get stuck:

Yes, there is something hidden under the yellow mat. You might have to click in just the right spot though.

Surprisingly, you don't need a screwdriver for that um, "home made" safe.

Having coloured spokes on a bike wheel is a little unusual...

Some Help with the illuminated number?

On Ready For Adventure, did anyone else notice

that you can zoom in on the pedals and get a partial view of the colored spokes of the front wheel, even when it hasn't been put in place yet?

in similar rooms I cant seem to figure out the

coloured picture frames clue. Applying the colours directly to the box does not work. I have checked to see if any of the rooms has a different arrangements of pictures and they do not. I have tried pushing the button and checking the pictures again, but to no avail. I have tried a mirror image of the colours and an unsidedown image.

Alas I have failed.
So I would love an answer.

Put the pictures in the proper order. You have to do this mentally, sadly.

if you look at the picture itself, it is jumbled and out of order. If you re-arrange the pictures to resemble a large picture of a park bench, then look at the colors in THAT order, you get the correct combination...

The pictures are out of order.

LA Is So Lucky!! So Is Everyone With Such A Company Nearby!!! Who Wants To Try This???!?

These numbers don't refer to the box on the couch...what else hasn't been solved yet?

The two-button box on the table - notice how the buttons are blue and yellow?

For the floor buttons in Similar Rooms

Assuming you already have the clue

you have to visualize how the row of 2 buttons would be positioned relative to the row of 3 buttons. Even after I drew a picture I had trouble with this one ...

There is a light bulb underneath the left chair. You have to click in the space under the seat but between the legs to get to that view.

comes from the lit picture. Click on the lamp whilst zoomed in to the numbers picture to see where to screw it in.


wants you to count ALL the triangles. E.g. the last shape has the 5 small triangles, the one on top AND the big triangle they are all in. If you give up, the answer is...

The rest is pretty straightforward. I might just add

that the way you receive the screwdriver, and the actual escape, was rather bizarre and unexpected. Then again, maybe I should have realised there's a reason somebody just so happens to have a lifesaver attached to their wall.

In R-TO, I looked all over for the screwdriver, and after I had almost given up

I saw that it had been added to my inventory. *whine* But I wanted to pick it UPppp.

The solution the R-TO triangle puzzle.

You have to hold the note with the shapes on it up to the yellow light bulb. Then you will see all the triangles displayed in each shape.

3667 works as the solution to the triangle puzzle