We start in tomoLaSiDo's apartment looking for futon beaters, and then get into Liromisty's room full of snow and featuring apparently alive Snowman. Dark and very atomospheric game by YeXintong wants you to solve a few puzzles only,

Four puzzle games are from three developers, the first one by Rob Alvarez' (rob 1221), the following two are short puzzlers by Toombler and the last one by leeseouyoung about a ghost loving sweets. 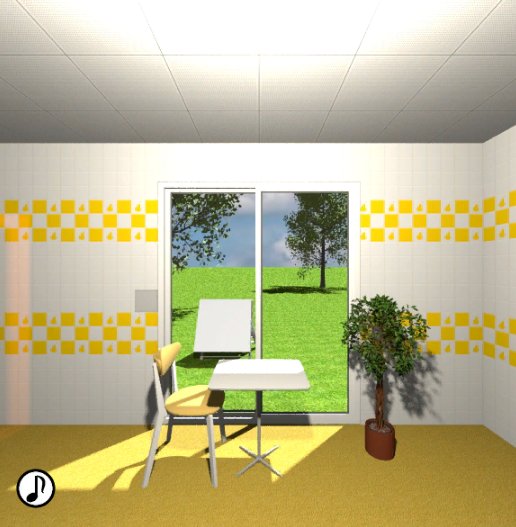 We got an easy game from tomoLaSiDo this time - no language barrier and no tricks. Just a few puzzles. For the perfect ending, you need to find two beaters - the third one you need to complete some puzzles.
The cursor isn't changing, no save option, one ending.

Escape the Snowman and the Room Burried in the Snow 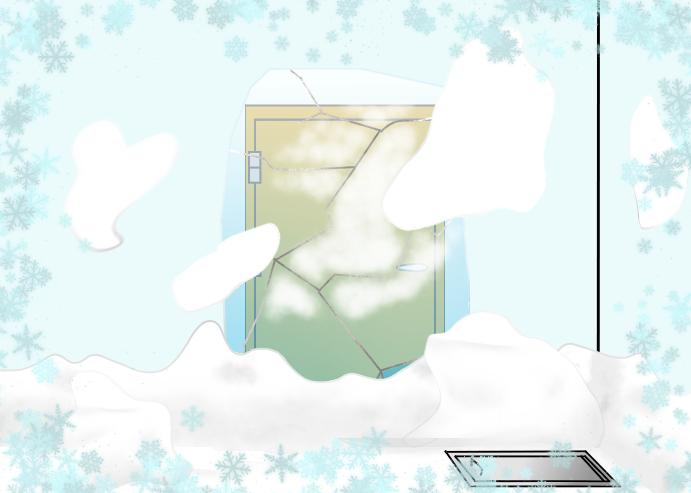 Liromisty is back with a lovely winter game. The game again has very retro graphics, but also the originality and wit of the old games. You are supposed to escape a room full of snow and to solve several puzzles and while solving them think...
The cursor isn't changing, no save option, three endings. 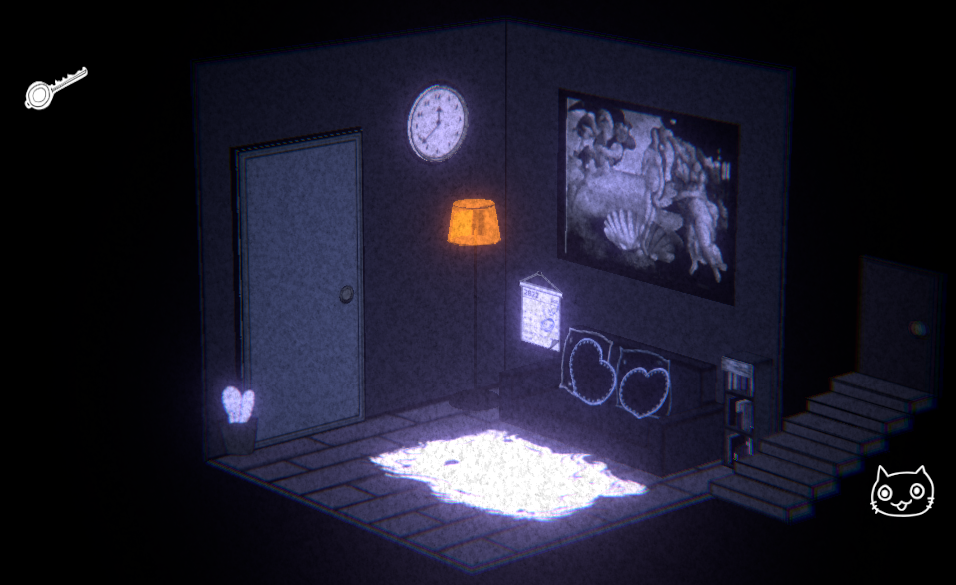 A charming (and obscure) game by YeXintong it's not long, but it may take you some time to solve the few puzzles that are there. They're not hard, but thinking out of the box is important - and don't forget that you can right-click to rotate the scene.
Controlled by mouse.

In each of the thirty levels of Rob Alvarez' (rob 1221) puzzler you need to get a small robot to the exit. Some obstacles on the way are insurmountable, but the robot can shoot the ledges and use them to get over them. It's fun.
Controlled by AD/Arrow keys, W/Up to jump, X/Space to throw a ledge, R to restart a level. Autosave. 30 levels. 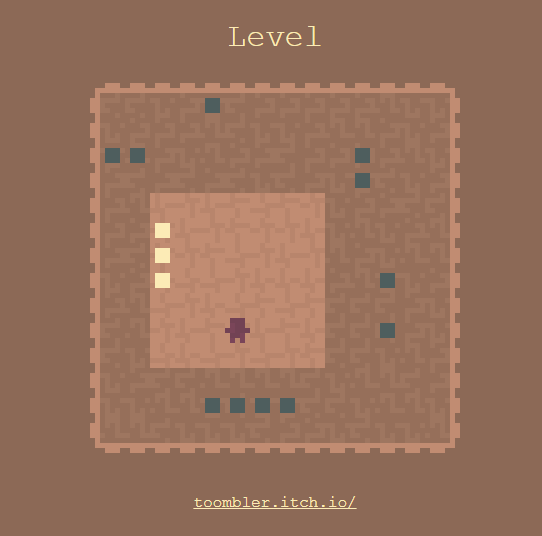 One screen puzzler by Toombler requires careful planning and you probably won't avoid many attempts. Fortunately, there is the undo button.
Controlled by WASD/Arrow keys, Z to undo, R to restart. 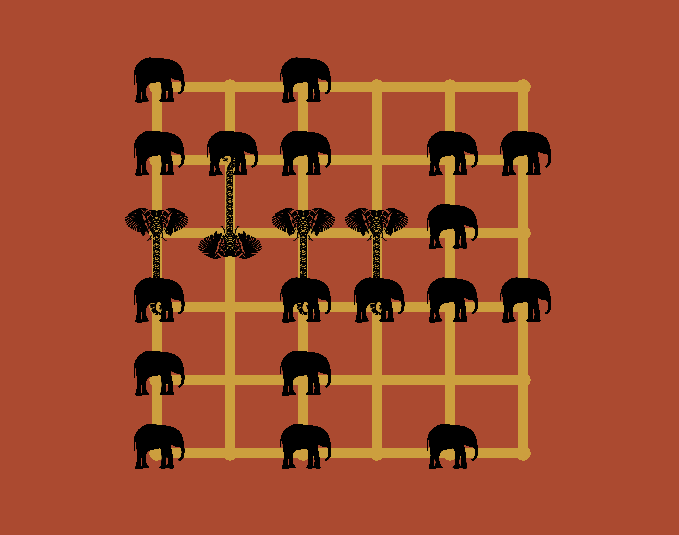 Toombler's older game has only six levels and is cute - in each level you need to protect all the elephants in the grid.
Controlled by mouse. 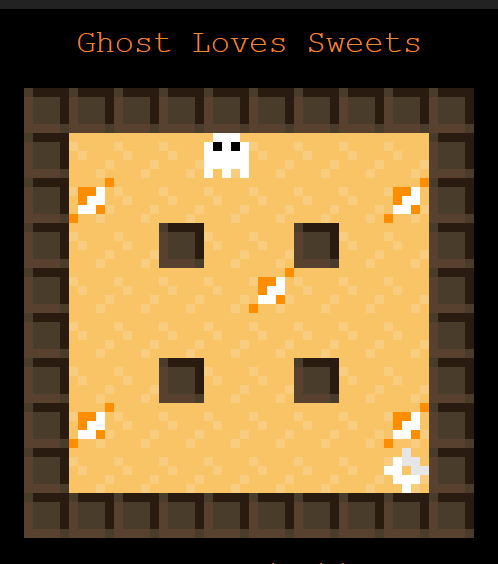 Finally, we have one game by leeseouyoung for fans of sokoban games about a ghost who needs to collect all the sweets in the room to get to the next level.
Controlled by WASD/Arrow keys, X to select, Z to undo, R to restart.

You might have better luck downloading The Hermit instead of running it in your browser—it has some huge assets, and promptly locked up my browser when I clicked Start. (The download decompresses to a whopping 735 meg—that's more than can fit on a CD-R!)

Nice aesthetic, but it doesn't take that much data to make a game like that. Optimize your assets, developers!

I like these Liromisty games. Just tricky enough that you need to scribble down a note or two, but plenty of fun. I hope we get more from this dev!

Pay attention when using the lone inventory item in Escape Challenge 176—Room with Futon Beater. Use of it not only solves puzzles, but provides clues to other puzzles!

3,767 Views
0 Comments
chrpa— Jayisgames needs your help to continue providing quality content. Click for details Welcome to the Roundup 59 with three games! As mentioned in the previous roundups, only odd-numbered episodes are featured since even-numbered are for Robin Vencel's patrons. More...  ...

3,357 Views
0 Comments
jayisgames.com— Yes, playing games is sure fun, especially when you don't need to spend much money to do so. Game Pass is the solution for those of you who want to play games for a small fee....  ...

3,499 Views
0 Comments
jayisgames.com— The world of iGaming has become an integral part of many players' lives. The wide majority of games attracts various users, thus, every business owner is trying to make the best offer. Choosing titles from reputable developers is a top...  ...

The Best Retro Games Ever: A Treat for Gamers

2,906 Views
0 Comments
jayisgames.com— There are various kinds of games available out there. If you're a gaming enthusiast, you must have heard them all, but what about retro games? Have you ever heard of retro games? Do you know if they still exist or...  ...