TomoLaSiDo has been diligent the past two weeks and added two cans to their vending machine in addition to the usual escape. From Poisen we got a beautiful point'n'click game that should be much longer and from No data a solid escape - don't forget to enlarge the game screen, playing is much more comfortable. Esklavos is back with a new escape - it's a one-screen game only, but there is much to do!

There will be no Weekday Puzzle this week because there are not enough games available.

TomoLaSiDo has added two more cans in their vending machine, so again, roll down to see the lowest shelf and here they are!
The cursor isn't changing, autosave (the game saves already opened cans), one ending. 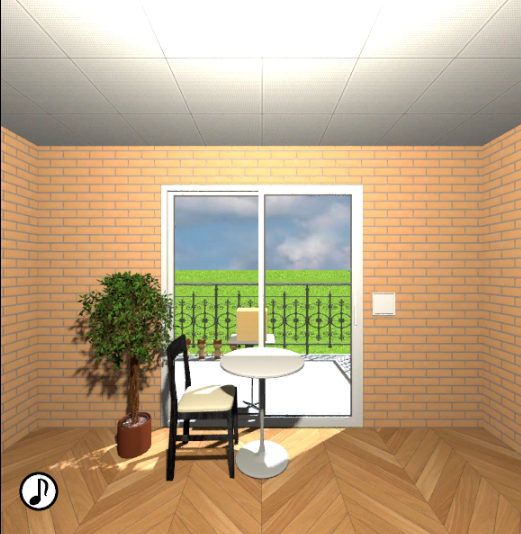 In this tomoLaSiDo's you need to make a pumkin pie for the perfect ending, but you can't escape without it anyway. You aren't supposed to look for ingrediences and bake it - there is a special device that bakes it four you!
The cursor isn't changing, no save option, one ending.

Magical and mysterious point'n'click Poisen's game is, sadly, too short. The atmosphere of far north forest, the soundtrack and beautiful hand drawn art are asking for a longer game, and I believe that there is much more in the forest than we are allowed to see. Oh well. Next time, hopefully. For now, we've got this very nice game.
The cursor isn't changing, no save option, one ending.

Escape from the Inn

No data's escape is a good one though not exactly easy to play. You're supposed to escape a traditional Japanese inn and all escapists know what's in an inn like this, we've played many of them. The game has nice puzzles but as mentioned earlier, there are minor issues - the gamescreen is too small (can be enlarged), one room is very well hidden so careful exploration is necessary, and most of all, sometimes you need to click and drag a door or an item. Overall it's an enjoyable game. Patience is required.
The cursor isn't changing, no save option, one ending.

Esklavos introduces new characters, Leonor and Raúl, and I really hope we'll meet them again. In this episode is the couple locked in their own house and they can't get out - the key is hidden somewhere in the room but Leonor is sure that it's Raúl's fault and Raúl...well, Raúl thinks the opposite, of course. Felipe, the cat, seems uninterested and hungry. Can you help them?
The cursor is changing, autosave, one ending.

Tapiola started out great but game froze when I put the combo into the birdhouse. I'll try again later.

When you click on the television, Raúl scratches his crotch!

The berries puzzle in Secrets of Tapiola is one of those think-outside-the-box kind of puzzles.

The three lines have to connect all the dots, but don't have to start or end on a berry.

Rare complaint about this tomoLaSiDo:

The wooden dolls on the patio are really difficult to make out, even when I zoomed the game frame quite large. That's so unlike tomoLaSiDo to put in something hard to see!

If you're not sure what to do with the information revealed after solving the three-button picture frame:

That symbol is a fancy version of a caret, which is a proofreading symbol which indicates something should be inserted.

The symbols match those found on the patio door lock. They also reference something else.

Look carefully at those wooden dolls on the patio. They face in different directions.

Two of the dolls face forward, and are next to each other. This is important!

The dolls give you the sequence for the patio door lock—just match the direction they face with the directions of those buttons. But don't forget that clue revealed by the three-button picture frame! That tells you to insert two other directions in the sequence.

If you're having trouble getting Escape From The Inn to load, try this link. Be patient—it takes a while to load and initialize.

I hope your experience is better than mine. The puzzle box on the table was unbelievably slow to show button presses for me—like two seconds between press and the new color appearing. And custom cursors are evil. They interfere with normal mouse movement, and don't add anything useful to gameplay. The one here made manipulating an item in the onsen a downright grueling experience.

How to Learn to Make Games: Languages, Engines, and Everything a Beginner Developer Needs

2,763 Views
0 Comments
jayisgames.com— Developing games has become more accessible. Many engines, templates, libraries, and frameworks designed specifically for games have appeared. But at the same time, there are new difficulties - now you have to understand everything. Just take it and make...  ...

358 Views
0 Comments
jayisgames.com— It has been well over a year since the first Undecember trailer set fire to the internet - or at least the little corner of the internet that deals with cross-platform mobile and PC games....  ...

5 Accessories To Level Up Your Gaming Setup

548 Views
0 Comments
jayisgames.com— Gaming setups are the pride and joy for people who enjoy winding down with games. Gamers are so passionate about their gaming experience that some invest a lot of money into building their ultimate gaming setup. A great gaming...  ...

1,117 Views
0 Comments
chrpa— Jayisgames needs your help to continue providing quality content. Click for details Welcome to Mobile Monday! YoGreenSoft's (yogreen) has released a new game and it's cute and clever, and has an atmosphere that few devs can create. Then comes...  ...