Life in Coconuts Park's Southern Islands isn't boring - Glynn, the turtle, recently escaped and you need to find it. Hopefully it diddn't get far on its short legs. Selfdefiant returns with a new haunted asylum, and then you find yourself locked in the room by Escapegamemaker. The last comes Esklavos with pirate point'n'click adventure from Carribean. Ahoy!

No puzzle games in this WE. Tommorow will be posted Weekday Puzzle. 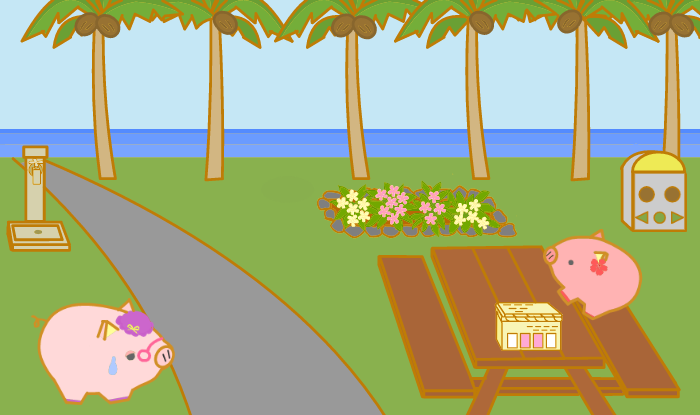 Do you remember the previous episode of the Coconuts Park's series? We met Mrs Kieve there walking her turtle, and in this episode the turtle got away! Sad Mrs Kieve is looking for it everywhere and needs your help. Well, it doesn't take long to find it - after all, this is one screen game only.
The cursor is changing, no save option, one ending. 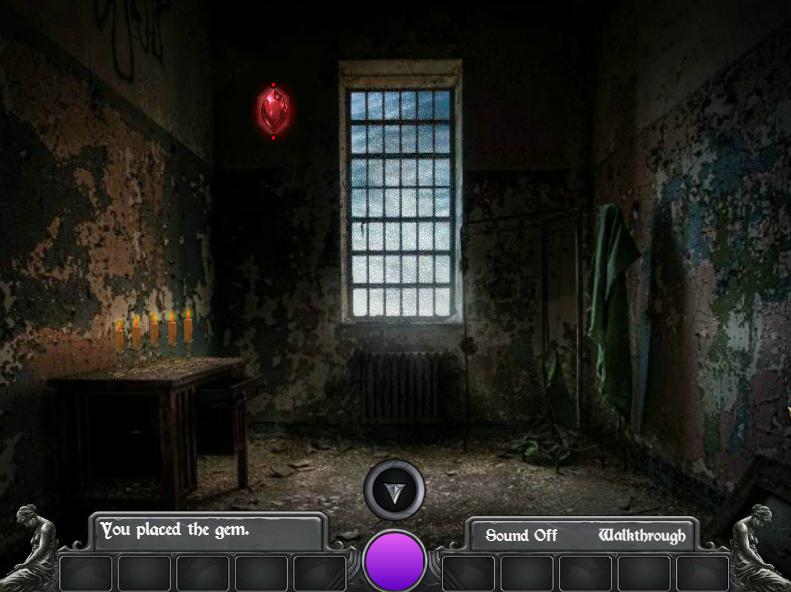 We've got a a brand-new asylum by Selfdefiant! It's a tiny asylum - where are the times of huge asylums with dozens of rooms - so you don't get a map and you don't need to look for the green bottle neither - just hover your mouse over a purple ball and that's it. No need to say that the asylum is haunted but it's only one demon, rather small. Your goal is to collect five blood-red gems and place them into the sockets which appear after you find the last gem - and finally leave.

The cursor is changing, no save option, one ending. The candle puzzle is slightly bugged but the second attempt worked for me.

The escape game by Roomescapemaker has an interesting concept - you need to turn all red red lights in the room into the green ones, each in a different way. Sometimes you need to solve a puzzle, sometimes use an item you find. It's a pleasant and good looking game, but notice that there is a timer - you have thirty minutes to escape. I would say that's enough time, the puzzles aren't hard.
The cursor is changing, no save option, one ending.

Between 2008 and 2013 Esklavos released 10 chapters of The Ballad of Ketinetto. They are available in Flash using Ruffle emulator on Esklavos' site but not all games run properly.
Now we've got the 11th chapter and can be played without knowing the previous chapters as separate point'n'click adventure featuring pirates, rum, coconuts, small tropical islands and the awesome musical performance. Hopefully we'll get the 12th chapter soon!
The cursor is changing, autosave, one ending.

Finding Glynn has got me stumped.
I have opened the wicker basked on the table and also found the note. I'm assuming the garbage bin has something to do with the coconut trees but just can't figure it out.

I have tried the trees from L to R. Two coconuts means R and 1 means L. That didn't work.
I have also tried all the coconuts L to R and which side they are hanging towards. That didn't work either.
I have dug up what I can only describe as an alien finger. Not sure what to do with that.

Before I get to helping, I have to say, the ending to Find Glynn is hilarious!

Your assumption is safe - the hint for the bin is in the trees.

The bin actually has 3 buttons you can press - left, right and middle. The middle button lights up both left and right lights. So 2 coconuts = middle button.

@stuckinabasement - tvm for the help.

Escape Digital Asylum finally loaded ... got out without too much hassle.
Those orbs always remind me of Mateusz Skutnik's trolls in 10 Gnomes - you never know how many you're going to get. I found ...

I got the same number of orbs as you. If there are more to be found, I'm certainly not going back for them—Selfdefiant games are too much headache with all their bugginess.

The hotspots are a little weird in The Ballad Of Ketinetto 11. To get the map from Sharky:

You need to select the mug and click on the map, not Sharky himself.

I got 7:21 on Red Light, Green Light. What's everyone else getting?

I think I got through somewhere in the 7:40s.
Took me a while to figure out that

there was no second keycard, and that I had to use the one keycard multiple times.

The Best And Most Popular Mobile Games For College Students

3,421 Views
0 Comments
jayisgames.com— There are a lot of exciting and entertaining games being put out by game companies nowadays, but only a few of them can stand the test of time. Students make up a greater percentage of gamers because a majority of...  ...