This week we've got two standard escapes, by tomoLaSiDo and by Crayfish/MysteriousBox. The second is much longer with a big load of puzzles, but the same can be said for both - some puzzles are sneaky and to solve them, you need to look at them from different angle. Then we've got good point'n'click adventure by The Argonauts full of quirky dialogues (and trying everything on everything). After only two weeks Bart Bonte made available his latest puzzle game for pc players, too. 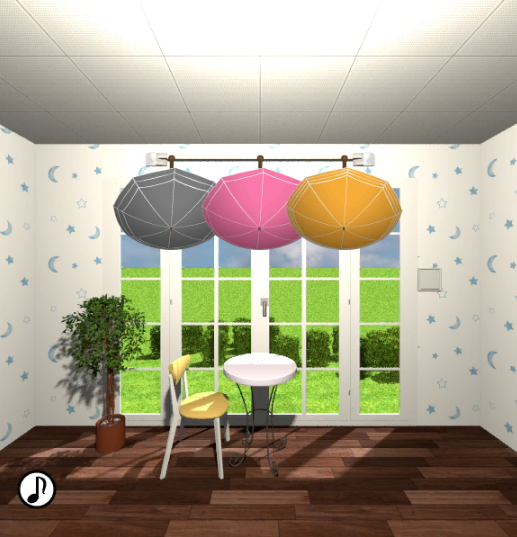 In the newest tomoLaSiDo's game you are supposed to collect twelve umbrellas for a happy ending, and solve several really sneaky puzzles. The puzzles often don't seem what they are and the solution can be much simplier than expected.
The cursor isn't changing, autosave, one ending. 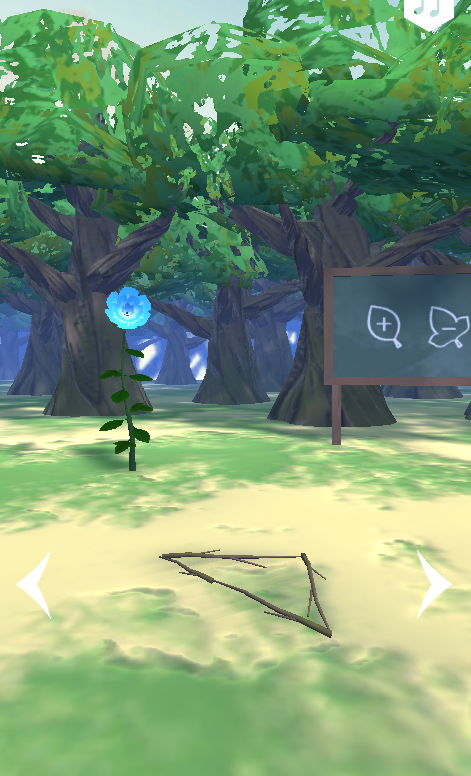 Crayfish/MysteriousBox prepared for you many puzzles in this escape and to solve them, thinking out of the box is required. Your journey leads through a mystic wood and ten clearings, and to get from a clearing to the next one means to solve two puzzles - the first solution cracks a glass in a portal, the second breaks it and clears the way. The puzzles are more clever than they look and often a messy hint turns into a perfecly clear one after short observation.
The cursor isn't changing, autosave, one ending.

P.S. Older games by MysteriousBox are unavailable now but their new game was published three weeks ago in WE N°340 under the name Crayfish. 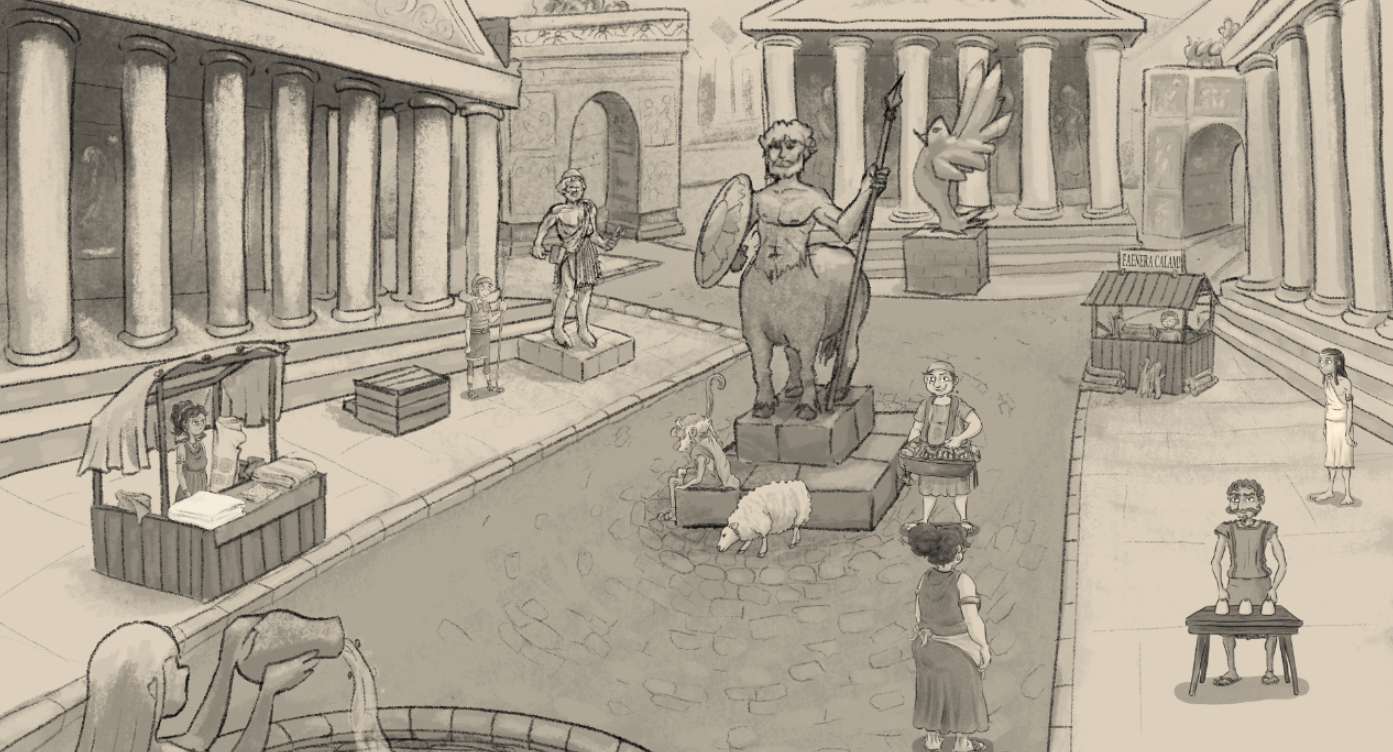 The Argonauts created this old school point'n'click adventure for Adventure Jam 2022. It's a story from ancient Italy, and your goal is to win few worshipers of forgotten Etruscan god, Sethlans, who would like to return very much but to be able to do so he needs at least three believers. Not an easy task, particularly when there is a Roman god with the same specialty as Sethlans...
It's a good game with well drawn art, a bit unpolished maybe, but fun and keeps you entertained for quite a while. If stuck, try to repeat dialogues with characters - a new option may occur. A walkthrough is available on YT and the link is in comments below the game on itch.io.
Controlled by a mouse, manual saving.

An older game by The Argonauts was recently published in WP N°63. 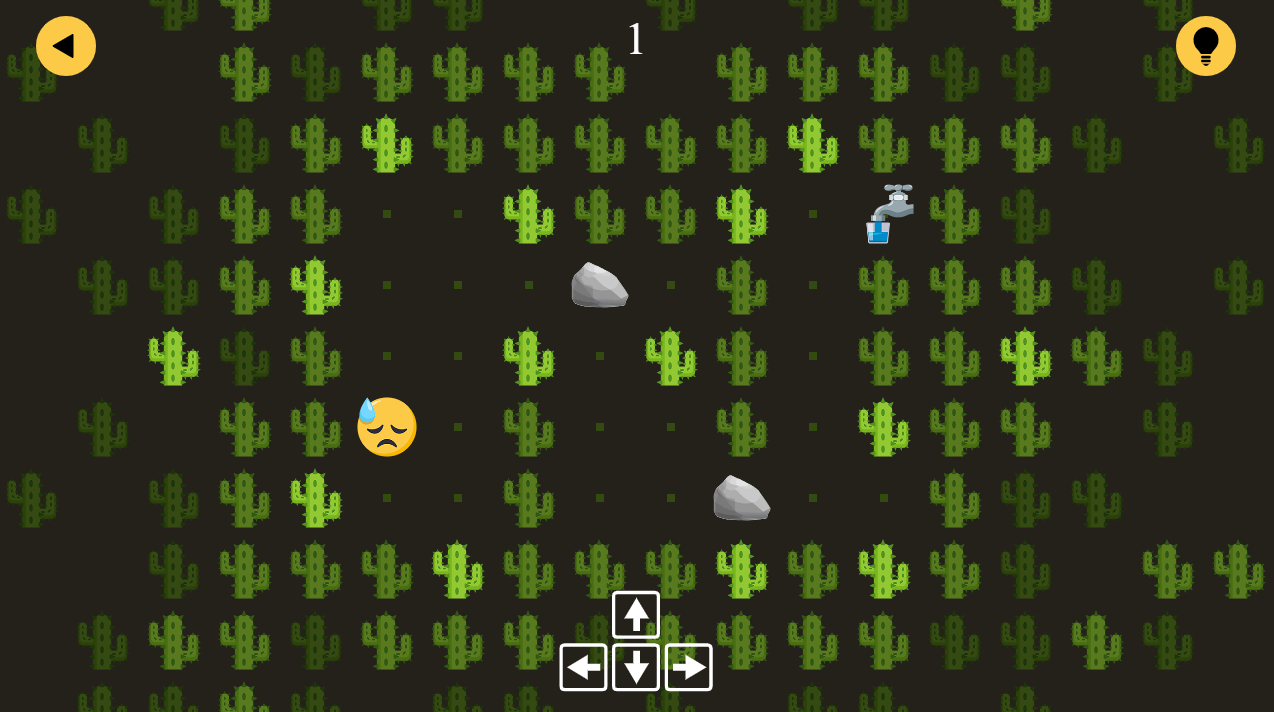 The latest puzzle game by Bart Bonte was released for mobile devices two weeks ago (MM N°330) and now it's available for pc players too! It has 25 levels (mobile version has 50 levels) but it takes a while to get through - some levels are rather tough.
Controlled by WASD/Arrow keys. Autosave.

Man, Mystic Woods was quite the mental workout! Not sure I'm understanding the final puzzle, though…

I know the scroll clues you in to the fact that the sticks found on the ground along the path form markers in a 3x3 grid. I carefully kept track of each design as I went, and when I found the scroll, I drew them out. But some of the "bouncing cube" sequences don't seem to actually draw any of the six symbols on the larger cubes beneath.  🤔

The sequence I have is sideways hourglass, right triangle, a four missing one piece, square, downward triangle, spiral, diamond, plus, and connected diagonal squares. If you lay those out according to the scroll, you have the diamond in upper-left, sideways hourglass in upper-right, downward triangle in lower-left, incomplete four in lower-right, and connected squares in the middle. Is that not correct?

So confused about that. You oughta see the chaos I've scribbled all over half a page of paper trying to figure out all the puzzles in this one!

Don't like the new transitions tomoLaSiDo is putting in their games—that flash of grey is really distracting.

You have the correct symbols but have not put them into the map correctly.

The trail starts in the center square and then spirals anticlockwise ending at the top right.

If done correctly the top left will be the four missing a piece, bottom left is downward triangle, bottom right is diamond and top right is two connected squares

I think I prefer those surreal, moody color games Bart Bonte does. But this was a nice change of pace.

Ah. Is there something which suggests that order?

I'd have expected the symbols to match the locations where you found them—starting "backwards" like that, from the end of the path, doesn't seem intuitive.

I don't have the IQ for this game. The only puzzle I figured out on my own was the 4 corners puzzle.

I didn't get the 5 colors switches. I see the flowers have something to do with it but makes no sense to me. I had to consult a video.

Next scene. I should have figured out the 4 colors but didn't.

Can someone explain the pendulum?

I give up. A couple of the puzzles made sense from the clues given but most for me were nonsensical. What is up with the woodpeckers???

Let's see if I can explain those, starting with the pendulum:

The clock provides the clue as to what should be happening with the nearby control panel. The pendulums (square, circle, triangle, wasn't it?) each have a particular type of motion: steady motion, or motion which abruptly changes speed from time to time. Taking note of the motion of the pendulums, you have to match that on the control panel.

Not sure if it's random each play or not, but for me, two pendulums were random motion, and the third was steady. By clicking the dials on the control panel, you can match the clock hand on each shaped dial to the appropriate kind of motion.

As for the woodpeckers (where on this sheet of scribbles was that?):

Each woodpecker is on a tree with a certain number of holes in it, from 1 to 3. It might help to write the numbers 1, 2, and 3 out on paper as I did. In my game, the woodpecker on tree 1 was tapping the tree in a specific pattern: two taps, a pause, and then five taps. I wrote that down below 1, and did the same for the other two trees.

That gave me this, according to my scribbles:

It took me a minute to see it, but the taps form the numbers 1 through 6. (As Velma Dinkley would say, "Look—a clue!"  😁) So you can read that as a sequence—using these numbers from my game, the sequence would be 2, 1, 3, 3, 1, 2. Press the buttons on the control panel in that order to crack or open the portal.

Again, this was a serious mental workout. I didn't expect these puzzles to be so devious!

Thanks for the explanations. I was way off on the woodpeckers because the sequence was to fast for me and I got frustrated. That is as far as I got in this game. I won't be going back. That doesn't mean it isn't a good game, it just wasn't a game for me.

As always, love Bart Bonte's puzzlers, but the music on Logica Emotica, this his latest, drove me a little cra-cra.