We start (and end) with Selfdefiant's game; this week we postpone their invitation to Georgia and visit an old space station instead. Then comes a brand new dismantlement by Gam.eBB, and after you disarm the bomb hidden in a bowl of noodles you need (and you want) to escape from a strange green room. It's the latest kitposition's escape and an enjoyable one! Another Selfdefiant's asylum awaits you at the end of WE, and we have a bonus game this week, Dassyutu's escape room, unfortunately with a bit complicated controls. 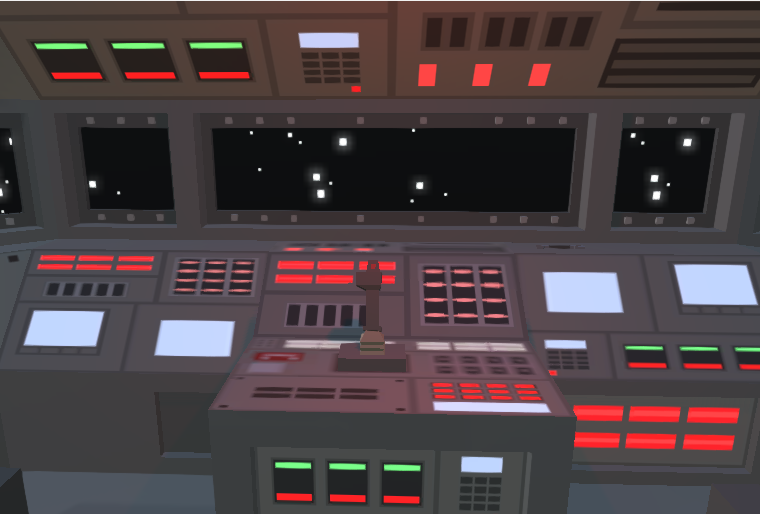 In Selfdefiant's escape you find yourself imprisoned at an old and empty space station. It's quite easy to open doors between ship compartments but then you need to figure out several puzzles. A changing cursor is helpful indeed - the ship is crammed with various instruments, blinking displays and buttons, and only very few are active. At the end you get a space station door key and it's a plain door key - must be very old space station!

The cursor is changing, autosave, one ending. 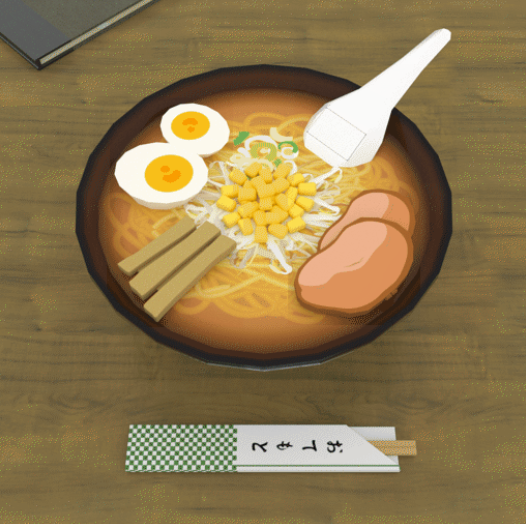 The bowl of noodles may seem familiar to some players at the first sight - well bowls of noodles do seem similar but that's not what I mean - and that's because we played dismantlement of bowl of noodles few months ago (the link you find below). This is a brand new one, and it's good to see that Gam.eBB are still creating!
The cursor isn't changing, no save option, one ending.

P.S. The previous Dismantlement: Noodles you find in WE-RE N°41. 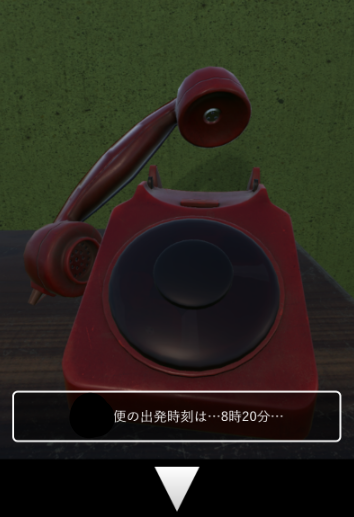 After a year, kitposition released a new escape game and it's a pleasure to play it. The green room where you find yourself has an eerie and almost creepy atmosphere, but the items you find and puzzles you solve are absolutely normal, though there are signs that something strange is going on underneath. Maybe consequences of earlier actions unrevealed to us.
The cursor isn't changing, save option, one ending. 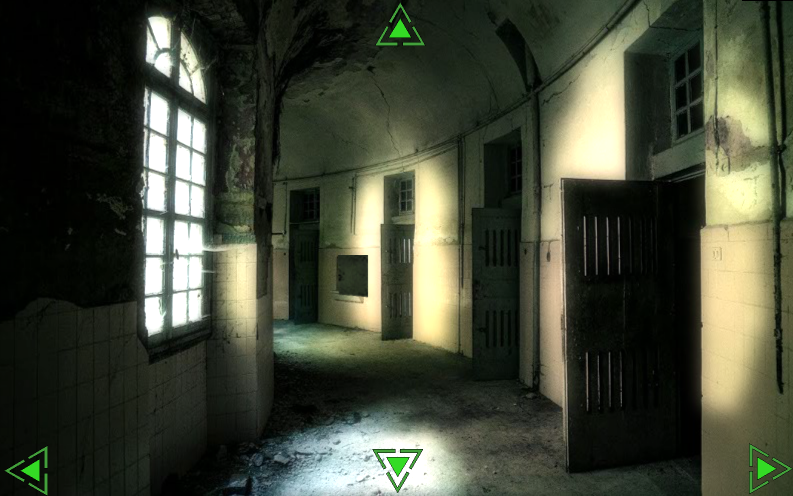 After a long time, Selfdefiant created a new asylum and you find everything there - purple orbs floating in the air, evil ghosts, colorful keys and the little shop where you can change collected orbs for useful items. The game is missing one thing - a changing cursor. However, the asylum you are supposed to escape isn't vast and the items you seek aren't hidden in a rubble so not a big deal.
The cursor isn't changing, no save, one ending. 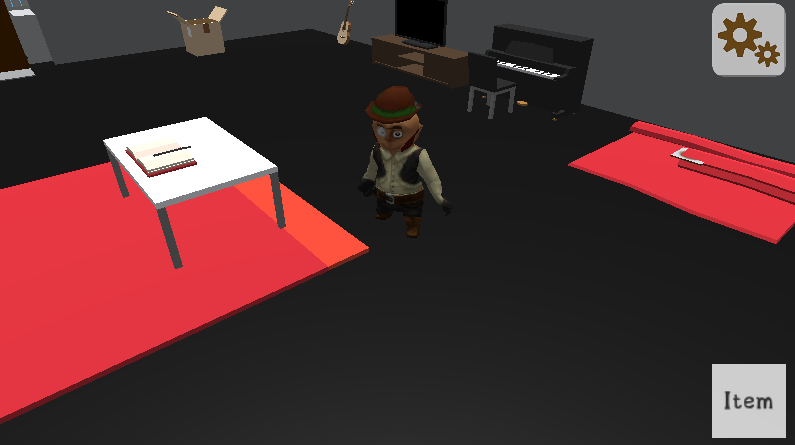 Bonus game is Room Escape 35 by Dassyutu with complicated controls. You need a left mouse button (moving around and collecting items), a scroll wheel (zooming) and arrow keys (to move a camera).

yes you get an important clue from the phone

but you don't need to understand any Japanese

there is more than the text in Japanese...

...is there any clock in the room?

(Does a little dance at finding out Gam.eBB is creating new Dismantlement games…)

Boy, now I remember why I don't care for SelfDefiant games. Those glitches with movement were so annoying.

I really wish Kitposition would release their games in dual language. Even with Google Translate deciphering that Japanese text, Disquieting Room was harder than expected. And yet again, my arm is aching from holding the phone up to the monitor—the things I do for an interesting escape game…  😁

Man, Dismantlement: Miso Noodle was worth the wait. Soooooo satisfying to hear those little screws squeaking as each bit disappeared. Hoping to see more of these incredible games from Gam.eBB soon!

I was dancing with you in spirit! So great to see a fun dismantlement game again.

Thanks, crew, for this great round-up!

Please, could someone kindly tell me how to do the Google translation of the Japanese text that comes up in games like this one? I typically copy and paste into the translator, but in games I can never copy the text.

the numbers 8 and 20 were easily recognizable in the phone text. But I see no numbers at all - unless they are in a Japanese text style. Which puts me back to wondering how I can use the translator with this text that I can't select.

Thanks for any help you can offer!

I use the Google Translate app on my phone.
Basically, the game is running on my PC and I am holding my phone up to the screen to scan the text in Japanese.
The app translates the text to English on my phone.

Doesn't always work that well for me, though ... meaning the translations aren't consistent - sometimes I scan the same thing at different times and I get different results.

Not sure what would work if you are playing on phone.

I do use Google Translate. You can download it for either Android or iOS from the respective app stores. When you launch it, look for a Camera icon right below where you enter the text to be translated. Click that, and your phone's camera will become active. Point the camera at the text to be translated, and after a brief pause, it should draw the translation right over the original text in the image. It looks kinda like this.

Holding your phone up to your computer monitor does make your arm mighty tired.  😄  And Stuckinabasement is right about the translations—sometimes they're accurate, but sometimes they are way off. And there are a million things which can interfere with Google Translate being able to "see" the text, from bad lighting conditions to monitor flicker to fingerprints on your phone's camera lens. But when you're desperate to play a cool Japanese escape game, it gets the job done!

I don't translate anything and my knowledge of Japanese language is zero.

There are very few escape games nowadays and the good ones are (almost) exclusively by Japanese devs. I wouldn't be able to put together WE without Japanese games and I don't think that anybody would. That's why I post them...and I play them to know whether it's possible to get through without any knowledge of the language.

So, when I'm able to get through I hope that others can too, and even though I don't understand stories behind the games, I like to play them.

I've changed the image to Disquieting Room - the text is tiny but if you enlarge the screen you can see Japanese text from the phone and Arabic numerals. That's what I meant.

Thanks to all of you for your help in replying to my plea! I don't know why I never thought of using my phone to help me play a game on my laptop. Wonderful! I'll go lift some weights and "tone up" and then give the phone method a shot.

Also, I didn't mean to slight Japanese developers or the use of the language in games. It's fitting. Often, I find, as you have, that it's not a problem; but when I can't figure it out I either play something else, or, in the case of good games like this one, I struggle to find my way through. The help offered will be of great use!

Oh chrpa! NOW I see what you were talking about regarding the numbers!

in the image for the game in your write-up it clearly has the numbers 8 and 20. That never happened for me in the game. All I got was Japanese writing with no numbers. Not sure how you got the 8 and 20 to pop up. However, I tried 8:20 on the clock and nothing happened for me.

Downloaded the app and finished the game! Thanks everyone!

Hmmm...it could be your browser. I remember having issues with Japanese texts in Firefox but it's years ago. I played this game in Edge.

Disquieting Room plays perfectly for me in Firefox. I bet Snarfhead was missing the same thing I was:

The Japanese voice on the phone is saying that you've called a hotline for flight information, and it asks you to "dial" the flight number.

You get the flight number from the four playing cards you pick up. If memory serves, you'll enter JA52.

When you've typed the flight number in, the message now tells you the time that the flight leaves.

This gives you the time to use on the clock in the second room.

Like many games, this one doesn't allow you to skip ahead. If you haven't seen the clue for a puzzle, there's no way to solve it even if you already know the solution. If you don't already have the items in the spoiler above, you can't solve the telephone.

Yes, jF, that was it. As soon as I got the app and could decipher the phone message I knew what to do, and the rest of the game played out fine.

So glad you all told me about using the phone to translate the laptop screen. I could never select the text to copy it into the translator that was open in another window. Now I don't have to! Wonder how many games I gave up on the I could've finished out?

If I didn't have the translations, no way I would make the connection between two seemingly random numbers swimming in a sea of Kanji (I think?) and a clock puzzle.

Before I started using translations, if I was stuck because of something like this, I would begrudgingly check a walkthrough. And then be annoyed with myself for missing something so "easy" to spot. And like Snarfhead, I might even skip the game or the developer.

Now, I try as hard as I can, without holding phone up to screen. But it helps to know I have a fall-back position if I don't suss it out with my noggin all by myself.

I guess one alternative would be to just learn Japanese ... that would solve it.

I just wish there was an in-browser translator that could detect text in images, like the canvases in Unity or HTML5 games. Imagine how convenient and awesome that would be!

3,252 Views
0 Comments
chrpa— Jayisgames needs your help to continue providing quality content. Click for details Welcome to Mobile Monday! All three games featured this week have an attractive visuals and are enjoyable in general. Goro Sato's apartment with a mysterious atmosphere has...  ...