Gooooooooooooood morning, you bright, beautiful, bushy-tailed person, you! A new day has dawned on the internets. The kilobytes are chirping. The servers are singing. And the online comments are... well, the less said about those the better. Except here, of course! This week! no1game's little green men are off on vacation, but what we get is still pretty strange. Primera gives you a widdle bed to rest your widdle head. And Esklavos wants you to save the world from a global flooding, but you'll need to do some finagling to pull it off. 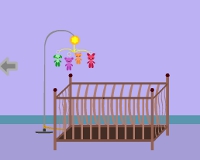 Fly the Sky - The title of Primera's escape game might lead you to believe it holds daring dogfights against Don Kargnage, or perhaps a clandestine and romantic nighttime soar with Superman... instead you've got a room with a crib and what are possibly the world's most over-the-top child security locks. Go figure! There's no changing cursor to help you click your way to puzzle solutions, but clean design, bright colours, and the cutest little mobile means you probably won't need it anyway. 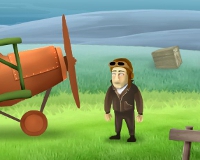 The Aviator Escape - I hope you have your goggles and your dashing silk scarf, because Esklavos is going to send you skyward to stop a mad scientist from "flooding the planet", which basically makes this The Legend of Zelda: Windwaker AU. Like most recent Esklavos games, you'll gain a map to hop around to different locations, but you'll need to activate it first by solving a few puzzles to open them up, which is probably exactly how they do things in the Air Force. 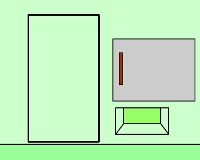 Marble Escape - Be warned that this one is... odd. There are no little green men to be found in this challenge from no1game, but that doesn't mean it's not still weird. In the beginning, all you've got is a wall. Eventually? Still more walls, and a door if you're lucky. This one might take some finagling since it sadly feels a little lucky, but click around a whole bunch and you'll stumble into something sooner or later. Or maybe you won't. I can't tell. I've been here so long. What's it like on the outside? Do we still have cheese-crust stuffed pizza? Is Crowley still on Supernatural? TELL ME THE IMPORTANT THINGS.

Esklavos link is still to Rabbits and Magic.

Rabbits and Magic was Weekday Escape 124 as well as today's 125. just fyi

The inventory is not empty.

See those shades of blue?

Where does the game area end?

The walls have secrets.

What has been placed can be removed.

Stuck on Primera. I'm down to two locks - one with fruit, one with a 4-digit number - and a suspicious patch on the floor. I have a chair I can't put down or examine, and the contents of the three other cabinets, two of which are lit.

It is astoundingly unobvious, but

There are hotspots at the very feet of the cot

Astoundingly. And not what I'd think of using

Primera's game was cute (though I couldn't have solved it without the helpful clue from Oniya) ...
Esklavos is great, as always ...
and I could NOT figure out Marble Escape (despite Viktor's nice walkthrough) ...
And as always, thanks to DORA for the mid-week pick-me-up!!

Hint-throughs are awesome, and that's a particularly good one (thanks Viktor!); but here's an explicit walkthrough for Marble Escape for anyone who wants one, or as a last resort after checking the hints, however you want to roll. No shaming from this corner.

There are scene-changing bars in inventory slot 1. Use them on the wall and you can move.

Note that your goal is to obtain 10 marbles, and you must do this in a specific order; the next one will only appear after the previous one is found. So no jumping around, alas.

Put Marble 1 in the machine in the pink cabinet. Go back. Marble 2 will have appeared in the gap below. Add it as well (no leaving marbles cluttering up your inventory here).

Check the copyright notice at the bottom of the screen.

Go one screen right from the pink cabinet. Click and drag the panel.

Shows up in a previously nonexistent panel in the white marble machine.

Two screens right from the pink cabinet, marble on the floor will be obvious. Dog-eared corner of the view-changing bars in the top left, not so obvious. Click and drag (I found it let me let go somewhere near the right wall).

Same marble problem one screen to the right of the cabinet. Grab the hammer and use it on the bottom right to smash the bar.

Check your hammer. It wasn't bejeweled before.

Someone patched up your hammer job. Smash the world's shell, for the revolution of the world. Or the bar for a marble, you get my drift.

Aw *#$*, the Utena reference was a bad idea, I summoned a Prince. Well, as Utena taught us, hit that little creep until he goes down. Okay, that wasn't the main moral, but I'd say it's certainly a valid takeaway.

Marble escape is a tricky one. You have to think way outside the box in some interesting ways to solve some of those puzzles, and at least one had me resorting to patient pixel-searching to find it, but it made for a fun change from the usual codes and locks.

I liked Marble Escape.
It was a nice change from the number code puzzles and even better for me, I solved it!

Note: All places are marked with bold letter. I'm too lazy to put spoiler each time you move from place to place.

I'm sorry for my bad English.

Also, Marble Escape's concept is truly amazing. Not my kind, though, but still.

Trying to get marble 4, but

whenever I release the mouse button, the panel pops back over the marble.

I assume from the other posts on the game that this isn't supposed to be happening, and it's making it impossible to get.

I'd had that problem as well, initially.

I solved it by dragging the panel over to the floor section, which seems to be enough to make it vanish.

Not a big fan of this guy but oh well
Colorblind-friendly yay (probably you should take a look at the doll ear answer).

I'm too lazy to make wall of spoilers.

It's not that hard, and you will get a screwdriver.

Hello, Dora, and all the staff.

My name is Angela, I'm Brazilian. Your site has given me joy and relief from stress at work for almost ten years now. I am saddened by the news, but as I believe changes sometimes are blessings in disguise, I wish you all great success in everything you do righ now. I wish you all love, health and joy in whatever you decide to do. Thank you Dora, for all those fun Wednesdays. Thank you Jeff and the staff for keeping the site so great all these years.
Kisses from Brazil,

Oh Primera. I think that's the first time I escaped a room by

making it out the door, then for some reason constructing a hot air balloon from a crib, a camp stove and some rope that was conveniently in the shape of a number code.

As there is no comment accessibility on the blog post announcement at the top of the home page feed, I want to comment here with Angela that I am also saddened by the news, and I'm going to miss you guys. Thanks for all the years of fun reviews and scouring the online gaming world to bring the best games all together for easy access. Thanks for facilitating a civil, fun, positive gaming community. And also, thanks a million for all the fabulous introductions. I'm an escape addict, going on over a decade now, and I've met so many of my favorite escape game designers through Jayisgames. Even though I can't check here any more, I have a list of designers' sites to check thanks to you, that I didn't have before you.

And I will be checking back here occasionally. Mostly for nostalia's sake. But also, just in case. :)

Bon voyage. Until we meet again.

I might have missed it but it didn't appear obvious in the "this is the end" post, was it due to financial reasons? Was the opportunity for users to donate researched? I noticed a popup suggesting a donation a minute ago when I visited for the first time since the site ceased updating but can't seem to get it to come back.

Disregard I found the Patreon info, clearly a POP moment. ;)