Doing what I do here, I periodically get invitations from friends to try out those real-life escape game scenarios, but sadly, it's not something I'll ever go for... both because my tendency to get shrill and demanding under pressure would mean ending a friendship as soon as someone fumbled solving a puzzle, and because "Hey, come and play this totally legitimate game where I lock you in a room full of elaborate puzzles," sounds exactly like something a friend would say to enact some sort of bloody Jigsaw-style revenge, and I can't pretend I probably don't have it coming. So let's enjoy these games instead! This week! Amajeto wants you to celebrate the changing seasons without the hayfever. Detarame Factory has one weird but cute wedding for you to attend. And MayMay thinks a little menial labour is in order. 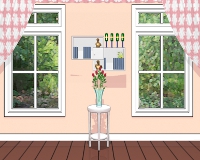 Spring Room Escape - Amajeto tends to be criticized by players for following a little too closely to TomaTea's school of design, but despite some rough edges, this is still a perfectly pleasant little spring-themed game... plus, it's made with HTML5, so you snotty mobile elite who are too good to grub around with us disheveled browser folk can still play along on your phone or tablet, too! Besides, who doesn't want to appreciate the majesty of spring (or at least a lot of pink and green) without all that hayfever? 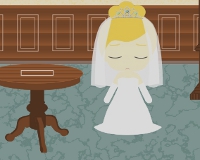 Mis.Dramatic - I confess to not being entirely clear what's going on here, Detarame Factory. There's a sad bride. A well-dressed crocodile. An imprisoned mouse. And it appears to be raining outside. But then again, if a Detarame Factory game didn't make you go "Hmmm," "Awwww," and "Bwuh?" at the same time, something would probably be wrong. There's no changing cursor here to help you out, but a keen eye and a sweet treat or two should help you see your way to freedom. 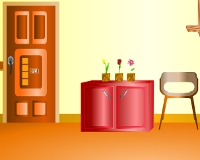 Shoe Polished - Let's be honest... there are two types of people in this world. Those who take care of their shoes, and those who tramp through puddles without a second glance and take their footwear off by flinging them at the wall when they get home. It looks like the shoes in MayMay's game are soundly in the second camp, so you'll need to buckle down and buff them up if you want to find the way out... plus solve a bunch of puzzle locks, of course!

Maymay's site appears to be down at the moment (10am Eastern). :(

and I feel like I'm supposed to be able to solve the 3 button code using the clue(s?) from the three flower pictures on the wall (A->B), but I'm getting nowhere. I'm sure I'm missing something simple!

Order for buttons is

Well I love Tomatea, so I'm not going to complain about games that are like them! But this one has me stumped.
First of all I can't figure how to

get the puzzle piece from behind the picture. Is that a screw? A nail?

What's with the 4 letter code? I tried putting in

but that didn't work so I tried it

and that didn't work either. What am I missing?

to mean it was alphabetical.

Spring Escape was just challenging enough to solve without help, a first in a long time for me. Thanks, Amajeto, for restoring faith in my own escaping abilities.

Now on to the others. Thanks, Dora!!

The cursor changes when I go over an interactive spot.

I love the art and the mouse and the cuteness!

Still working on it...

Your comment helped me figure out what I was doing wrong with the four letter puzzle.

So, has anyone noticed that if you replace one of the 'T's in 'TomaTea' with a 'J' and scramble it, you get Amajeto? I wonder if there's an inside joke there - almost like an escape-game clue in itself. (If 'Tea' is pronounced 'Te-ah', then it works at the syllable level, too.)

get a picture piece, and a 4-digit number clue

(from the positions of the books).

get a picture piece. Apply

the 4-digit clue to the cabinet on the right

to get another picture piece and an empty matchbox.

get a picture piece from the cabinets above. Open all of them for

a four-position clue.
Apply the clue from the cabinets to

the middle drawer (right of TV), get a picture piece.

Get a left-right clue from

the bottom one of the three drawers (right of TV); get a matchstick.

get a picture piece. Note the corner-color clue.
Notice the clue behind

and notice that the white

flower picture can be jiggled by clicking the corners.

on the matchbox, and light the four candles to get a four-shape clue.

to the cabinet on the left; get a remote and a picture piece.

on the TV to get a four-corner clue, a four-letter clue, and a three-position clue.

Combine the three-position clue with

the locations of the flower pictures

to open the drawer

to the left of the TV.

Get a picture piece.
Combine the four-letter clue with

the clue behind the red flower

the top one of the three drawers to the right of the TV.

the four-corner clue from the TV

with the corner-color clue from the table to

Use the scissors to get the last picture piece.

put the picture pieces in place above the couch, turn each piece to its correct orientation, and get the key to go out.

I'm aware this will probably sound ridiculous, but at points Mis.Dramatic felt a bit like an Angela Carter short story in escape-game form. Anyone else think that? No? Just me? Ok...

I liked Mis.Dramatic, but it took me longer than it should to finish as I kept searching for a way to free the mouse from his tiny mousie jail cell! WHY CAN'T I FREE THE MOUSE, DARN IT

I'm stuck with a red book, a ruler, an eraser.. I opened a box behind the library and found what looks like a white envelope, but can't take it. I don't understand the color clue in book. I think I should set the clock but have no clue...( mouse is still in jail but with a lollypop)

pop : count letters in book according to eraser clue for clock

For the Shoe Polished final clue

I have no idea if it's possible to zoom in on the musical notes that appear after you shine both boots. If you want the order


1. treble clef (looks like a fancy & )
2. the one that looks like an O (I've forgotten the name)
3. the double note with just one line at the top
4. the bass clef sign upside down, so it looks a little like a 6

Mildly annoying, but there you go.

I'm really glad to see TomaTea has dropped the "you have no clue" pop ups!

WillYum - That may be a first for me. Thanks for taking the time to let me know!

any text walkthroughs for mis dramatic and shoe factory?

that clock clue from Mis. Dramatic was the only thing that stumped me forever! for those who are experiencing the same:

After you have the book, look at the items in the book (heart, flower, leaves, fish).
Take the ruler and cut the eraser in half and you will see numbers for squigly line (hour hand) and jagged line (minute hand).
I spent forever experimenting with possible times based on these numbers, but the actual time was spelled out in the items in the book!
Take the colour-coded numbers and use that number letter in the word of the same colour. Once you do that with every word, it spells a time.