It's another bee-yootiful Wednesday here at JayisGames. The sun is shining and the birds are singing... I mean, presumably. By the time this article goes live, I will be snug asleep in bed, dreaming the confused hodge-podge of dinosaurs, Borderlands references, and food that make up my subconscious. But you? It's game time! This week! Vitamin Hana needs you help freeing a new batch of animals, but should we break the locks? Nagamochi Games gives you somewhere cute to chill, but you'll need to find some puzzle pieces if you want to leave. And Esklavos sends you after a queen who has set out (unwisely?) to give a dragon what-for. 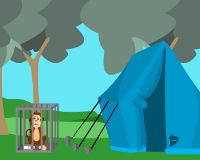 Free the Monkeys! - I dunno, Vitamin Hana. Sure, figuring out how to release hapless captured monkeys (maybe so they can GO Happy?) sounds like a harmless idea, but I'm Canadian. The Kids in the Hall have been warning me about this my whole life. But, well, if you can't trust someone who regularly locks you inside small, confined spaces for their own amusement, who can you trust? Set those simians free! 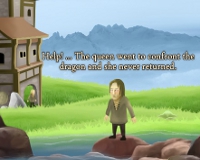 The Queen and the Dragon - Esklavos sends you off on a quest to find a queen who went off to stop a dragon, but hasn't yet returned. Have you seen the way medieval queens dress? She's probably fine and got her bustle caught in a tree or something. Regardless, it's up to you to reconstruct the map and find out where she is and bring her back, preferably un-toasted. You know how queens do. All preferring to be alive and whatnot. 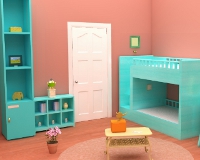 Little Room Escape 4 - Nagamochi Games may have you locked up somewhere, but at least it's pretty darn twee. It's like being inside a cupcake, all bright colours and cute decorations, though the cupcakes I've made typically don't come with strange puzzles and mechanisms. If you want to leave, you'll have to find five puzzle pieces hidden throughout the place, which may be easier said than done given how wonky some of the navigation is, but hey, nobody said escape games were easy!

click on top of the table to get a different view

It's a shorter one from Nagamochi, and pretty easy, perhaps apart from one riddle. But that one is just more unusual than difficult.

In Esklavos, one question remained for me:

Has anybody met the queen?

I don't think so.

Finally stuck in vhana. Not where Fontaine Diego says, a bit later, but I keep tryin'...

IGNORE THE BIRDS! They are a red herring.

Wasn't the person at Dragon Peak wearing some kind of head-gear?

In Free the Monkeys, I did not think that the

was much of a clue. It was more confusing than helpful.

Were there 2 endings for the Queen & the Dragon?

because i don't think I ever used the knife

I don't think there are two endings. Are you sure you didn't use that item?

I believe the knife is needed to get the string and gold coin, both of which are required to progress.

Hmm. I actually did use that clue, by

Regarding Free the Monkeys!

I am stuck from the start.

map and figure that it has to do with the color lock for one of the cages, but am confused about what colors to use from the map locations.

Any hints or nudges in the right direction?

if you use it in a certain location (say, one of the ones indicated on the map).

I clicked the buttons based solely on the number of flowers. Left button for five flowers, right button for three flowers, top row and then bottom row.

I did have an issue with the

not showing up (got a blank pop-up with the Nagamochi watermark). I could 'pick up' the items, but couldn't use them where needed. A save and reload fixed that, in case anyone else runs into the same issue.

I managed to solve the puzzle on the table without the use of refreshing the game. Same thing happened when

I picked up a puzzle piece inside the chest.

Both weren't game breaking (at least, on my side), but were annoying.

Hopefully this bug will be fixed.

@Oniya: Interesting...we interpreted the clue differently, but it works out to the same sequence!

Ok, you're right! I was convinced that "she" is a male person. :D
But now I see some tiny titties (I hope, it's not vulgar, I'm not a native speaker).

@hatospali I actually had to play through again to make sure I wasn't seeing things! XD

I had a problem with the picture on the wall, the hint said it was a clue but it just took me to the games page. I couldn't actually see the picture. I had to use a you tube video to see the picture.

That was tricky and not what I expected.

I had gone through all the possible color combinations (it seems) but they just were not working.

thank you, I was stuck there...

This is last week's "Weekday Escape" - or am I having deja vu???