It is Wednesday, and it... has... RISEN. Summoned by an offering of changing cursors, door locks, and random items with seemingly random purposes, Weekday Escape oozes forth from the bowels of the Earth! This week! Vitamin Hana locks you up with a dubious and demanding companion. Primera at least leaves out some refreshments to go with your puzzle solving. And Nagamochi Games puts a dragon under glass somewhere pretty in pink. 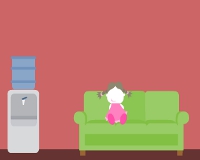 Give Me Everything - Normally the concept of being trapped in an escape game doesn't bother me, since typically you're talking about somewhere quiet and cozy I could conceivably catch up on some sleep. That all goes out the window when you include a creepy doll, Vitamin Hana. Okay, so maybe it's a little girl, but it looks like the sort of unsettling, early 1900s faceless ragdoll you'd find at a flea market before winding up as dubious internet creepypasta. Regardless, to escape, you need to bring the girl/doll everything she asks for, so get cracking! It's fine. You just need to give her everything. Including... YOUR SOUL. 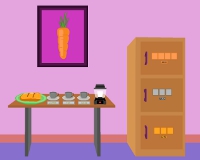 Afternoon Tea - See, now we're talking. If you're going to lock someone up, at least provide some snacks. Primera has everything you need to relax in this tiny room, excluding some sunglasses to prevent that colour scheme from searing your retinas, but that doesn't mean you can just rest on your proverbial laurels. There are still puzzles to solve, so start crawling all over the scenery and finding clues, because as thoughtful as that is, man cannot live on bread alone, literally, and once we're out of here, you and I are going for pizza. 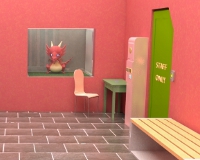 Escape With the Fire Dragon - I have to confess, I'm not entirely sure what's going on inside this weird but cute escape from Nagamochi Games, mostly because I can't read Japanese, which may trip you up a little as well, though a little ingenuity will get you far. Don't worry, you're not going to get flame roasted... the cute and chubby little dragon is under glass. Kinda makes you want to rescue it, doesn't it? To leave this pastel pink prison, you'll need to pay close attention to your surroundings, and maybe even have another look at clues you think you've already used. And play some video games.

In Afternoon Tea, the items will disappear after once their purpose has been fulfilled. For me, this meant ...

that because I solved the calendar puzzle (second cabinet) before I found the key (first cabinet) - the first cabinet emptied itself before I even opened it.

The picture in the post currently goes to Weekday Escape 111 from last week.

In Afternoon Tea, based on what Bobo The Bear noticed, that also means...

that the carrot cake disappeared once I took out the item hidden inside of it!

I should have eaten a slice before advancing!!!

Learn from my foolish error!

Regarding Escape with the Fire Dragon:

The very first start/intro screen has two boxes. One has a note and one has a note with a slash. If you want to start with sound in the game, pick the one with the note sans slash.

I suggest having the sound ON because the Fail and Succeed noises are quite cool and entertaining!

yellow candy is under cabinet near doors.

Hi Indie Gee! We appreciate you trying to help out your fellow players, but please make sure you use spoiler tags when giving out information like this. :) Many people prefer to play the game for themselves before they look for help, and spoiler tags allow them to check in on the conversation without having anything, well, spoiled! Please refer to spoiler tag help here: https://jayisgames.com/spoilerinfo.php

Creepy little girl/doll, trapping you until you fulfill her desires...

Some clues are read right to left, like some japanese text. This may trip you up at first.

Hey what's going with Green men escape games from No1games? Did they call it quits?

I don't know how many people will be playing this two months after the fact, but this hint isn't quite correct.

The clue in question isn't read right to left because it's Japanese...

It's upside down, if you look at the star and triangle.