Can you believe it? It's the 100th edition of Weekday Escape!... at least, since we started numbering them for clarity in our search results. BUT STILL. 100! That means 100 Wednesdays have been filled with free online games by developers who spend their time making escape games for people without asking anything in return, so before you congratulate us, send them a thank you, because we're just the messengers. This week! Funkyland has gone all red in the face, so maybe an apple or seven will help? no1game is throwing a party of their own, but nobody else has arrived. And Vitamin Hana is all about those numbers, 'bout those numbers, and puzzles! 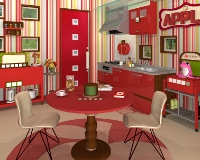 Fruit Kitchens No. 27: Apple Red - What is it about FunkyLand's retro-tastic gleaming kitchens that makes you want to go buy one of those cute frilly aprons and spin around in circles? Probably a devious combination of the bouncy soundtrack and the kitsch, which is just the way we like it! This time, we're raiding the proverbial pantry for seven apples, which, as you might expect, are hidden behind some tricky mechanisms and puzzles. I was going to say these are the sorts of games Alton Brown would design if he made games, but, well, considering how he feels about the lack of multitaskers, these one-off puzzles would probably be out of the question for him in favour of more wacky camera angles. 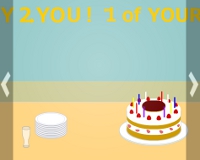 Find the Escape-Men Part 168: Birthday Party Hall - Can we just appreciate the fact that no1game is coming up on their 200th Escape Men title? I feel like that deserve some appreciation, and maybe a little frightened awe from those of us who can't even remember to take our vitamins for a week in a row. As this particular game opens, you've been invited to someone's birthday party, and are instructed to make yourself at home until the other guests arrive. You know what that means... looking in, around, and under every nook and cranny (sometimes more than once!) to find our favourite little green men. 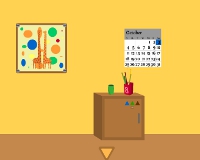 Number It! - A lot of escape games have puzzles you need to solve by deciphering numeric codes, and Vitamin Hana has always been fond of locks and latches that need specific digits to open. In this tiny space, you'll be going to and fro, and then fro again, to find the codes to unlock everything you need, with a little bit of smashing thrown in to satisfy us violent video gamer types as per media expectation. The design is tidy enough that you won't get lost, but you may get a little hung up on needing to combine things in a specific way (such as one half of a combination being zoomed in on with "About Item" rather than the other), but I believe in you!

Yay! *throws confetti in a pattern that might give a clue on how to open a cupboard* \(^_^)/

Thanks for 100 collections of great escape games! :) Somehow, it's really cool to realise how many escape games we've come across over time and of course, I want to keep going! ;)

Btw, I love reading the reviews. They always make me smile. :D

Wow, I find this Fruit Kitchen to be significantly harder than its predecessors. I am not seeing any hints for the colored dolls, the four apple buttons below the sink, or the five buttons (?) on the table. Nudge, anyone?

the dolls and the apple buttons (in two spaces) are related.

Just one more apple to get... anything available to climb on???

Never mind. Dumb question. Something can be used twice.

All right, Funkyland, where did you hide the @#$%! can opener this time?

You can make two different 5-letter words with those letters.

As always seems to be the case, I'm stuck with 9 of 10 little green men found. I've got them from


1. the end of the garland;
2. on top of the cake after entering the candle code;
3. floating on top of my glass of soda after it went flat;
4. on the back of the CD after cleaning it;
5. floating up as a music note once the CD is playing right;
6. jumping out of the present;
7. farther inside the present;
8. inside the birthday card;
9. under the edge of the tablecloth;

I'm pretty sure #10 will somehow involve

the can of lubricant spray and the incomplete set of bowling pins,

but I have no idea how to combine them. Any hints?

Also, congrats for getting 100 weekday escapes! These (and new comic book day) are the best part of my Wednesday, thank you for doing them ^_^

Use the lube on the area in front of the bowling pins, use 5 little green guys as spare pins, and yet another green guy as a ball (guess that's why you need to make the ground slippery? to make him roll right?). Be sure to click the pins, not the green men acting as pins, else you take all your green guys back instead of going bowling.

Congratulations!!! Thank you so much to all at JayIsGames and all of the games' developers for all of your hard work, it is very much appreciated!

The cake code has me stumped ... I do see the color and arrow clues, but I've tried dozens of combinations and nothing works ...

Happy 100th! I look forward to this every Wednesday. Thanks for all your hard work!

Detailed hint-through for the candles on the cake in EM -- Skip to the bottom for a quick summary and the code.

There are two parts to the code.

If you look at the colors of the candles on the cake, you'll notice that

there are two of each color, with the left side and the right side of the cake each having one of every color.

If you look at the banner on the wall (zoomed out), you'll see,

If you look at the banner on the wall (zoomed in):

- By clicking near the number 2

You'll see a garland with the color sequence

- By clicking near the number 1

You'll see a garland with the color sequence

From observing the candles and the banner zoomed out, we can conclude the order of the parts of the code and where to enter them.

From observing the banner zoomed in, we can conclude the order that the colors need to be entered.

The arrows on the numbers indicate the direction in which the corresponding color sequences ought to be entered.
Thus

All together, we know that

Thus the code is:

Blue White Purple Yellow Red entered using the candles on the right half of the cake,

then Red White Blue Yellow Purple entered using the candles on the left half of the cake.

This was without a doubt the best Funkyland Fruit Kitchens game yet! The difficulty was ramped up a significantly but every puzzle was completely fun and logical. Please build on this Funkyland!

I'm getting a bug attempting to get the last escape man in Birthday Party Hall.

After I bowl using the green men I only end up with 9 and there's no way to reset and bowl again.

Did anyone else have this problem?