Ever since the unearthing of The Great Gatsby NES game, 8-bit-lovers worldwide having been searching for the next lost retro work. Watergate: The Video Game, could very well be that. Now some may claim that this point-and-click adventure game, an apparent sequel to the seminal Shadowgate, was actually created only recently by famed Funny Or Die comedian Samuel Kim, which explains why the game's investigation into the conspiracies of President Richard M. Nixon quickly take more than a few hilariously surreal turns. 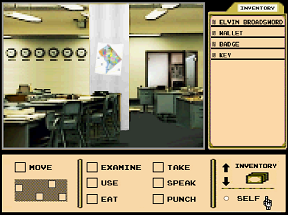 Watergate plays a lot like the classic MacVentures the game is a clear riff on. A map of available exits and a list of commands is available at the bottom of the screen, and your current inventory appears to the side of the main display window. Players make progress by clicking the desired command then the desired object, collecting evidence, visiting different locations, and being confounded at every time. Sometimes the constant command clicking is a little annoying, but it was annoying when you tried to play Uninvited on the NES, and, if anything, Watergate commits to the joke with all its pixelated heart.

A wry combination of video game parody, pop culture riffing, political satire, feverish adventure-game logic, raunchy one-liners, and bits of stunning historical accuracy made all the more comedic by how rarity, Watergate tries to be a lot of things, and it generally succeeds. It leans much closer to Dick than All The President's Men, as you might expect. As source material combinations go, 1970s investigative journalism and the Nintendo back-catalogue isn't exactly chocolate and peanut butter, but kicking around Nixon is almost as much a comedic trope as a pie-to-the-face, and more jokes work than don't. For a concept that might have proven its point with a photoshopped game cartridge, Watergate is an impressive piece of comedic, and players with an interest in, and a minimal amount of respect for, American history should definitely check it out.

At the Cemetery, the last grave is covered in ivy. Digging up the ground in front of the grave earns you another bad end courtesy of G. Gordon Libby.
Thanks, Xelkelvos, for finding this one!

The link to the game says "Stargazers" instead of "Watergate".

Ha! That was fun. I especially liked the end, when you

kill Nixon with the First Amendment.

At the Cemetery, the last grave is covered in ivy. Digging up the ground in front of the grave earns you another bad end courtesy of G. Gordon Libby.
Thanks, Xelkelvos, for finding this one!

Another Bad End of note:

At the Cemetery, the last grave is covered in ivy. Digging up the ground in front of the grave earns you another bad end courtesy of G. Gordon Libby.

A few of the early jokes were funny, but at the end it relied a bit too much on over-the-top parodies.

I like that it was short and straightforward, though. If the game was long, or if the puzzles were tricky enough to get you stuck I might not have played through to the end.

That's the only way the concept would have worked anyhow. The story would have to be a degree of magnitude more involved and interesting to make it worth the effort of Shadowgate or Deja Vu difficulty puzzles.

There's a big blank spot on the floor where there should be a newspaper. Only 'Examine' seems to recognize it. Everything else is nada.

If you dig up the left grave you find a zombie.